Queen of Jerusalem and

The Tragic Tale of a Child Queen 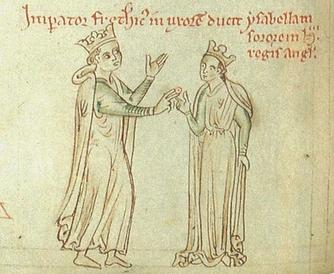 Although the Holy Roman Emperors were staunch supporters of the crusades and the crusader states, it was not until Frederick II Hohenstaufen married the heiress to the crown of Jerusalem that the Holy Roman Emperors attempted to exert sustained control over the Kingdom of Jerusalem ― leading to a bitter civil war between the Imperial faction and rebellious barons. The dynastic link that gave the Hohenstaufens a claim to rule in Jerusalem is, therefore, an important historical figure. Yet there are few figures in history that so completely exemplify the tragedy of being born to power ― particularly for women ― as Yolanda of Jerusalem

Yolanda became Queen of Jerusalem within days of her birth in November 1212. Her mother, Maria de Montferrat, through whom she derived her titled, died of complications of giving birth of Yolanda, her first and only child. Maria was just 20 years old at her death.

Yolanda was thus a half-orphan almost from birth, and her father, John de Brienne, was a parvenu new-comer to her kingdom. Immediately voices were raised that questioned her father’s right remain king. Based on the precedent set twenty years earlier, when Queen Sibylla had died, it was argued that the kingdom passed to the infant Yolanda, and the regency during her minority should be exercised by her closest adult relative on her mother’s side - the side from which she inherited the throne. John de Brienne was able to rally sufficient support for his claim to be regent for his infant daughter to retain his crown, but his position was clearly undermined.

Less than two years after the death of Yolanda’s mother, John de Brienne married a second time, the Armenian princess Stephanie. Yolanda would still have been a toddler, largely in the care of nannies, and Stephanie might well have become a mother to her.  Perhaps, for the next six years, Yolanda had what we could consider a degree of security and happiness surrounded by her father, step-mother and, soon, a baby half-brother, as well.

That idyll, if it ever existed, was shattered when both Stephanie and her son died in early 1220. Furthermore, they died in a period when the Kingdom of Jerusalem was under attack from the Sultan of Damascus. The city of Caesarea was captured and sacked, and justifiable fears that other crusader cities might suffer the same fate induced John de Brienne, other Syrian barons, and the Knights Templars to abandon the Fifth Crusade in order to defend the Kingdom of Jerusalem directly. Yolanda would have been seven years old ― old enough to feel the pain of losing the only mother she had ever known and her little brother and old enough to sense the fear and alarm that had brought her father back.

Any joy she felt at seeing her father again, however, was short-lived. John returned to Egypt and the Fifth Crusade, where his advice to trade Damietta (held by the crusaders) for Jerusalem (held by the Ayyubids) was ignored. Instead, the crusade made the fatal mistake of trying to march on Cairo - a strategy that ended in a debacle. John himself had to stand hostage for the implementation of the negotiated settlement.

John returned home to his now eight-year-old daughter, but not for long. In early 1221, he set off on a grand tour of West intended to raise money and troops for a new crusade. He would never again set foot in the Kingdom of Jerusalem. Instead, for the next years, he traversed Europe, getting as far to the north as England and Cologne, but spending more time in Italy and Spain. During these travels, he secured a third wife, Berengaria of Castile, for himself and also negotiated the fateful marriage of Yolanda with the Holy Roman Emperor.

And Yolanda? Just nine-years-old when her father departed, she was not yet thirteen, when she married Frederick II by proxy in Acre. The historical record tells us nothing about her activities in this period, and we can only assume that she was undergoing the kind of education thought suitable for queens in this period. Most probably that education was entrusted to one of the convents that traditionally took daughters of the higher nobility into their ranks as pupils, nuns, and abbesses.

The quality of such an education should not be underestimated. Convents had a long tradition of being centers of learning, and in the early 13th century were still home to intellectual inquiry and debate. At a minimum, Yolanda learned to read and write in French and Latin, but she may well also have learned Greek, given how widespread the language was in the Holy Land and the existence of many religious texts still available in the original Greek.  She would have been expected to know Christian dogma and theology, which entailed reading not only the Bible but other religious texts as well. (This was before the age of fundamentalism that reduced everything to the Bible.) She would have been expected to command arithmetic, though not necessarily geometry or algebra, and to know the history of her own kingdom and that of its most important supporters such as the Holy Roman Empire, the Kings of France and England. She would probably have been educated about the kingdom’s enemies as well, possibly including some knowledge of Arabic; many of the nobles in the kingdom were fluent in the language. Some knowledge of the natural sciences, particularly human biology and fundamental recipes for treating common illnesses and injuries, might also have been included in the curricula.  Mandatory would have been manners, protocol, spinning, and needlework.

Yolanda’s education would hardly have been considered “complete,” however, when envoys from the Holy Roman Emperor arrived in Acre with the news that her father had negotiated her marriage to the most powerful monarch on earth, the man already calling himself “the Wonder of the World.” The wedding followed almost immediately. Still only twelve years old, she was married by proxy to Frederick in Acre and crowned Queen in Tyre, before setting sail with a large escort of prelates and noblemen for Apulia. She arrived at Brindisi and married Frederick II on November 9, 1225; it was literally just days before or after her thirteenth birthday.  Her bridegroom was a thirty-year-old widower, who already maintained a harem in the Sicilian tradition.

The marriage got off to a terrible start. John de Brienne had negotiated for the marriage with either implicit or explicit assurances from the Emperor that John would remain King of Jerusalem until his death.  He saw the marriage of his daughter to the Holy Roman Emperor as a means of securing aid in the form of loans and troops, as well as a means to secure the viability of the kingdom after his death. Frederick Hohenstaufen, however, declared himself King of Jerusalem the day after the wedding ― and made the barons who had escorted Yolanda to Italy swear fealty him at once.

John de Brienne was outraged, and so was the Master of the Teutonic Knights, Herman von Salza, who had been instrumental in the negotiations.  The latter fact strongly suggests that Brienne had not simply been deluding himself.  It appears that Frederick had been intentionally misleading about his intentions, or had lied outright. In any case, Frederick instantly made an enemy of his father-in-law, and the breach ensured that Yolanda never saw her father again before she died.

Perhaps, given how often he had been away during her short life, she did not miss him, but she certainly found no comfort or companionship from her husband. Although it is hard to distinguish facts from propaganda, the tales of Yolanda’s marriage are unremittingly negative. The horror stories start with one contemporary chronicle that claims Frederick scorned his little bride on the wedding night itself, preferring to seduce one of her ladies instead. Several sources agree that “soon after the marriage, Frederick imprisoned, or otherwise maltreated, his wife.” (Perry, Guy. John of Brienne: King of Jerusalem, Emperor of Constantinople, c. 1175 – 1237. Cambridge University Press, 2013, p. 135.)

Within a six-month, Yolanda’s father was openly at war with her husband by supporting the ever rebellious Lombard League.  Allegedly, the frustrated Emperor took out his rage on his thirteen-year-old bride, beating her so brutally, according to the Chronicle of Ernoul, that she miscarried the child she was carrying. Whether her husband’s abuse was the cause or not, Yolanda certainly miscarried a child at about this time, still only thirteen or at most fourteen-years-old.

Meanwhile, Frederick was under increasing pressure to fulfill his repeated promises to go to the aid of the Holy Land. He had first taken crusading vows in 1215, and eleven years later he had nothing but excuses to show for it. During the negotiations for his marriage to Yolanda, he had promised to set out on crusade no-later-than August 1227, or face excommunication.  In the summer of 1227, a great army was assembled in Apulia with the goal of a campaign in defense of Christian Syria, but before the crusaders could embark they were devastated by a contagious disease that killed thousands.  Frederick boarded a vessel but was so ill that his companions urged him to return.  Frederick put about and landed not in the Holy Land but in his own Sicily. He was promptly excommunicated by the Pope.

And Yolanda? She was still imprisoned in Frederick’s harem. He had not even thought to take her with him when he set out for her kingdom. She was also soon pregnant again.

On May 5, 1228, ten days after being delivered of a son, Yolanda of Jerusalem died. She was not yet sixteen years old. Although she had been a queen almost from the day of her birth, not once had she exercised the authority to which she had been born.

Frederick hardly took any notice of the fact. He continued to claim her kingdom as his right ― despite having denied his father-in-law the exact same dignity. Frederick II consistently ignored legal principles that got in the way of his own power.  Because of this disregard for the laws and customs of Yolanda’s kingdom, he soon found himself at loggerheads with the barons of Jerusalem. In the end, Yolanda’s subjects defeated her husband, but only decades after she had been sacrificed on the altar of her father and husband’s ambitions.

Striking is the extent to which Yolanda was a helpless pawn in this game of kings, popes, and barons. It is particularly striking when one considers how powerful her predecessors had been. Queen Melusinde commanded the support of barons and bishops to such an extent that her husband was forced to submit to her will. Sibylla refused to cave in to pressure from her brother King Baldwin IV and foisted her (utterly unsuitable) candidate for king upon the entire kingdom. Isabella I divorced one husband and married three others for the benefit of her kingdom, but she was never pushed off the stage, never imprisoned, neglected or ignored. She was Queen of Jerusalem still, after her fourth husband’s death.

Was it just circumstances, particularly Yolanda’s youth, that condemned her to a life little better than a slave? Or was it the play of personalities? Emperor Frederick was certainly full of overweening pride and arrogance, but would a different girl have been better at confronting him and defending her undeniable rights?  We will never know.

Yolanda plays a minor role in Rebels against Tyranny, and the tragic consequences of her marriage to the Holy Roman Emperor form the main plot of this novel, the first in a new series set in the crusader states. Although Yolanda's early death meant she could not play a role in the rebellion against her husband’s autocratic policies, I wanted nevertheless to give her a voice and face.