Hollywood made him a blacksmith; Arab chronicles say he was like a king. He fought Saladin to a standstill, yet retained his respect. He was a warrior and a diplomat both: The true story of Balian d'Ibelin. Book II

The Kingdom of Jerusalem is under siege. The charismatic Kurdish leader, Salah al-Din, has united Egypt and Syria and has now declared jihad against the Christian kingdom. While King Baldwin IV struggles to defend his kingdom from the external threat despite the increasing ravages of leprosy, the struggle for the succession threatens to tear the kingdom apart from the inside. 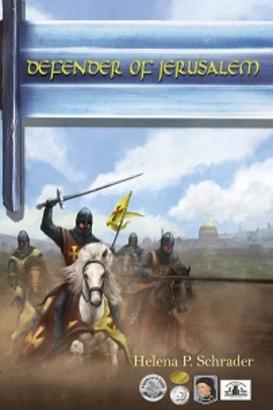 "This is a do-not-miss series that you will keep on your shelves in order to read again and again, with each time awakening more emotion and bringing Balian's valiant history to life. ... This is a book that is biographical, yes. But the real meat and bones of this story are the emotions. Everything from war to suspense; romance to kindness; good to absolute evil - and even the presence of the well-known and well-read Templar crusaders - everything is offered by this writer in order to bring Balian's life, as well as the fight for Jerusalem, into full-blown Technicolor." -- FEATHERED QUILL

"Dr. Schrader brilliantly synthesizes the roles of academician and master storyteller. In contrast with 'Kingdom' director Ridley Scott’s careless plot construction and deliberate distortions, Dr. Schrader has meticulously constructed an accurate geographical, environmental, political, and familial landscape using the proven historical record, as well as created finely drawn lead characters from the relatively scant existing information on the life of Balian, the more extensive records of Baldwin, and the numerous but oft-conflicting accounts of Salah ad-Din. The many supporting and minor characters, from the beautiful and wealthy Maria Comnena to the humblest servant, are brought to life with equal assurance." REAL CRUSADES HISTORY

"This book deserves more than five stars. I was up until 02.00 this morning because I just could not put the book down. A brilliant second book. The writing is so good, you are transported to "The Horns of Hattin" and along the ramparts of Jerusalem looking down on the thousands of Saracens." An Amazon Reviewer

"Being a Crusades fan, I knew how all the major events would play out but it is a testament to the true amazing talent of Helena that her book still managed to get me excited in the story and engrossed in the reading." An Amazon Reviewer