A landless knight, a leper king, and the struggle for Jerusalem...

Balian, the landless son of a local baron, goes to Jerusalem to seek his fortune, but instead, he finds himself serving the young prince suffering from leprosy.  The unexpected death of King Amalric makes the leper boy King Baldwin IV of Jerusalem, and Balian's prospects begin to improve.

Meanwhile, the charismatic Kurdish leader Salah ad-Din has united the forces of Syria and Egypt and vowed to drive the Christians into the sea.... 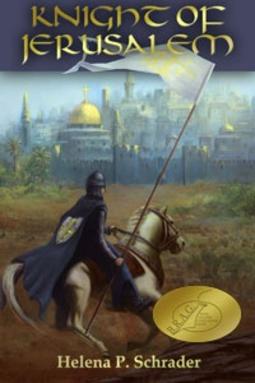 "Dr. Schrader brilliantly synthesizes the roles of academician and master storyteller. In contrast with 'Kingdom' director Ridley Scott’s careless plot construction and deliberate distortions, Dr. Schrader has meticulously constructed an accurate geographical, environmental, political, and familial landscape using the proven historical record, as well as created finely drawn lead characters from the relatively scant existing information on the life of Balian, the more extensive records of Baldwin, and the numerous but oft-conflicting accounts of Salah ad-Din. The many supporting and minor characters, from the beautiful and wealthy Maria Comnena to the humblest servant, are brought to life with equal assurance." Real Crusades History

"The author brings romance, chivalry, the fury of battles, and the turbulence of the time vividly to life as she lays the ground work for the next two volumes that we hope will indulge us more about the fascinating Balian and his exciting true adventures in this little known time of great upheaval where East meets West and the future of today's world is shaped." Chanticleer Reviews

"The Knight of Jerusalem by Helena P. Schrader I found amazing. This first book of the trilogy of Balian of Ibelin had me hooked from the first page." An Amazon Reviewer

"After reading Schrader's tale, I cannot imagine why Ridley Scott chose to veer so far from the historical record in his film. Balian's actual life was full of intrigue, heart-wrenching personal choices and courage. I am definitely looking forward to Schrader's next installment, Defender of Jerusalem, due to be released in September 2015." An Amazon Reviewer