Emperor Frederick II spent less than a year in the Holy Land, and ruled For 43 years by proxy.  His poor choice of champions helped spark a civil war.

The opposition to the Holy Roman Emperor was led by John d’Ibelin, Lord of Beirut, supported his large kinship network, the majority of the local barons and knights, the Templars, Genoese and the common people of Acre. The imperial faction was led most forcefully by Sicilian nobles appointed by the Emperor, notably his admiral Richard Filangieri, and supported by the Pisans, Hospitallers, and a minority faction in Outremer.

While local support for the Emperor in the Kingdom of Jerusalem was fluid and declined over time as Filangieri alienated more and more of the Franks, on Cyprus the Emperor enjoyed strong support from a minority faction of local lords and knights led by Sir Amaury Barlais, Gauvain de Cheneche, Amaury de Bethsan, William de Rivet, and Hugh de Gibelet. These five men were briefly appointed joint regents (baillies) of Cyprus by Frederick II and are widely referred to as “the five baillies.” They commanded the loyalty of 80 knights, or effectively 20% of the Cypriot feudal elite.

What explains the difference between Jerusalem and Cyprus? Where did the local opposition on Cyprus come from and why?

Philip de Novare explains the bitter divide in Cypriot society entirely in terms of personal jealousies and resentment. He tells a colorful tale of Sir Amaury Barlais trying to murder a knight he accused of cheating in a joust.  According to Novare, although he failed and was pardoned for the attempt, the hostility and mutual suspicions between Barlais and the Ibelins started with this incident and festered thereafter.

Certainly Amaury Barlais’ attempted to oust Philip d’Ibelin as “baillie” of Cyprus sometime after 1224 and before 1227. (The exact date is unknown.) The sequence of events is as follows. In 1218, King Hugh I died, leaving as his heir a nine-month-old son, Henry, and a widow, Alice de Champagne, who was a niece of the Ibelin brothers John and Philip. According to the constitution of the kingdom, Alice, as the king’s closest blood relative, was recognized as the regent of the kingdom. However, Alice (for whatever reason) chose not to take up the reins of government. Instead, she contented herself with the bulk of the revenues while turning the business of ruling over to her uncle Philip d’Ibelin. Significantly, this choice of actual (as opposed to nominal) regent was agreed to in the High Court of Cyprus, and the members of the High Court (i.e. the knights and nobles of Cyprus) took an oath to support Philip until King Henry came of age at 15.

Sometime in 1224, Alice had a falling out with Philip d’Ibelin (probably over money) and decided to marry a second time (she was roughly 30 years old at this time). She chose as her second husband Prince Bohemond of Antioch, and moved to Antioch, leaving her children by her first marriage behind. Sometime thereafter she appointed Amaury Barlais as her “baillie,” presumably on the expectation that he would be more amenable to her demands.

Her appointment of Barlais, however, lacked the consent and approval of the High Court. This was unconstitutional (even if the members had not sworn allegiance to Philip “until Henry came of age”) and so the High Court rejected Barlais’ claim to be regent for Alice of Champagne. This probably had less to do with preferring Philip d’Ibelin over Amaury Barlais than with preserving the privileges of the High Court itself; the members could not accept Barlais without surrendering their own prerogative to designate regents/baillies.

However, at this point, one of the knights in the High Court and a relative of the Ibelins, a certain Anseau de Brie, took things a step farther and accused Barlais of treason for accepting and attempting to claim the appointment. Brie challenged Barlais to judicial combat. Brie was a large and powerful man; Barlais was slight of stature. The latter fled back to Syria.

This is where the rivalries of Cyprus became entwined with the policies of the Holy Roman Emperor. This accusation of treason apparently occurred near to the time when Yolanda of Jerusalem married Frederick II. Barlais recognized that the Emperor Frederick could be a very powerful ally in his struggle with the Ibelins, and he set about winning the Emperor’s favor.

It may also have been at this point that Barlais became allied with Sir Gauvain de Cheneche, who had already gone to the Emperor’s court from Cyprus after a judicial combat that went poorly for him. Cheneche was reputedly very good with falconry, a passion of Frederick II, and had thereby won the Emperor’s favor. Together Cheneche and Barlais complained about the Ibelins to the Emperor.

The Ibelins, although uncles of the Emperor’s new wife Yolanda, had already earned Frederick II’s disfavor by crowning Henry king of Cyprus, while the latter was still a child of seven. Based on German law (not the law of Outremer), Frederick II claimed that he (not Alice de Champagne) was the rightful regent of Cyprus and viewed the crowning of the young king as an attempt to pre-empt him. The coronation very probably was an attempt to check-mate the Emperor, but it was at least based on the law of the land rather than the law of the Holy Roman Empire. Nevertheless, it meant that Barlais’ complaints about the abuse of power by the Ibelins fell on open ears. It did not help the Ibelin cause that Frederick II apparently had no respect or affection for his wife, their niece, Yolanda.

Again according to Novare, in anticipation of the Emperor’s immanent arrival Barlais returned to Cyprus and accepted judicial combat with Brie. What he thought to achieve by this is unclear, but the resulting trial by combat is described in detail by Novare. Barlais won an early advantage when he succeeded in prying Brie’s visor open. He stabbed Brie three times in the face before Brie managed to wrest the lance from Barlais’ hand and fling him to the ground, injuring him. Brie, who was still mounted, should have been able to dispatch Barlais, but when the latter ran to the perimeter barriers, his loyal horse again and again put himself between Brie and his master so Brie could not deliver the coup de grace. Eventually, the judges – the Lord of Beirut and his brother-in-law the Lord of Caesarea, who was also Constable of Cyprus -- intervened to prevent Barlais’ death. Yet Barlais felt he had been humiliated a second time and returned to the Emperor’s court full of yet more bitterness against the Ibelins.

Historians, notably Peter Edbury, are reluctant to accept Novare’s account and explanation of the conflict. Edbury points to the fact that the five baillies all came from the second generation of families that had helped establish Lusignan control over Cyprus. He argues that these men opposed the Ibelins because the latter were perceived as “parvenus” in Cyprus. (See Edbury’s The Kingdom of Cyprus and the Crusades 1191 – 1374 and his John of Ibelin and the Kingdom of Jerusalem.) He suggests they legitimately resented Ibelin prominence in the reign of Henry I because the Ibelins had not set foot on Cyprus before 1210 and been inveterate opponents of Guy de Lusignan in the previous century.

While there are legitimate grounds for doubting the Ibelins were “late-comers” to Cyprus (see:Ibelins on Cyprus) resentment of Ibelin prominence remains the most reasonable explanation of the hostility of this minority.

This does not mean that Novare’s detailed descriptions of duels and violent arguments were fabricated. Rather, he has described events that reflected more than caused the tensions. Yet while Edbury is right to point out that the Ibelins were not universally popular, we should not lose sight of the fact that the Ibelins retained the support of the overwhelming majority (80%) of Cypriot knights and nobles. Perhaps even more telling, they retained the affection and favor of their young lord, King Henry I of Cyprus right until his death decades later.

Philip de Novare's account of the Emperor's crusade and the civil war in the crusader states is the primary source for the events described in a new series of novels set in Outremer in the early 13th century staring with: Rebels against Tyranny. 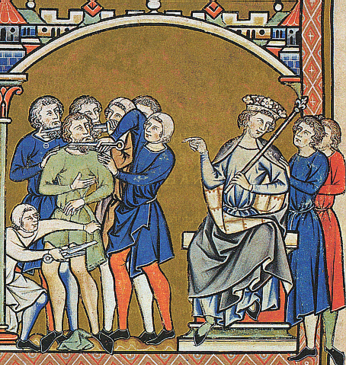