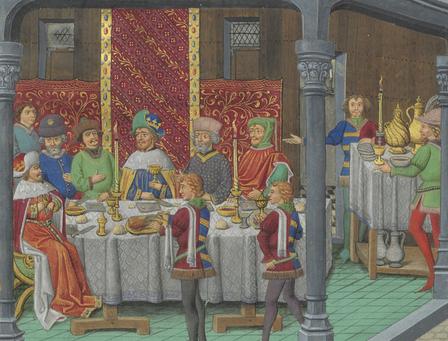 the start of a Civil War

Emperor Frederick vowed to liberate Jerusalem at his coronation as "King of the Romans" (Germans) in December 1212, and renewed that vow many times afterwards. Yet when he finally arrived in Outremer on July 21, 1228, the first thing he did was to alienate one of his most powerful vassals by a trick more worthy of a pirate than an emperor and a crude attempt at extortion.  His actions were so astonishing  that not even his admirers attempt to justify them; they prefer to simply ignore them altogether. It all started with a sinister banquet...

In July 1228, when the Emperor Frederick finally arrived on his long-awaited crusade, his first port of call was Limassol in the Kingdom of Cyprus.  This King of Cyprus was at this time an eleven-year-old boy, Henry, not yet old enough to rule for himself. In accordance with the laws of Cyprus, the High Court of Jerusalem had recognized Henry's mother Alice as his regent, but because she chose not to exercise that office, the High Court had elected a "baillie" to act in her stead. In July 1228 this was John d'Ibelin, the Lord of Beirut, who held large fiefs in both the Kingdom of Jerusalem and the Kingdom of Cyprus.

On his arrival in Limassol, Frederick sent a very pleasant letter to the Lord of Beirut, the text of which was recorded in contemporary accounts. This letter addressed Beirut as "my lord and honored uncle," and explained that "we desire to have the satisfaction of seeing you with the king and your children, all our dear and well beloved cousins, that we may have the pleasure of embracing you and knowing you personally."(1) The Emperor closed the letter with "Your very affectionate nephew, Frederick Emperor."(2) (Beirut was an uncle of the Emperor's late Empress, Yolanda of Jerusalem.)

Despite the outward tone of the letter, Beirut's friends and council smelled a rat. Whether they had intelligence from other sources or simply mistrusted the Emperor generally, Beirut's council unanimously advised him not to attend upon the emperor. Beirut insisted on going, saying explicitly that he would rather be arrested or killed than have it said that he by his refusal to work with the emperor had ruined a chance of recovering Jerusalem. This underlines the fact that despite the emperor's words, Beirut knew that he was out of favor. He was not taken in by the emperors words of friendship, but rather determined to do all in his power to patch over their differences in order to increase the prospects of a successful crusade. Ibelin pointedly and consciously put the liberation of Jerusalem ahead of his personal security and status.

So Beirut took King Henry to Limassol, accompanied by the entire Cypriot army, both knights and sergeants, and also his three adult sons, Balian, Baldwin and Hugh. On arrival in Limassol, the Emperor welcomed them with the appearance of joy, and they dutifully submitted to the Emperor's leadership, pledging their bodies and worldly goods in his service in the impending crusade. The Emperor further begged that they set aside the mourning they were wearing for Beirut's brother Philip, and instead accept robes of scarlet from him. He also personally invited them to attend a great banquet he would hold for them the next day. Beirut, his sons and vassals readily agreed.

Yet, on the same night as the invitation, "the Emperor caused to enter secretly by night three thousand men-at-arms or more, sergeants, arbelesters, and sailors, so that nearly all the fighting men of his fleet were there; and they were disposed throughout the stables and rooms."(3)

On the next day, the guests came unarmed in the lavish robes the Emperor had given them and insisted that they wear. The Emperor sat at a high table flanked only by the Lord of Beirut and Beirut's brother-in-law the Lord of Caesarea. Furthermore, as a mark of "favor," Beirut's eldest sons were designated to serve the Emperor, "one with the cup , the other with the bowl, while the young lord of Caesarea and Sir Anceau de Brie should carve before him."(4)

When the last course was brought in, "armed men came out from those places where they had been posted and they took possession of the palace...some holding the hilts of swords and others daggers."(5) Only after his armed men had surrounded the unarmed Cypriots did the Emperor show his true colors. Now he turned to the Lord of Beirut and demanded that he 1) surrender the revenues he had stolen from Cyprus during his own and his deceased brother's terms as baillie of Cyprus, and 2) that he surrender his title and lordship of Beirut.

Beirut first tried to dismiss the claims as a "poor joke" and suggest the Emperor had been listening to evil gossip, but the Emperor insisted that he would have Beirut's lordship and allegedly ill-gotten gains or he would arrest him. Despite being unarmed and surrounded by the Emperor's troops, Beirut replied that he has received his lordship legally from his half-sister Queen Isabella and had made a full accounting for the revenues of Cyprus. Nevertheless, he asserted he would be happy to put his case before the respective High Courts. He would not surrender either lordship or revenue, however, without a judgement of the appropriate court. The Emperor grew more enraged, declaring: "I shall show you that your wit and subtlety and your words will avail naught against my force." (6)

Apologists for Frederich Hohenstaufen are quick to point out that the Lord of Beirut and his brother before him had been tenacious and used dubious legal tricks to remain in the position of "baillie" of Cyprus after their falling-out with Queen Alice. They suggest that Beirut very probably did have something to hide. Possibly.  Yet no one has ever been able to come up with even a shadow of a justification of why he should not have been entitled to the Lordship of Beirut, a lordship he built up at great expense after it had been devastated by years of Saracen occupation and a violent re-capture by German crusaders.

Furthermore, even if Beirut was guilty of one of the "crimes" -- which is far from proven simply because historians think it possible -- that hardly justifies the Emperor's action. The Emperor, allegedly the protector of law and justice, baldly stated that he didn't give a damn about the law and courts; he declared bluntly that "might was right." He did not offer counter-arguments, nor agree to put the case before a court of law, but simply threatened the use of force like the most illiterate and rapacious robber baron.

Beirut refused to be intimidated by the Emperor's threats. He said he would accept the fate Christ decreed, but he would surrender nothing without due process and a judgement of the High Court.

At this point the many lords of the Church tried to mediate. The best they could negotiate, however, was that Beirut would surrender 20 hostages as surety that he would submit himself to the judgement of the respective High Courts. The Emperor demanded that Beirut's eldest sons be among the hostages. The Emperor noted to Beirut as he made the demand, "I well know that Balian is your very heart and that so long as I have him I shall have you."(7)

It is hardly surprising that an Emperor who felt he had the right to simply take away fiefs and demand bribes (for demanding the "repayment" of revenues that have not been stolen in the first place is extortion) at the point of a sword did not keep his word about "honoring" his hostages either. Although not even Emperor had accused the hostages of wrong-doing, Beirut's sons were "put in pillories, large and exceedingly cruel; there was a cross iron to which they were bound so that they were able to move neither their arms nor their legs, and at night the other men were put in irons with them."(8)

The actions of an "enlightened," "modern" and "tolerant" monarch? Not in my opinion!

This incident is an important episode and its consequences are an important thematic element in: Rebels against Tyranny.