When the Holy Roman Emperor Frederick II married the heiress of Jerusalem in November 1225, Christendom expected that he, the most powerful Christian monarch, would restore Jerusalem to its former glory. Instead, Frederick II spent less than eight months in the Holy Land and departed draped in the offal and intestines pelted at him by his furious subjects. Furthermore, he never returned, although he sent lieutenants to fight for him in a civil war that lasted two decades. That struggle ended in a complete and utter defeat for the Imperialist faction. Although Frederick’s son and grandson were nominally “kings” of Jerusalem, they were powerless and absent throughout their “reigns.”

The Hohenstaufens failed so miserably in the crusader states because of a fundamental clash of ideology and culture that was only plastered over with legal arguments. Below is an analysis of the ideological conflict underlying that confrontation.

Biographers of Frederick II are understandably apt to ignore the Hohenstaufen’s utter and complete humiliation in the Holy Land. His life was so packed with dramatic events, colorful characters, and significant victories that there hardly seems any room or reason to discuss, much less analyze, his poor showing in the crusader kingdoms. Frederick’s admirers prefer to focus on the bloodless return of Jerusalem to Christian control, and to dismiss his critics as “blood-thirsty” and “bigoted.”[i]

Even a comparatively balanced observer such as David Abulafia,[ii] who concedes that the baronial opposition was “ideological,” deals with the consequences of Frederick’s policies in the Kingdom of Jerusalem in just one page of his 440-page biography.  Abulafia notes that “the emperor began by assuming that it would be sufficient to proclaim his rights as he interpreted them.” Yet the fact that the Emperor’s “rights” could legitimately be interpreted otherwise is glossed over. Abulafia then explains how hard the Emperor found it hard to “envisage the degree to which the Latin states of the East, despite the bitter threat from the Islamic world, were divided by family rivalries and constitutional conflicts,”[iii] but fails to acknowledge that the Emperor had created both those rivalries and the constitutional crisis in Jerusalem. Finally, he clearly sympathizes with his subject when he notes that Frederick was “amazed by the lack of response to what he clearly saw as his own tremendous achievement.”[iv] Abulafia too cannot comprehend why the residents of Outremer saw nothing valuable in the Emperor thumbing his nose at the pope and then leaving them to face the consequences of his self-serving truce. According to Abulafia, Frederick II “returned to Italy more than ever conscious of his imperial rights,” ― and that was exactly the problem.

Frederick II viewed the Kingdom of Jerusalem as just one of his many possessions without recognizing it as an independent kingdom with its own traditions, customs, and laws. He believed he could dispose of it as he liked, rule it as he liked, and that the inhabitants held their lands and titles not by heredity right or royal charter but simply at his personal whim. In short, he treated fiefs as iqtas, thereby violating the fundamental principles of feudalism that recognized that not even a serf could be expelled from his land without due process and just cause. He also, and even more significantly, rejected the feudal principle of ruling with the advice and consent of the barons of the realm.

These attitudes were the root cause of the conflict between Frederick and the baronial faction in the Kingdom of Jerusalem. The Emperor’s absolutist view of monarchy clashed with the barons’ insistence on constitutional government based on the laws and customs of the kingdom. Frederick viewed himself as Emperor and King by the Grace of God. He recognized no fetters on his rights to rule ― neither laws nor institutions nor counsels.

The Kingdom of Jerusalem, on the other hand, was a feudal state par excellance, frequently held up by scholars as the "ideal" feudal kingdom. (See for example John La Monte's work Feudal Monarchy in the Latin Kingdom of Jerusalem, 1100 to 1291, or John Riley Smith's The Feudal Nobility and the Kingdom of Jerusalem, 1174 - 1277.) The nobility of Outrmer in the age of Frederick II had developed highly sophisticated constitutional views, and based on the history of Jerusalem saw kings as no more than the “first among equals.” Furthermore, they upheld the concept that government was a contract between the king and his subjects, requiring the consent of the ruled in the form of the High Court.

Historians have rightly pointed out that, as the struggle between the Hohenstaufen and the barons dragged on, the baronial faction became ever more inventive in finding “laws” and customs that undermined Hohenstaufen rule. This ignores the fact that the Emperor had by then long-since squandered all credibility by repeatedly breaking his word and behaving like a despot. The baronial opposition was indeed desperately trying to keep a proven tyrant from gaining greater control of the kingdom, and they were indeed very creative in finding (or inventing) legal pretexts for achieving that aim. That does not negate the fundamental belief in the rule-of-law as opposed to the rule-by-imperial whim that lay at the core of the baronial opposition to Frederick.

Frederick proved his contempt for the laws and constitution of Jerusalem within the first four years of his reign by the following actions: 1) refusing to recognize that his title to Jerusalem derived through his wife rather than being a divine right; 2) by demanding the surrender of Beirut and nearly a dozen other lordships without due process; and 3) by ignoring the High Court of Jerusalem and its functions ― which included approving treaties.

Of these actions, the second has received the most attention because Frederick’s attempt to desseize the Lord of Beirut without due process was the spark that ignited the civil war. Because the Lord of Beirut was a highly respected, powerful and learned nobleman, the Emperor’s arrogant, arbitrary and unconstitutional attempt to disseize Beirut met with widespread outrage and finally armed opposition.  Beirut was able to rally a majority of the kingdom ― and not just the nobility, but the Genoese, the Templars and the commons of Acre ― to his cause. After each bitter defeat when Frederick tried to find a means of placating the opposition, he refused to budge on the principle of his right to arbitrarily desseize lords without due process.  Like a spoiled brat having a temper tantrum, he kicked, screamed, lied and cheated, but he would not take his case against the Lord of Beirut to court. To the end, he insisted that Beirut abdicate his lordship without due process. To the end, Beirut refused.

Unfortunately, because the clash between Beirut and the Emperor is the focus of a lively, colorful and detailed contemporary account by the jurist and philosopher Philip de Novare, most historians (if they bother to look at the conflict at all) reduce the baronial resistance to a struggle over land and titles. This greatly oversimplifies the concerns of the opposition and overlooks the other two constitutional principles that Frederick II violated blatantly.

The issue of whence he derived his right to rule in Jerusalem actually surfaced first. The very day after his wedding to Queen Yolanda of Jerusalem, Frederick demanded that the lords of Jerusalem do homage to him as king. This was in direct violation of the marriage agreement he had negotiated with his wife’s father, John de Brienne. John took the position that because he had been crowned and anointed, he remained king until his death, but Frederick dismissed this argument because John had only held the crown by right of 1) his wife (the late Marie de Montferrat) and 2) his daughter Yolanda, so long as the latter was a minor. Just three years later, however, at the death of his own wife, Frederick abruptly ― and without a trace of shame or embarrassment ― adopted Brienne’s position. He refused to recognize his son by Yolanda as King of Jerusalem and continued to call himself by that title until the day he died.

Indeed, on his deathbed in December 1250, Frederick II bequeathed Italy, Germany, and Sicily to his son Conrad, his son by Yolanda, but suggested that Conrad give the Kingdom of Jerusalem to his half-brother Henry, the son of his third wife, Isabella of England. This proves that Frederick utterly failed to recognize or accept that the crown of Jerusalem was not his to give away. It had derived from his wife, and could only pass to her heirs ― not to whomsoever he pleased. This attempt to give Jerusalem away to someone with no right to it is like a final insult to the bride he neglected and possibly abused. It also demonstrates that to his last breath he remained either ignorant of or indifferent to the constitution of the Kingdom of Jerusalem.

Since the First Crusade, the Kings of Jerusalem had been elected.  The election of the next monarch was one of the most important prerogatives of the High Court. In short, by trying to dispose over the kingdom without consulting the High Court, Frederick was breaking the constitution. Yet this is hardly a surprise since he had ignored the High Court when trying to desseize Beirut  ― and in signing the truce with al-Kamil.

In the general enthusiasm for Frederick bloodless crusade and the truce that followed it, historians and novelists overlook the fact that the constitution of Jerusalem gave to the High Court the right to make treaties. Just like the Senate in the United States, the executive (in this case the King) might negotiate and sign treaties, but the consent and approval of the High Court was required.  Frederick II Hohenstaufen blissfully ignored this constitutional nicety. He negotiated in secret and presented the barons of Jerusalem with a fait accompli. This, as much as the seriously flawed terms of the treaty, outraged the local nobility. Modern writers like Boulle take the attitude that no one should let something as insignificant as the law of the land get in the way of the “genius,” who could “retake” Jerusalem without any loss of life. Their contempt for the rule of law ought to give us pause, and they also conveniently forget the 40,000 Christians slaughtered in Jerusalem because they had no defenses and no arms in 1244.

Arguably, Frederick’s contempt for the High Court was the single most important factor that doomed his rule in Outremer. He flaunted the High Court by not seeking its advice on who should rule for his infant son. He flaunted it again by not bringing his charges against Beirut before it. He flaunted it by not obtaining the advice and consent of the High Court for his treaty with al-Kamil. He would continue to ignore the High Court to his very death. Yet the High Court was composed not of families or factions, but rather the entire knightly class of Jerusalem. That some men nevertheless sided with the Hohenstaufen had more to do with toadyism than principle since in supporting the Imperial faction they were acting against their constitutional interests purely for personal gain.

Ultimately, it was because he was attacking the collective rights of the ruling class that Frederick failed so miserably in Outremer. As he lay dying, he was engaging in self-deception to think he could bequeath Jerusalem to anyone. He had never controlled it, and he had already lost the loyalty of his subjects just four years into his 25-year-reign ― as they articulated by pelting him with offal. 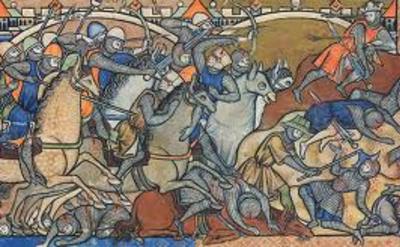 Frederick II and his Barons:

A Clash of Cultures