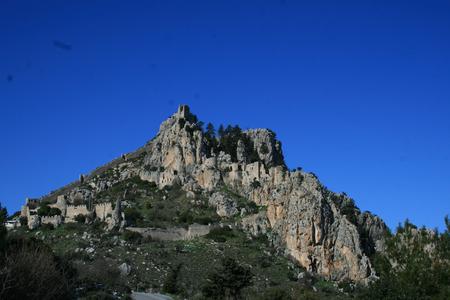 The Conquest of Cyprus I: Chance and Passion

The last and most enduring of the crusader states was established on the island of Cyprus at the end of the 12th century. It endured for over 300 years, long after the Kingdom of Jerusalem had disappeared from the political map, if not memory. How that crusader state came into being is a dramatic story that began with a chance conquest by one of the most charismatic of all crusaders: Richard the Lionheart.

After a tempestuous winter on Sicily, the men of the Third Crusade led by the Kings of England and France were ready to sail for the Holy Land. The kings, however, had quarreled with one another and so departed separately. Philip II departed with his contingent of crusaders by sea on March 30. He arrived off Tyre without incident three weeks later on April 20.

Richard was not so lucky. His fleet of a hundred ships did not set sail until April 10 — and almost immediately encountered a vicious storm. The fleet was scattered as the vessels, some large, some small, some oared and some pure sailing ships, struggled to survive as best they could.  Richard’s galley with a rump of the fleet eventually made safe harbor on the island of Rhodes on April 22, but the ship carrying his betrothed, Princess Berengaria of Navarre, and his sister Joanna, the widowed Queen of Sicily, was missing.

For the next ten days, Richard remained at Rhodes while ships were dispatched to try to round-up the stragglers, and the surviving ships were made seaworthy again.   On May 1, with the ships he had collected, Richard set out in search of his lost vessels and his bride. He made for Cyprus, the largest of the islands in the eastern Mediterranean. His hope was that many of his missing ships, including the one with his bride and sister, might have found refuge there.

And indeed they had! But their reception had been far from welcoming. Far from receiving the charity expected of a Christian monarch (Cyprus was ruled at this time by a self-styled Byzantine “Emperor”), the crews of three ships wrecked on the coast of the island were – in Richard’s own words – “robbed and despoiled.”  The ship carrying the royal ladies had avoided shipwreck, but in a state of distress had taken refuge in the harbor of Limassol.  The knights aboard this vessel somehow received word of what had happened to their comrades, and Joanna of Plantagenet (a woman who deserves a novel of her own!) was clearly not buying the assurances offered by “Emperor” Isaac Comnenus about her safety if she came ashore.  She smelt a rat and stayed aboard her damaged vessel.

Thus when Richard sailed into Limassol harbor on the evening of May 5, he found his bride-to-be and sister in a precarious situation aboard an unseaworthy vessel running out of water, but afraid of being held for ransom or worse if they went ashore.  Richard at once sent an envoy to Isaac Comnenus politely requesting that his men be set free, compensation paid for the property seized (from the wrecks), and permission to come ashore for water and provisions. According to all contemporary accounts, the envoy returned with a very rude reply.

Richard responded as could only be expected of the proud Plantagenet: he attacked.

The exact sequence of events varies according to which chronicle one follows.  One version has Richard order his galleys to break through a blockade of ships at the mouth of Limassol harbor and then storm ashore on foot.  Another version claims he landed on a beach beyond Limassol harbor against opposition, and then took Limassol from landward. Either action (and the later appears the most likely) was extremely risky.

Indeed, an amphibious operation from small ships and boats against a defended shore is one of the most dangerous in warfare. Think of the beaches of Normandy — and Gallipoli. Unlike the Allies on D-Day in WWII, Richard did not have protective fire from big battleships hammering the shore with shells. Instead, Richard had to rely upon covering fire from cross-bow men kneeling or sitting on boats bobbing up and down in the waves—not a good platform for accurate fire with any kind of small arm, let alone a bow and arrow! The enemy, in contrast, would have been firing their bows from solid earth. Furthermore, as Richard and his men approached the shore, he had to jump overboard into the sucking surf -- not in combat boots, but chainmail leggings. He then had to fight his way up the rolling stones of the beach in the face of both enemy fire and attacks. To put it simply, the fact that Richard pulled this off is remarkable and unquestionably heroic.

He was helped, however, by the fact that his opponent was highly unpopular with his own subjects and relying primarily upon mercenaries.

Cyprus, an integral part of the early Byzantine Empire, had become a target for expanding Islam in the mid-7th century. Although it was not continuously occupied, it was partially conquered, frequently raided, and forced to pay tribute to various Muslim overlords until 965, when Constantinople re-established control of the island. The three hundred years of turmoil had made it poor, and it remained a Byzantine back-water until the establishment of the crusader states following the First Crusade. Thereafter, Cyprus began to benefit from the flood of Western pilgrims heading to the Holy Land and prospered from trade with the booming cities of the Levant. In 1126, the Venetians obtained trading concessions on the island and contributed to its commercial revival. After the death of Manuel I Comnenus, however, Constantinople drifted into chaos as first his son was murdered and then his son’s murderer was torn to pieces by a mob. Constantinople was too pre-occupied with this succession crisis to pay any attention to Cyprus, and into the vacuum stepped Isaac Comnenus.

Isaac, a member of the Imperial family (a great-nephew of Emperor Manuel I), who had previously been governor of Byzantine Cilicia, arrived on Cyprus in 1182 or 1183, claiming to have been appointed governor.  Some sources claim his letters of appointment were forged, but it is also possible he was indeed legitimately appointed by Manuel I’s son Alexus II or the latter’s mother and regent, Maria of Antioch. In any case, when Alexis II and Maria of Antioch were murdered and Andronicus Comnenus became Emperor in Constantinople, Isaac rebelled against Andronicus. He thereafter claimed Cyprus as his personal domain. Andronicus didn’t take this sitting down. He prepared a fleet to reclaim the island for Cyprus. Isaac counted with an alliance with Sicily, which sent a fleet. In a naval engagement, the Sicilians fighting for Isaac defeated the Byzantine fleet. By the time Richard of England arrived in 1191, Isaac had been in effective control of Cyprus for roughly 8 years. In that short space of time, however, he had so ruthlessly exploited and terrorized his subjects that they did not want to fight — much less die — for him. Lack of morale on the part of Isaac’s forces enabled Richard to successful land his forces.

While Richard took first the beach and then the city of Limasol, Isaac Comnenus withdrew with his still largely intact army. This situation was too precarious, and Richard knew he had to eliminate this latent threat. So he off-loaded some of his warhorses, exercised them through the night so they could get back their land-legs, and then attacked Isaac Comnenus’ army at dawn the next day. The location is sometimes identified as Kolossi, the later site of a lovely Hospitaller commandery.

Where ever it was, Richard’s early morning attack allegedly caused panic among the self-styled Emperor’s forces. Isaac Comnenus took flight again, and Richard’s men overran the enemy camp capturing huge quantities of booty without casualties.  As at the earlier engagement, the self-styled “Emperor” had little support among the population or his mercenaries.

Richard returned to Limassol and on May 12, Lent now being over, he married Berengaria and had her crowned Queen of England. The exact location is unknown, and several churches in Limassol claim the honor.

At this point, Richard was still in a hurry to get to the Kingdom of Jerusalem. The crusader was in desperate straits, having been reduced to the city of Tyre after the defeat at Hattin.  Richard had taken the cross three and a half years earlier, and all sources attest to his burning and sincere desire to recapture Jerusalem from the Saracens. That it had taken him so long to get this far was more to a function of prudent preparation and bitter politics in Europe than to lack of ardor. The urgency, however, was increased by the fact that his hated rival Philip of France had already joined the Christian siege of Muslim-held Acre with his large contingent of troops.  Richard had every reason to expect these massive reinforcements of the Christian army would tip the scales and lead to the capture of Acre; Richard had no desire to see Philip take all the glory for victory.

As a result, Richard accepted Isaac Comnenus’ surrender on comparatively mild terms. Richard made no claim to Cyprus at this point. He simply demanded reparations from Isaac’s treasury (a welcome infusion of cash to Richard’s war chest so he could finance his crusade for Jerusalem) and, significantly, 100 knights, 500 light cavalry, and 500-foot soldiers for the crusade as well. Isaac was to accompany him on the crusade, surrender his only child as a hostage of his goodwill, and place his castles under the control of Richard’s lieutenants. (The picture at the top of the page is one of these castles, St. Hilarion.)

The terms were undoubtedly humiliating for a self-styled “emperor,” but they were a far cry from “unconditional surrender.” Nor did they constitute the conquest or confiscation of the island.  Instead, they were clearly intended to bolster Richard’s ability to re-capture Jerusalem. Richard had not lost sight of his primary goal and had Isaac complied with the terms of the agreement the last crusader kingdom might never have come into being.

But Isaac Comnenus reneged.  In the night he fled inland. On the sharp and narrow ridge that ran roughly east-west like a backbone through the island stood three impregnable castles. These offered refuge and defiance. Isaac was clearly not about to become a crusader and was banking instead upon Richard being in too much of a hurry to get to Acre to go after him.  Richard had to choose between letting him get away with this treachery and continuing to the siege of Acre, or trying to take control of the entire island by force. Up to now, Richard had responded to unexpected developments, taking advantage of a situation that presented itself to him. What followed was far more calculating. See "The Conquest of Cyprus II"