The Establishment of the Crusader States 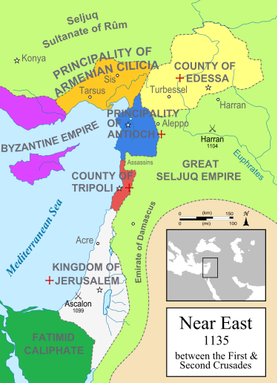 The first crusade re-established Christian rule over some parts of the Holy Land, notably Antioch and Jerusalem, but the Western knights and noblemen who finally made it to Jerusalem felt they had been betrayed by the Byzantine Emperor. Instead of returning the territory they had captured to Byzantine control, the crusaders established a series of independent states with Christian rulers: the Principality of Antioch, the County of Edessa, the County of Tripoli, and – most important – the Kingdom of Jerusalem. (Later, during the Third Crusade, the Latin Kingdom of Cyprus was also established, but that is dealt with in the section on the History of Cyprus.)

Initially, these "kingdoms" were little more than Christian-controlled islands in an Islamic sea, separated from one another by large swaths of territory. Between 1099 and 1144 the Christians steadily increased their area of control -- in most cases giving the defeated Muslim defenders of cities and castles a safe-conduct after surrender. By 1144, the crusaders controlled the entire coastline of the Levant from south of Gaza to roughly Antalya. In short, the crusader kingdoms covered all of what is now Israel, most of modern Jordan, Lebanon, and parts of Syria and Anatolia as well.

Likewise, initially there was only a tiny elite of Latin Christians, dependent economically on the local population composed predominantly of Melkite (both Greek and Arabic speaking), Jacobite, Maronite, and Armenian Christians, with smaller populations of Jews, Samaritans, and Muslims. However, with the establishment of Christian control over the Holy Land a wave of immigration from Western Europe began. By 1180, an estimated 20% of the population was composed of settlers from the West – all speaking a variety of languages - including second and third generation immigrants descended from earlier settlers, who spoke at least a crude Arabic in order to communicate with the local population.

These "crusader states" were distinctly different from the feudal societies from which the founders of these states stemmed. To be sure, leaders of the First Crusade sought to recreate familiar structures and customs, but they had to adapt these to the unusual circumstances in which they found themselves. The result was a hybrid-society composed of diverse elements, many of which were found nowhere else in the medieval world.

In other entries, I will explore many of these unique features such as: 1) the elected kingship and the role of the High Court; 2) the high status, power and independence of women, 3) the multi-cultural, multilingual native population; 4) the "sergeants" and settlers that  made up the backbone of the feudal army 5) the urban economy, 6) a rural economy,  7) the sophisticated administrative apparatus, 8) the complex legal system; and 8) the powerful, educated and independent knights.