It is still common for people today to believe (and tell others) that most noblemen and knights in “the Middle Ages” were illiterate. Even authors of otherwise quite credible historical fiction make this assumption about their knightly and even noble characters. In reality, the noblemen of Outremer were not only literate, many of them were highly sophisticated scholars and jurists.

The court-system in the Kingdom of Jerusalem required both jurors and counsellors at every trial and these men were all drawn from the knightly class. They had to be versed in the law and capable of entering and refuting pleas, of debating, deliberating and rendering judgement based on a legal opinion.  Indeed, every knight in the realm had the right to sit in the High Court and deliberate on existential issues such as the selection of regents, the imposition of taxes and  the acceptance of treaties. They were expected to know the law, and that meant reading about it.

Even more extraordinary, in the mid-13th century, an entire school of legal scholars evolved that wrote no less than seven books on legal issues and six other scholarly works. These men, none of whom were in Holy Orders and all of whom held fiefs, fought with sword and lance on horseback, and commanded troops, also wrote histories, books of poems, philosophical works and legal discourses. Riley-Smith goes so far as to write: “Perhaps the greatest monument to the western settlers in Palestine, finer even than the cathedrals and castles still dominating the landscape, is the law-book of John of Jaffa, which…is one of the great works of thirteenth-century thought.” (The Feudal Nobility and the Kingdom of Jerusalem 1174 – 1277, Jonathan Riley-Smith, Macmillan Press, 1973, p. 230.)

These books were not, however, merely philosophical or scholarly. They were also meant a practical handbooks for the ordinary knight and burgess involved in litigation, for his counsellors and jurors. Thus, in addition to discussing the theories and issues, these books provided practical advice on the procedures for filing cases, how to protect witnesses, how to answer an opponent and test his evidence, the importance of using the right words ― even how to use the law to one’s advantage!

Moving from the abstract to the specific, let me introduce you to some of the most prominent among them:

Arguably the first of the great jurists of Jerusalem was none other than Aimery de Lusignan, the elder brother of the incompetent Guy de Lusignan (who usurped a crown only to lose the kingdom in less than a year). Aimery was a very different man than Guy, notably popular with the same barons who detested his brother. He had been in the Holy Land since about 1175. He was named Constable of the Kingdom by Baldwin IV in 1182. He fought and was taken captive at Hattin. Released in 1188, he joined the siege of Acre in 1189 and fought throughout the Third Crusade. In 1193, he joined his brother on Cyprus, and after Guy’s death he succeeded him as lord. He negotiated with the pope and the Holy Roman Emperor to make Cyprus a Kingdom within the Holy Roman Empire, and in 1196 was granted the title of King of Cyprus. In late 1197, after the death of Henri de Champagne, he was selected by the High Court of Jerusalem as the fourth husband if Isabella of Jerusalem and in January 1198, he was crowned in Acre.

Between 1198 and his death in 1205, King Aimery either wrote (or commissioned the writing) of a book intended to capture all known laws of the Kingdom of Jerusalem, which had been lost when Jerusalem fell to Saladin in 1187. It is questionable whether the laws of Jerusalem had really been neatly written down, sealed and stored in the vaults of the Church of the Holy Sepulcher, but this was what contemporaries claimed. Certainly, when Aimery set out to collect and transcribe the laws of his kingdom, he was working from oral records based on a consensus of what people remembered about the laws and customs of the Kingdom of Jerusalem during its first century of existence. Throughout the twelfth century, those laws had been evolving largely through practical necessity, but from this point onwards there was a clear point of reference: Aimery de Lusignans “Livre au roi” ― the Book of the King.

The “three wisest men this side of the sea”

After Aimery (who is revered more for compiling than analyzing or interpreting the law), came three men who in subsequent generations were revered as exceptionally wise. These were:

Ralph of Tiberias – the Socrates of the Barons. Ralph was a son the Prince of Galilee, a step-son of Raymond of Tripoli. He had fought at Hattin but escaped with Tripoli rather than falling into Saracen captivity. He participated in the siege of Acre, and in 1194 was named Seneschal of the Kingdom of Jerusalem, a position he held for the next thirty years. Like the real Socrates, he passed on his wisdom in oral form to the next generation of jurists rather than writing himself, but by the mid-thirteenth century he was viewed by his successors as “the finest jurist there had ever been in the kingdom.” (Riley-Smith, p. 157.)

John d’Ibelin, Lord of Beirut ― “The Old Lord of Beirut.” John was the eldest son of Balian d’Ibelin. He had been no more than eight years old when the Kingdom had been lost at Hattin, including his home and inheritance at Ibelin. He spent the next five years in considerable uncertainty in Tyre, while his father and the other surviving lords fought to regain the Kingdom. In 1192, his father was granted the small lordship of Caymont, but the Ibelins never seemed to identify with it. John was appointed Constable of Jerusalem in or about 1198 by Aimery de Lusignan, but he traded the office for the newly conquered lordship of Beirut. Here he built a magnificent palace much admired by visitors. While Beirut was his principle base of power in his struggle against the autocracy of Friedrich II, he also held extensive fiefs (unnamed) on Cyprus, also from Aimery de Lusignan. John of Beirut was the leader of the baronial revolt against the Holy Roman Emperor and his lieutenants, which was based strictly (at least initially) on a point of law, i.e that the King of Jerusalem did not have the right to “lay hand on vassal or his property without a judgement of the High Court.” According to Riley-Smith, John of Beirut enjoyed such prestige in later years that his opinions effectively decided cases. (Riley-Smith, p. 123).

Balian of Sidon. Balian was the son of Reginald (also Reynald/Renaud) of Sidon, an important baron in the later half of the twelfth century, and his wife Helvis d’Ibelin, Balian d’Ibelin’s eldest daughter. Reginald had escaped Hattin and for a period defied Saladin at his castle Belfort, but he was eventually forced to surrender Belfort after being seized and tortured by Saladin. Allegedly, as an act of remorse, Saladin restored a portion of his barony to him, and King Aimery restored the rest after it had been recaptured in 1197, which is interesting as Sidon had been a staunch opponent of Guy de Lusignan.

The Writers of Legal Wisdom

Philip of Novara. His origins are obscure and he is used as an example of how a man could make a fortune through legal scholarship and practice. Eventually he held a fief on Cyprus from the Ibelins, but his fame rests on his literary works. He wrote a history of the war between the barons and Friedrich the II, poetry, philosophy and a legal tract on “how to plea.”

John of Jaffa: The Plato of the Barons. John was the son of Philip d’Ibelin, Balian d’Ibelin’s second son, who had been regent of Cyprus 1218 – 1227. He fought with his uncle against the Emperor, and was severely wounded at the Battle of Casal Imbert. In 1241 he acquired the old Ibelin fief of Ramla, and in 1247 was granted the County of Jaffa and Ascalon. He spent much of the rest of his life trying to defend that exposed fief on the borderland. He took part in Louis IX’s crusade against Egypt. And he is the man described by Jean de Joinville in his account of the crusade as follows: “He arrived most nobly of all, for his galley came painted below the waterline and above with escutcheons of his arms ― or a cross paté gules. He had at least 300 oarsmen in his galley….As he approached it seemed as though his galley flew as the oarsmen drove it forward….” (Joinville, Life of St. Louis, Chapt. 4) I think we can safely say he was not particularly humble, but maybe he had no need to be. He is also the author of the book sited above as the most impressive legacy of the Kingdom of Jerusalem!

Geoffrey le Tor. Like Philip, a man of knightly rather than baronial estate, his family held property in and near Acre in the twelfth century, and he later received a fief on Cyprus from King Henry I. He was also chamberlain in the Kingdom of Cyprus, and twice served as ambassador to the Holy See. He is credited with writing one of the seven surviving books on legal practices.

Lest you think this a paltry number of men to make my claim that most of the knightly class were well-educated and highly literate, the above are the leaders, but the following men are also recorded as being notable and respected jurists among an even wider class of jurors and counsellors including men of bourgeois origins: Renier and Arneis of Gibelet, Rostain Aimer, Reynald Forson, Paul of Nablus, Philip Lebel, William Raymond, Philip of Baisdoin, Raymond of Conches, Raymond and Nicholas of Antiaumes, and James Vidal.  Riley-Smith argues that “the practice of law was a route to fame and status in the Latin East.” (Riley-Smith, p. 124).

I hope I have laid to rest any remaining doubts about whether the barons and knights of Jerusalem were illiterate and uneducated brutes….

John d'Ibelin and Philip de Novare are both prominent figures in my novel Rebels against Tyranny.

Baronial and Knightly Scholars in the Crusader Kingdoms 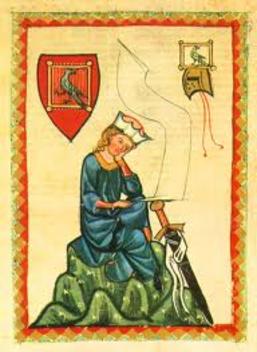