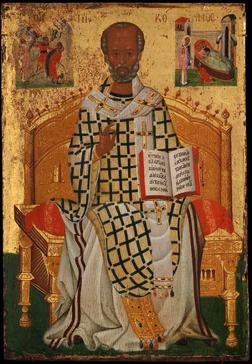 Serfs, Peasants, and Bureaucrats under the Lusignans

Cyprus was significantly different in character from the crusader states founded on the mainland of the Levant. One key difference lay in the demography. Whereas the crusader states in Syria/Palestine were inhabited by a patchwork of minorities adhering to a variety of different faiths, the Kingdom of Cyprus at the time of the crusader conquest was a homogeneous state inhabited almost completely by Greeks. Rather than a polyglot country where Arabic, Syriac, Greek, and Armenian were all spoken by large minorities, Greek was the only language of significance on Cyprus.  Likewise, in place of Christians adhering to diverse Christian rites living alongside large populations of Jews, Samaritans and Muslims, the population of Cyprus was overwhelmingly Greek Orthodox. This posed different challenges for the Frankish elite.

Richard I of England conquered Cyprus from the Byzantine despot and self-proclaimed "Emperor" Isaac Comnenus.  Byzantine and local Cypriot sources attest to Isaac's harsh, arbitrary and rapacious regime. Isaac's policies had particularly targeted the aristocracy on the island; he "confiscated their property, and abolished privileges they had been granted by Manuel I Comnenos."[1] The resulting alienation of the Cypriot aristocracy caused many aristocratic families to either emigrate or cooperate with Richard the Lionheart. Richard secured much support from the Cypriot elite by promising a restoration of the laws and customs they had enjoyed under Manuel I in exchange for 50% of the revenues of the island.

Unfortunately for the Cypriots, Richard had no interest in retaining control of the island and sold it to the Knights Templar. Either he "forgot" to tell them about the deal he had cut with the Cypriot aristocracy, or the Templars did not feel bound by it. Within a very short period of time, the population was in rebellion -- led by members of the remaining elites. Although the Templars soon recognized that they did not have the capacity to pacify the island, historians believe that the unrest contributed to more emigration on the part of the aristocratic families, something continued during the early years of Lusignan rule, a period which may well have been characterized by continued unrest and violence.

Yet, sometime before the turn of the 12th/13th century, the Lusignans (probably the savvy Aimery rather than the ever-incompetent Guy) recognized the need to co-opt the native population to their regime. While the tale about Guy asking Saladin for advice belongs in the realm of fantasy, there can be no question that the Lusignans gave away fiefs in order to create a feudal structure on the island. According to one version of the Continuation of William of Tyre, fiefs were given to both native Greeks on the island and to Latin knights. Other sources, however, highlight that Greeks were neither vassals of the king nor represented in the High Court. The best explanation of the apparent contradiction is that while Greek lords who were prepared to swear allegiance to the Lusignans were allowed to retain their land-holdings (i.e. their wealth), they were not expected to perform military service for those hands and so did not belong to the feudal elite. Meanwhile, however, the majority of the Greek aristocratic families appear to have returned to the Metropolis, Constantinople, leaving behind a population of predominantly peasants.

The peasants of Cyprus were divided into two categories in accordance with Byzantine practice. There were paroikoi, unfree peasants tied to the land similar to serfs in Western Europe, and francomati, free tenant farmers. The status of these lower classes was not substantially altered under Lusignan rule. Instead, the Lusignans strove for continuity. To this end, the new Frankish landowners, for the most part, employed Greek stewards on their estates and also drew on the services of Greek "jurats," who represented the interests of the communities, analogous to the "rais" that represented the Muslim peasants in the Kingdom of Jerusalem.

Furthermore, the Greek population enjoyed a high degree of judicial autonomy. Family law, for example, was from the start completely under the jurisdiction of the Greek Orthodox church, and with time the Greek ecclesiastical courts became a "kind of arbitration tribunal for every kind of litigation between Greeks."[2] Despite the stratification of society described in detail in the Assizes and the legal treatises of the 13th-century legal scholars such as Philip de Novare and John d'Ibelin of Jaffa, the royal bans -- that reflect everyday reality more than legal treatises do -- often treat Franks and Greeks equally.[3] Last but not least, there is no evidence that taxes or duties were increased under the Lusignans.

Between these extremes (the aristocrats who for the most part chose to leave, and the peasants who had no choice but to remain and adapt) was a small middle-class of merchants and above all educated elites who had administered the island for Constantinople ever since the Arabs had been expelled in the tenth century. These bureaucrats were often members of the Orthodox clergy and sometimes belonged to ecclesiastical families (Greek priests could marry and so a career in the church was often a family tradition) with generations of government service. Others were well-educated secular professionals: lawyers and financial experts.

Such men were invaluable to the Lusignans -- who had the sense not only to employ them but to retain the very institutions that the Byzantines had used to administer the island: the sekreton (σεκρετον) and the kommerkion (κομμεπρκιον). The former was transformed in Latin to the "secrete" and the later "comerc." The Secrete was the government department that kept records of land ownership and taxes and evolved into the central financial office of the Lusignan government responsible for revenue collection and government expenditure. The Comerc was the royal department responsible for duties on imports and exports and market duties for the sale of merchandise.

Nor was this reliance on Greek bureaucrats a temporary measure. Far from disappearing as the years passed, the Greek administrative class evolved into a new Greek "aristocracy of the pen." By the fifteenth century, some members of this wealthy Greek elite had been accepted into the Frankish nobility as well, although the rank of vassal required conversion to Latin Christianity.

As in Latin Syria, however, the native -- in this case Greek -- elites contributed to the defense of the realm by providing the vitally important horse archers of the Cypriot army, the misleadingly named "Turcopoles." Turcopoles evolved from Byzantine traditions and made up an estimated 50% of the cavalry of the army of Jerusalem. Although the evidence in Cyprus is more scanty, records of Turcopoles with clearly Greek names exist.

Culturally and socially, the Greeks remained dominant. Significantly, although a Latin church hierarchy was established on the island, the Orthodox church retained its own hierarchy and clergy. The Latin church siphoned off income in the form of land and tithes from the Latin landlords, but the Greek church retained enough wealthy patrons to prosper throughout the Lusignan period as well. There was only one incident of persecution of Orthodox clergy in the entire Lusignan era -- and that was during a civil war in which the ruling king was a minor and probably not in control of the island at the time.

There was, furthermore, no segregation based on religion or ethnicity; Greeks and Latins lived side-by-side. Indeed, despite attempts by the pope to prevent inter-marriage celebrated according to the Greek rites, by the 14th century such marriages were so common that the Latin Archbishop of Nicosia could only attempt to impose some restrictions over them.

Likewise, although Latin remained the language of the High Court, Greek was the language of the streets and much of the diplomatic correspondence as well. While the Greeks learned French and Latin to advance their careers in the Lusignan bureaucracy, the Franks learned Greek in order to conduct business on their estates, engage in trade and commerce, and participate in the cultural activities around them. In the course of time, a unique Cypriot dialect, which borrowed many words from French, evolved and became the language of the island.

The overall fairness of Lusignan rule was reflected in the contentment of a population that did not once rise up in rebellion after the Lusignans were established. This was not due to "passivity" on the part of an oppressed population. After all, there had been two uprisings in the year between the departure of Richard I and the arrival of the Lusignans.  An even more telling comparison, however, is with Crete. Here there were seven major rebellions against Latin (Venetian) rule in the 13th-century, and another three in the 14th-century, while unrest continued into the 16th century. In contrast to the Venetians, however, Lusignan rule was not designed to exploit a colony for the benefit of the distant power. The Lusignans lived on Cyprus among their people and identified with them. In retrospect, the period of Lusignan rule would be looked back on as the "golden age" of Cypriot independence and prosperity.