It has become commonplace (not to say popular) to describe the Islamic states that governed the territories that later became the crusader kingdoms as “civilized” and the crusaders as “barbarians.”

While sack of Jerusalem was unquestionably a barbaric act – from the modern perspective. It was hardly so in the eyes of contemporaries. The contemporary rules of war were very explicit: a city that surrendered could expect mercy, a city that did not could expect “to be put to the sword.” This had been the rule of war since the sack of Troy.

Furthermore, the allegedly more "civilized" Muslims, had taken the Holy Land by the sword, not with sweet words and persuasion. In 997 the Muslims sacked Santiago de Compostella, the most important pilgrimage church in the West. In 1009 the Church of the Holy Sepulcher, built by the Byzantines over three hundred years starting in the reign of Constantine the Great (306 – 337), was utterly destroyed. Meanwhile, however, the Muslims had divided into Shiites and Sunnis and engaged in bloody wars in which they murdered, raped, pillaged and burned rival Muslim cities. Zengi, atabeg of Mosul, for example, not only (according to a Muslim source) ordered the “pillaging, slaying, capturing, ravishing and looting” of Edessa, but was feared in Damascus because of “his exceptionally cruel and treacherous behavior” – to his co-religionists.

Attempts to depict the crusaders as illiterate brutes lacking in cultural accomplishments also miss the mark. The “unwashed masses” might not have been very cultivated – but nor were the peasants and common soldiers of the Byzantine Empire, or the Turks, the Arabs and Bedouins etc..  The upper classes in 11th century Europe, on the other hand, had already started to develop arts and architecture to a high degree of sophistication as manuscripts, artifacts and the architectural record shows. Literacy was confined to an elite, and fostered mostly by the clergy – but that was true in the Byzantine and Muslim world as well.  Nevertheless, it is fair to say that in certain fields, notably medicine, mathematics and astronomy the Muslim world was far ahead of Western Europe.  The differences are hardly so dramatic, however, as to paint the one culture as civilized and the other as “barbaric.”

What then made the crusaders appear so “barbaric” to their contemporaries in the East? Two features of Western European feudal society set it apart from the East into which the crusaders came so suddenly and unexpectedly at the end of the 11th century.

First was the decentralized system of government based on complex, feudal relationships. Both the Byzantine and the Muslim world in this period were intensely hierarchical societies in which the Emperor (in the one) and the Caliph (in the other) had supreme and absolute control over his subjects – at least in theory. True, reality looked different.  By the end of the tenth century the Abbasid Caliphs were virtual prisoners of the Persian Abuyid dynasty, and changed masters when the Seljuk Turks captured Bagdahd in 1040.  Thereafter they were puppets of the Selkjuk sultans, while the Fatimid Caliphs were at the mercy of their viziers.

But whether the theoretically absolute rulers wielded actual power or not, their powerful “protectors” always ruled in their name; they considered – and called themselves – slaves of their masters. Western feudalism, in which kings were little more than the “first among equals,” was utterly alien to the Eastern mentality, and so was the outspokenness and (from the Easter perspective) impudence of vassals. The Eastern elites saw the inherent dangers of such a fluid system and associated it with primitive tribal structures. Yet it was exactly these feudal kingdoms that gradually devolved power to ever wider segments of the population until (through a series of constitutional crises) they eventually developed into modern democracies. Meanwhile, the Eastern states remained mired in autocracy.

The other feature of Western European society that the Muslims (though not the Byzantines) found disgusting and incomprehensible was the presence of women in public life. The fact that women had names and faces that were known outside the family circle was viewed as immoral and dishonorable (much the way the Athenians viewed Spartan women) by the Muslims of the 12th and 13th centuries. The fact that women not only had names and faces, but a voice in affairs and could play a role in public life including controlling wealth and influencing politics was even more offensive. Yet modern development research shows a strong correlation between societies that empower and enfranchise women and development, while societies that insist on muzzling and oppressing half their population are nowadays considered less “civilized.”

Whether you view the crusaders or the Saracens as more civilized will therefore depend less on objective factors than on how you view democracy and womens’ rights. 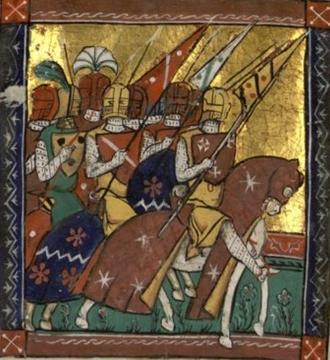