First Among Equals: The Kings and the High Court 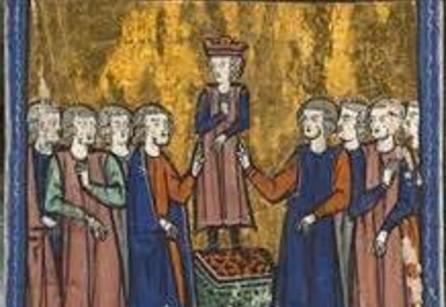 Perhaps the most remarkable thing about the Kings of Jerusalem in the first 125 years of the history of the kingdom is that they were elected rather than born. The law of primogeniture did not automatically apply, but rather the High Court of Jerusalem, composed of all the vassals of the king, formally elected the monarch. This was not just a formality, at least not in the first century of the Kingdom. The High Court could impose conditions on candidates, and force its candidates for a consort upon female heirs. Without its consent, a king or queen, even if crowned and anointed, was just a usurper.

The tradition started, of course, with the conquest of Jerusalem in 1099. The First Crusade had never had a single leader and there was considerable (often destructive) rivalry between the leading lords that took the cross. By the time the crusaders reached Jerusalem, Stephan had abandoned the crusade altogether, Baldwin of Bouillon had struck off on his own and captured Edessa, and Bohemond had remained in Antioch to re-establish a Christian state there.  The remaining lords, however, chose Godfrey of Bouillon to rule over Jerusalem.  Godfrey reputedly refused to wear “a crown of gold where Christ had worn a crown of thorns” and took the title of “Defender” or “Protector” or possibly just “Ruler” of Jerusalem.

Just one year later, however, he was dead without an heir. The nascent kingdom was in a more precarious state than ever, since the majority of the surviving crusaders felt they had fulfilled their vow and returned home. Those noblemen remaining in the Holy Land again (not without controversy) selected a successor from among themselves, in this case, Godfrey’s brother Baldwin.  Very significantly, he was not the heir entitled by the rules of primogeniture, as he had an elder brother in the West, Eustace. Baldwin did not share his brother’s qualms about calling himself king, and took the title of King Baldwin I. But in 1118 Baldwin I also died without an heir of his body, and the barons of the crusader kingdoms chose for a third time a leader from among their ranks, this time, Baldwin of Bourcq, who thereby became Baldwin II of Jerusalem.

Three such “elections” (with admittedly limited franchise!) set a legal precedent and the Kings of Jerusalem were henceforth always “elected” by the High Court of Jerusalem. The later was initially composed of the leading lords of the realm (which made the election process the equivalent of the English House of Lords electing the Kings of England.) By the mid-12th century, however, the High Court had been expanded to include the “rear-vassals,” that is men who held a fief from another lord. Thus, in addition to the tenants-in-chief of the king (the barons), the tenents of barons, and their tenents also had a seat on the High Court. And here each man had (at least in theory) an equal voice. As Professor Riley-Smith puts it in his seminal work The Feudal Nobility and the Kingdom of Jerusalem, (Macmillan, 1973), “the voice of the lowliest knight could be raised in the highest court in the land.”

The High Court of Jerusalem had many functions, judicial, legislative and executive. John La Monte writes in Feudal Monarchy in the Latin Kingdom of Jerusalem (Medieval Academy of America, 1932): “Its word was law…and the king who endeavored to act without the advice of, or contrary to the decision of, his High Court found himself confronted with a legalized rebellion on the part of his subjects.” In Jerusalem, the elected king remained “first among equals” vis-à-vis his barons and bishops rather than a sovereign

Which does not mean that the election of kings was an open, democratic affair. As the products of European feudalism with strong ties to the ruling houses of England and France, the members of the High Court favored the blood relatives of the last monarch. Most disputes were between which of several close relatives had the better claim to the throne. These were legal issues (mixed, of course, with practical considerations, personalities and politics.) Nevertheless, the fact remained that the approval of the High Court was a pre-requisite for legitimate rule, and thus every time a king died there was effectively an interregnum (if not outright crisis) while factions positioned themselves and consensus was established.

It also meant that the High Court had the ability to impose condition on candidates even where there was consensus on who that candidate was. An important example of this is the accession of Amalric after the death of Baldwin III. Amalric was Baldwin’s younger brother. He was a mature man with an overall positive reputation and a track record of fighting effectively (a critical criteria in the ever-beleaguered Kingdom of Jerusalem). However, for whatever reason (and these are highly controversial) the High Court did not like his wife, Agnes de Courtney, and made Amalric set her aside before it would give its approval to his coronation.

Amalric’s daughter Sibylla on the other hand was not willing to set-aside her husband, and resorted to a coup d’etat in which she was crowned without the consent of the High Court and on top of that crowned her husband king with her own hand because the Patriarch would not do it. This led to a constitutional crisis, with the majority of the barons and bishops prepared to crown a (legitimate) rival king and queen: Amalric’s younger daughter, Isabella, and her husband Humphrey de Toron. Although Humphrey proved spineless and snuck out in the dark of night to do homage to Sibylla robbing the barons of their rival king, it did not make Sibylla and Guy’s coronation any more legal. The Baron of Ramla and Mirabel was so outraged he preferred to renounce his entire estate and leave the realm. The Count of Tripoli made a separate peace with Saladin. But the bulk of the barons and bishops caved-in and did homage to Sibylla and Guy.

With the loss of the kingdom in the aftermath of Hattin, the High Court temporarily vanished as well, but its spirit lived on in the actions of the leading barons and bishops. These staunchly refused to recognize Guy de Lusignan’s right to the throne after the death of Sibylla, through whom he had derived his crown, and they effectively forced Isabella to set-aside the man who had betrayed them earlier and marry a man they believed better suited to rule. When Richard asked for a judgement on who should be king, his own candidate Guy de Lusignan, or Isabella’s (new) husband Conrad de Montferrat, the fighting men of Jerusalem (i.e. the same men who would have made up the High Court had the Kingdom still be operational) voted, allegedly unanimously, for Conrad the Montferrat ― and Richard the Lionheart backed-down, conceded defeat, and recognized Montferrat.

When Montferrat was assassinated a few days later, it was again the barons and bishops of Jerusalem, the de-facto High Court, that selected her next husband, Henri de Champagne. When he died five years later, the High Court had been re-constituted, and quite officially selected Isabella’s last husband, Aimery de Lusignan.

Thereafter, the High Court selected the husband for the next two queens, which is the same thing as saying they selected the next three kings. Unfortunately, in the second instance they chose Friedrich II Hohenstaufen, the Holy Roman Emperor, and he had neither understanding nor respect for an institution like the High Court, and tried to impose his brand of absolutism on Jerusalem. But that is material for a separate entry, and so I will close here.