With the wisdom of hindsight, the crusader states in the 13th century are almost universally portrayed as fragile, vulnerable and tottering on collapse. Yet as historian Stephen Donachie has argued persuasively in a variety of fora, this is a gross exaggeration that reduces nearly a century of history to a single snapshot taken at the end of that hundred years. Roughly the first half of that century, from the arrival of the Third Crusade until the catastrophic defeat of the Frankish army at La Forbie in 1244, was actually a period of comparative prosperity, peace, security and even expansion. Below is a synopsis of the key events and factors influencing the situation in the crusader states between 1190 and 1244.

Between 1187 and 1190, the forces of Salah ad-Din overran the former Kingdom of Jerusalem, destroying or occupying all the major cities including Jerusalem, Bethlehem, Hebron, Nazareth, and Nablus, as well as the coastal ports of Jaffa, Ascalon, Caesarea, Acre, Sidon, Beirut, and Gibelet. As 1190 closed, the sole city of the former kingdom still in Christian control was Tyre. Although the County of Tripoli and the Principality of Antioch remained independent, both were vulnerable and threatened.

In the course of the Third Crusade, the Franks regained control of the critical port of Acre and then extended that control down the coast as far as Jaffa. While this coastal strip lacked sufficient territory to be self-sufficient in grain and other vital food-stuffs, the Third Crusade had brought the island of Cyprus under Frankish rule. Cyprus was comparative sparsely populated and very fertile, thereby replacing the lost inland territories as the bread-basket of the Frankish states on the mainland. Thus, by the end of the Crusade in 1192, the situation of the crusader states had improved markedly over the situation between 1187 and 1190. Furthermore, the negotiations that ended the crusade secured a three-year truce.

In 1193, Saladin died. This set off a succession struggle among his many heirs that lasted fully seven years. While the Ayyubids were fighting among themselves, the Franks had not only a respite from attack, they were able to themselves go on the offensive.

In 1197, a force of German crusaders came to the Holy Land in advance of a promised crusade by the Holy Roman Emperor Henry VI. The Emperor died in the West, but the German crusaders took the offensive anyway.  Although in the meantime, Jaffa had been lost again to the Saracens, the Germans undertook a campaign north from Tyre. They captured Sidon, Beirut, Gibelet, and Botron, thereby eliminating the Muslim-controlled enclaves that had separated the Kingdom of Jerusalem from the County of Tripoli. For the next roughly seventy years, the Franks retained control of the coastline of the Levant from Arsur in the south to Tortosa in the north.

In 1204 forces initially raised for a campaign to regain Jerusalem were diverted by Venice and, after a complicated series of events, took control of Constantinople. A Latin “Empire” was established that occupied roughly the same territory as modern Greece minus the western half of northern Greece but straddling the Bosporus and extending to the shoreline on the Asian side of the Aegean. It was flanked by territory still held by Greek Orthodox forces in western Greece and what is now eastern Anatolia. While highly controversial to this day, in the short-term the establishment of the Latin Empire of Constantinople gave the Franks near complete mastery of the Eastern Mediterranean. A surge in new mercantile activity on the part of the Italian city-states followed.

Meanwhile, Christian Armenia was also gaining in strength. The Armenian leaders agreed to a (more nominal than substantive) reconciliation with the Church in Rome, and thereby facilitated closer ties with the crusader states. Inter-marriage with the Princes of Antioch led to dynastic conflict, but Christian-controlled territory extended from Antioch along the southern coast of what is now Turkey all the way roughly Alanya.

With the death in 1218 of Saladin’s brother, who had finally defeated his rivals in 1200 and managed to retain most of his brother’s empire, the Ayyubid Empire again entered a period of internal bickering. Al-Mu’azzan, the Sultan in Damascus, was soon at war with his brother Al-Kamil, who ruled in Egypt. Al-Kamil covertly sought the support of the Holy Roman Emperor, offering to restore Jerusalem (which he did not control) to Christian control, if the Christians would help him defeat his brother.

This may have been a major factor in convincing Emperor Frederick II that he could launch a successful crusade. Although al-Mu’azzan inconveniently died, making Christian aid less vital to al-Kamil, Frederich II still managed to capitalize on the divisions within the Ayyubid camp. In 1229, his troops reoccupied Jaffa and by means of negotiation obtained limited Christian control  of Jerusalem, Bethlehem, Nazareth, and Toron. These gains were extended by a crusade (not numbered by later historians but very real nevertheless!) led by the Thibald Count of Champagne and Richard Earl of Cornwall between 1239 and 1241. They extended Frankish control inland from Jaffa, regaining Tiberias and the Sea of Galilee along with the upper Jordan valley.

Thus in 50 years, the Frankish territories had expanded from the City of Tyre to a territory roughly equivalent to modern Lebanon and pre-1967 Israel minus everything south of the Dead Sea. As modern Israel and Lebanon demonstrate, this territory is fertile and not inherently unsustainable or indefensible.

This is the "Outremer" in which my series on the civil war in the Crusader States is set. The series begins with: Rebels against Tyranny 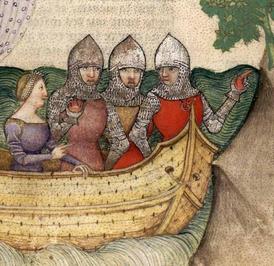 Resurgence and Expansion of the Crusader States