Balian has survived the devastating defeat of the Frankish army at the Battle of Hattin, and walked away a free man after the surrender of Jerusalem, but he is baron of nothing in a kingdom that no longer exists. Haunted by the tens of thousands of Christians now in Saracen slavery, he is determined to regain what has been lost. The arrival of a vast crusading army under the soon-to-be-legendary Richard the Lionheart offers hope -- but also conflict, as natives and crusaders clash and French and English quarrel. 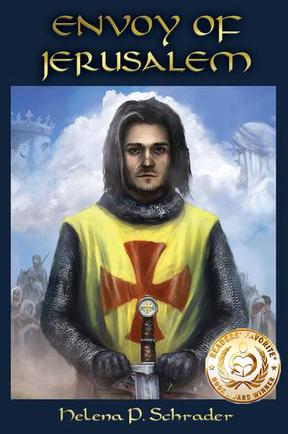 "...this is one of the best historical series ever written. ... A very detailed drama full of historical truths intertwined with a fantastically written tale, ... The zest this author has for her subject is dramatic, intense and something that will never be forgotten!" -- FEATHERED QUILL

"...I was extremely impressed by Schrader's unparalleled skill in capturing a very complex period in history in a manner that is utterly accessible and even addictive. Little-known characters are brought to the reader's attention, and well-known characters are presented in a new light ... I found the book extremely difficult to put down, and was glad that it stretched to 500 pages....I simply cannot find fault with "Envoy of Jerusalem" and I warmly recommend it to any fans of historical fiction. It is an exemplary book of its kind." ONLINE BOOK CLUB

"... a captivating work of historical fiction...that offers insight into the religious politics of the Middle Ages. ...Even the most minor character is fully described and the attention to the smallest details is evident in every aspect of the novel. ...Passionate prose brings the fascinating backdrop of the Middle Ages to life, and interest holds throughout." -- FOREWORD CLARION REVIEW

'Envoy' stands alone as captivating and entertaining, as well as scholarly and far-reaching in scope and intent. As a complete work, the 'Jerusalem' trilogy represents an outstanding achievement; a literary oeuvre constructed in keeping with the highest academic principles for research and verifiable accuracy. -- REAL CRUSADES HISTORY

"Schrader, a career diplomat with a PhD in history, delivers a meticulous historical drama full of telling details and dialogue that's contemporary-feeling without compromising its historical authenticity.... [T]he story presents both Christian and Muslim points-of-view, so there is no facile stereotyping of villains....[R]eaders are sure to find the author's enthusiasm for Crusade-era history infectious." -- BLUE INK

"Helena has always been masterful in incorporating both the realistic geographical and historical setting of the time into her story with splendid accuracy and more importantly without interrupting the artistic flow of the tale. This is an incredibly monumental task which she has accomplished in the first two books, the Knight of Jerusalem and the Defender of Jerusalem. But here she has unbelievably taken it a notch higher. What I mean by this is: The period covered by the first two books that is 1175 to 1187 ending at the terrible Battle of Hattin is not as well researched and documented as the immediate aftermath that is 1187 to 1193...Thus, it becomes more difficult for an author to weave a tale if they are to incorporate all existing historical accounts while still maintaining some semblance of literary license to make for a credible and accurate tale. This is what Helena has done here. It is nothing short of impossible. She has managed to invent and discover the underlying motives, causes and events that could logically explain the sequence of history. I bought the book 2 days ago and have already finished reading it thrice. I can say without any doubt, Bernard Cornwell has a peer totally his equal." -- An Amazon Reviewer

"This book is a combination of non-stop action interspersed with the very human element that is often overlooked in historical fiction. I especially appreciated the fact that the s author included the stories of the slaves before and after redemption. I was basically familiar with the historical figures portrayed, but had never really considered the lives of the 'regular folks' like you and me. I also appreciated the heroic actions of men and women who sacrificed their own wealth and security for others. There was a time many years ago when I was at University when we were encouraged debunk heroes. I say enough! It is time we hold up heroic deeds and words. This world and it's people need inspiration, and I personally found this series and this book in particular inspiring." An Amazon Reviewer