On July 14, 1229, an army led by the Lord of Beirut routed the mercenaries and feudal levees of the five Imperial Baillies of Cyprus. The battle brought to a dramatic end the misrule of Emperor Frederick II's minions. Yet all five Baillies not only survived the battle but fled to safety. Most significantly, three of the Baillies took refuge in the impregnable fortress St. Hilarion -- and they had the young King of Cyprus, Henry, with them. While the Imperial Baillies held out in the hope of Imperial relief, the Lord of Beirut was forced to lay siege to a castle containing his king -- prima facie an act of treason.

In addition, one of the Emperor's Baillies, William de Rivet, sought refuge in the port castle at Kyrenia but surrendered the castle and left Cyprus when no Imperial aid arrived within a specified date. Another of the Baillies, Sir Gauvain de Cheneche, managed to reach the castle of Kantara at the southern tip of the mountain range that parallels the north coast of Cyprus. Here he put up a spirited defense. The castle was besieged by Sir Anseau de Brie, an ardent supporter of the Ibelins.

The latter built a trebuchet that, allegedly "battered down nearly all the walls," without inducing surrender because the bedrock on and into which the castle was built defied destruction. Meanwhile, multiple attempts to assault the castle were successfully repulsed and sorties from the castle defeated. However, Brie was joined by the Lord of Caesarea, whose father had been killed at the Battle of Nicosia, allegedly by Sir Gauvain de Cheneche. Caeasrea brought a "sharp-shooter," a cross-bowman, who he charged with killing Cheneche.  One presumes the archer received a handsome reward because he was successful. Although Cheneche's stepbrother assumed command of the defense of Kantara, morale was shaken and supplies soon ran low. After ten months, the new commander Sir Philip de Chenard surrendered Kantara to Brie and Caesarea.

The siege of Kantara is notable too for the recorded deployment of "psychological warfare." One of the adherents of Ibelin, the later-famous historian, philosopher, and legal scholar Philip de Novare, wrote satirical verses deriding the defenders of Kantara and sang them outside the castle walls. As one historian noted, this was "a tactic not to be underestimated since...success of a siege depended on the morale...." (Hans-Ulrich Wiblinger, The Mountain Castles of Cyprus, [Nicosia: Pilot Publications, 1993] 25).

Yet despite the success at Kyrenia and the drama at Kantara, the most important siege was that at St. Hilarion. It was here that three of the Imperial Baillies (Amaury Barlais, Amaury de Bethsan, and Hugh de Gibelet) had taken refuge. Not only was Barlais viewed as the most dangerous of the Imperial Baillies, but he also controlled the person of the young, underaged king, who he had with him in St. Hilarion.

The castle of St. Hilarion had been built by the Byzantines late in the 10th century after the island had been freed from the Arabs. It stands 700 meters (2275 feet) above sea level on the narrow ridge of a mountain range just slightly southwest of the port of Kyrenia. At the time Barlais retreated there, it had never been taken by assault -- and it never would be. The Lord of Beirut, facing such a formidable castle and wishing to avoid a direct assault that would endanger his young king, had no choice but to besiege the castle.

Sieges are notoriously tedious. Leaving his three eldest sons (youths aged at most 21, 22 and 23 if not younger) in command of the siege of St. Hilarion, the Lord of Beirut concentrated on securing the surrender of Kyrenia and overseeing the siege and assaults on Kantara. Unfortunately, as the siege dragged on, the young sons of Beirut, Sirs Balian, Baldwin, and Hugh, got bored and absented themselves from the siege. At once the Imperial Ballies sallied forth out of St. Hilarion, over-ran the siege camp, and captured provisions. These they carried back inside the castle to supplement their own diminishing reserves.

Hearing of the sortie in Nicosia, Sir Balian rushed back with only a handful of knights. He rapidly recovered the siege camp, and "spurring up to the gate of the wall, broke his lance on the iron of the wall gate; he had so few strong men that this battle was amazing...." -- according to the contemporary eye-witness Sir Philip de Novare. (The Wars of Frederick II against the Ibelins in Syria and Cyprus, translated by John de La Monte [New York: Columbia University Press, 1936] 106.) More important, of course, his father realized that a rotation needed to be established so that there was always a commander -- and only one commander -- at all times.

So the siege continued, and Sir Philip attempted his psychological warfare here as well -- with the effect that he became a target for the besieged. According to his own account, he was hit by a thrown lance that penetrated his arm and pinned it to his rib-cage. In this state, unable to defend himself, men from the castle took hold of the bridle of his horse and tried to take him hostage, while from the walls the defenders taunted: "Your singer is dead, he has been killed!" (Novare, 106)  Novare was rescued by Sir Balian and bragged that he wrote a new song that same evening which he soon sang loudly before the castle walls to prove he was not yet dead.

By Easter 1230, those in the castle were suffering from a severe shortage of supplies. They had already slaughtered and eaten their horses and were reduced to killing a captured donkey for their Easter "feast." It was also clear that the Holy Roman Emperor was not going to send an army to rescue them. The Baillies were now in a difficult position. They had made themselves unpopular by their taxation, extortion and general high-handedness. They had lost a decisive battle and no longer had the resources to continue the war. But they held an all-important trump: they had the king.

Henry de Lusignan had been 12 years old when the siege of St. Hilarion started, and he saw his 13th birthday from inside St. Hilarion while food and -- one presumes -- morale dwindled. The men who held him had been appointed his guardians by the Holy Roman Emperor, but he had little reason to love or trust either the Emperor or the Emperor's Baillies. The Emperor had swept down on his kingdom and immediately sparked a rebellion (See: https://defendingcrusaderkingdoms.blogspot.com/2018/12/the-emperors-banquet.html) He had then dragged the 12-year-old to Syria, a virtual prisoner to strangers, then married him to a woman Henry had never met and sold Henry's guardianship to the five Ballies. Regardless of how honorable these men and regardless of how legitimate their grievances against the Ibelins, Henry could only have felt like a puppet in their hands. Certainly, he was afraid of them.

Outside the castle, on the other hand, was the man elected by his barons as his guardian, and more important the brother of the man who had been his guardian and regent for the better part of his life (from his 2nd to his 11th year). Henry had every reason to want to escape from St. Hilarion and the three men holding him there. But Henry had nothing to say in the matter.

According to Novare, the Lord of Beirut was also anxious to end the siege. Sieges were notoriously expensive and Beirut's resources were not unlimited. He had already spent a fortune raising the army to invade Cyprus in the first place, and he'd had to support sieges at Kyrenia and Kantara as well. Most important, however, his siege of St. Hilarion put him in the awkward position of besieging his king, his liege. On the surface, this was treason. Beirut could only justify his actions by claiming -- rightly -- that Henry was a prisoner of the Emperor's Baillies and that his siege was in support, rather than targeted at, the king. Yet, no matter how right Beirut might be in fact, the optics of his siege were negative and so damaging of his reputation.

Notably, Novare also reports that Beirut "feared that [King Henry] would be taken out of the castle by night to someplace and sent to Apulia." (Novare, 110) In short, Beirut believed that the Baillies were capable of spiriting the King of Cyprus away from his kingdom and placing him in the control of the Holy Roman Emperor. Once in Apulia, it is doubtful if Henry would ever have set eyes on his kingdom again. It is far more probable he would have remained a "guest" of his "overlord" Frederick II, while the latter claimed the right to appoint regents and retain the revenues of the kingdom.

Beirut chose the lesser evil. Through the mediation of a knight of the Hospital, William de Teneres, he negotiated the surrender of St. Hilarion. The terms were complete amnesty and, so the retention of all estates and honors, for the Emperor's Baillies. The only thing the Emperor's Baillies lost was the right to call themselves Baillies -- and their control of the king. They became again mere barons of Cyprus, welcomed at court, and treated as if nothing had happened.

The problem with that was that it solved nothing. The tensions and rivalries that had festered before the Emperor's arrival and had been exacerbated by his policies during and after the 6th Crusade continued to divide the Emperor's men from the Ibelins and their supporters. It would take a second round and another defeat before the Emperor's men were finally expelled from Cyprus and King Henry was able to rule in his own right.

The siege of St. Hilarion is described in Rebels Against Tyranny. 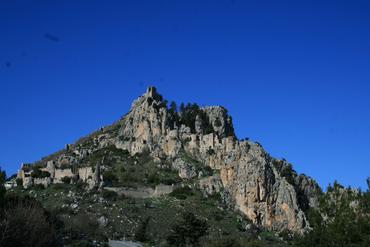