A Re-examination of Crusader Society based on the Evidence 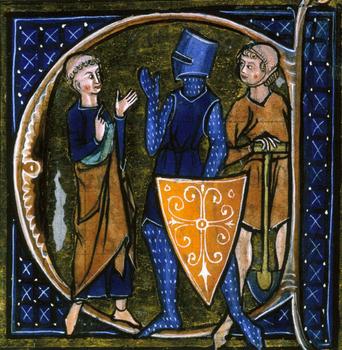 For the better part of the 20th century, Frankish society in the Holy Land was depicted as a decadent urban elite, collecting rents from oppressed native farmers. Allegedly, the Franks were afraid to venture into the hostile environment of the countryside, not only because of an “ever present” Saracen threat, but also because they were hated by their own tenants and subjects. Some historians such as Joshua Prawer did not hesitate to draw parallels between Frankish rule in Palestine/Syria and apartheid in South Africa. This thesis effectively denied the feudal nature of society in Outremer, replacing it with a "colonial" model.

Yet such conclusions, no matter how superficially convincing or confidently proclaimed, have been rendered obsolete by the meticulous studies and archaeological surveys conducted by the Hebrew University of Jerusalem. What follows is a short summary of the findings of these studies.

In his seminal work Frankish Rural Settlement in the Latin Kingdom of Jerusalem (Ellenblum, Ronnie. Cambridge University Press, 1998) Professor Ellenblum has catalogued the findings of meticulous (indeed tedious) study of legal documents recording the demarcation and/or sale and settlement of disputes over landed property combined with an intensive archaeological survey. The “data mining” of the documents enabled the “reconstruction” of entire villages ― property by property ― identifying in the process the origins and vocations of many of the inhabitants. The archaeological survey turned up roughly 200 Frankish settlements in the geographically limited area of the study alone. Most of these had never been heard of before, either because the settlements themselves had since been abandoned, ruined and obliterated by nature, or because their Frankish origins were hidden behind modern Arabic names and more recent construction.

This research revealed that Frankish rural settlement was much more widespread than had been previously assumed ― without evidence. The Franks, the survey proved, built large numbers of smaller towns and villages, often without walls or fortifications of any kind ― a clear indication that they did not feel as threatened as historians hypothesized. The survey further uncovered evidence of Frankish manor houses and farm houses, of Frankish mills, irrigation and terracing systems and of roads. The latter, as Ellenblum points out, required not only a major investment in construction, but also a permanent investment in maintenance.  Perhaps most significant, the survey turned up hundreds of parish churches, an investment that underlined the fact that these villages were not inhabited by a Muslim peasant population. The villagers and permanent residents of these Frankish settlements were irrefutably Christian, since churches need not be built where there are no parishioners. (Note: in other regions mosques proliferated.)

While it cannot be proved that the Frankish lords lived permanently in the rural castles and manors they built, it is hardly credible that they built large, expensive stone manors and castles for the comfort of their “oppressed” native serfs. Furthermore, the documentary evidence revealed that many of these rural manors owed sergeants or knights to the lord.  In short, just as in Europe, these rural estates were held as fiefs by the Frankish elite.  In contrast to the assumptions of earlier historians, the backbone of the Frankish army was composed of rural knights, who drew their income from agriculture not urban “money fiefs.”  The knights of Outremer, far from being the decadent city-dwellers of legend, were countrymen and farmers, just as they were in Western Europe.

Equally significant, the Frankish settlers did not displace the local inhabitants, expelling them from their land and houses.   They did not deprive them of either their land or their status. On the contrary, the documentary evidence proves that the Franks were punctilious in recording and respecting the rights of the Syrian inhabitants. Rather than displacing the locals, they built villages and towns in previously unsettled areas or, more commonly, built beside existing towns.  The most common pattern was to build a castle/manor on the highest point outside an existing town/village and settle Frankish farmers at the foot of this administrative center. The native towns and villages, usually located in valleys, were left intact along with the ownership of the land cultivated by the native inhabitants. What this meant is that the Frankish settlers were bringing new land under cultivation. To do that they built terraces, reservoirs, cisterns and highly sophisticated irrigation systems, sometimes based on dams and mills or employing aqueducts.

And who were these settlers? Based on nearly complete records for a sampling of settlements it is possible to show that these settlers came from widely separated areas in the West. For example, in the town of Mahomeria 150 Frankish households were identified with heads-of-household originating in Burgundy, Poitiers, Lombardy, the Ile de France, Bourges, Provence, Gascony, Catalonia, the Auverge, Tournai, Venice and eight other towns no longer clearly identifiable but apparently in France or Italy. The largest number of families coming from any one place was four.

This helps explain why, as Fulcher of Chartes claimed in his History, the settlers rapidly lost their ties to their “old country” and identified with their new residence. (“We who were Occidentals have now become Orientals. He who was a Roman or a Frank has in this land been made into a Galilean or Palestinian.” Fulcher of Chartes, A History of the Expedition to Jerusalem, 1095-1127, Book II.) Ellemblum points out that the 12th century was a period in which many people were emigrating from their place of birth to new areas in search of better opportunities, and that the Holy Land was only one of the options available to these adventurous and ambitious settlers.

Equally important, and a major thesis of Ellenblum’s work, is the fact that the “Franks” (whatever their place of origin) settled almost exclusively near to existing native Christian communities. Even new settlements were in regions where the nearest communities were predominantly Christian. Indeed, the Franks in some cases built castles in response to requests from the native Christian population. For example, the castle of Kerak in Oultrejourdain was built in 1142 because “the Christian inhabitants of the place begged the Franks to build the castle in order to protect them.” (Ellenblum, p. 141.) However, as Ellenblum proves, the Franks avoided settling in regions that were predominantly Muslim.

This was possible because large parts of the Holy Land were still predominantly Christian. For example, Muslim scholar Ibn al-Arabi, who spent several years in Palestine shortly before the First Crusade, wrote that the countryside around Jerusalem (as opposed to the region around Acre) was “still theirs” ― i.e. still Christian! Indeed, areas with the greatest concentration of Frankish settlements in the 12th century still had many towns that were still predominately ― if not exclusively ― Christian in the 1922 census! For example, the 1922 census for the town of Abud recorded 335 Greek Orthodox Christians and 41 Latin Orthodox Christians and not one single Muslim.

What this tells us is that the Islamization of the Holy Land was neither as complete nor as geographically homogeneous as historians previously assumed. If, as has been argued by other historians, people converted to Islam to avoid the extra taxes, humiliations and disadvantages of life as a "dhimmis” (non-Muslims of either Christian or Jewish faith, i.e. “people of the Book,” who had not yet converted to Islam), then Islamization should have occurred evenly across the entire region. Opportunists and men of ambition are not concentrated by location.  Instead, as Ellenblum proves beyond a shadow of a doubt, the Muslim population was concentrated in clearly delineated regions.

Furthermore, Ellenblum postulates that the Muslim population of the Holy Land in the 12th century were for the most part not converts but immigrants. Taking the example of Samaria, a predominantly Muslim region during the crusader period, he shows that the region had been largely depopulated before the Arab invasions.  “In the revolt of 529 almost 20,000 Samaritans were killed in one battle and others fled over the Jordan…The last revolt of 556 was followed by massive expropriation of property and a plague that decimated the population.” (Ellenblum, p. 262.) When the Arab invasion came, Samaria was still desolate and largely unpopulated: “…the region was abandoned by its original sedentary population and the subsequent vacuum was apparently filled by nomads who, at a later stage, gradually became sedentarized.” (Ellenblum, p. 264.) In short, by the 12th century, the inhabitants of Samaria were largely Muslim, but not because the Christian/Jewish/Samaritan population had converted, but rather because Muslims from elsewhere had settled there.

The patterns of settlement meticulously documented by the Hebrew University of Jerusalem has other implications for Frankish society.  Because Franks settled almost exclusively in regions that were still predominantly Christian they did not feel like aliens nor did they feel threatened by possible cooperation between their native neighbors and their Muslim enemies. After all, in several well-documented cases “the local Christian population…was overjoyed at the conquest of First Crusade and…welcomed the Frankish conquerors.” (Ellenblum, p.136)  When the Frankish settlers (farmers and craftsmen rather than soldiers) followed the crusaders (men of war) to the Holy Land, they built and shared the churches with the Orthodox natives, just as they shared the markets and intermarried with native Christians. Native Christians, as Christopher MacEvitt (The Crusades and the Christian World of the East: Rough Tolerance. University of Pennsylvania Press, 2008) also documented, were integrated into the Frankish administration. While they did not form the pinnacle of either secular or ecclesiastical society, they held positions of authority, responsibility and trust.

In conclusion, the work of the Hebrew University of Jerusalem shows that the crusader Kingdom of Jerusalem was not a fragile construct composed of a tiny and frightened alien, urban elite living separated from (and looking down on) their predominantly Muslim subjects.  The Frankish elites did not hover behind the high walls of cities and isolated castles, in constant fear of their “subjugated” native population and the next Saracen attack.  On the contrary, the Muslims living inside the Kingdom were almost certainly still a minority of the population, living in concentrated in pockets where the Franks did not settle, and for long periods, notably from 1120 to 1177, there were no invasions of the core of the Kingdom of Jerusalem. In short, the Frankish population felt completely secure for the better part of the 12th century.

Likewise, although there were urban Latin elites, notably the Italian communes, that were by nature city-dwellers in Italy no less than in Syria, these were not the backbone of Frankish society.  Large numbers, easily more than the previously estimated 140,000 Frankish settlers (estimates that pre-date the archaeological survey of the Hebrew University of Jerusalem), lived in essentially rural communities, making up a substantial portion of the population.  Most of the knights of the Frankish army, like knights in England and France, likewise lived on rural estates and earned their income from agriculture. The Franks shared towns and churches, mills, reservoirs, and wells with the still predominantly Christian native population, and it was this mix of Frankish and native Christians that constituted and characterized the crusader Kingdom of Jerusalem in the 12th century.