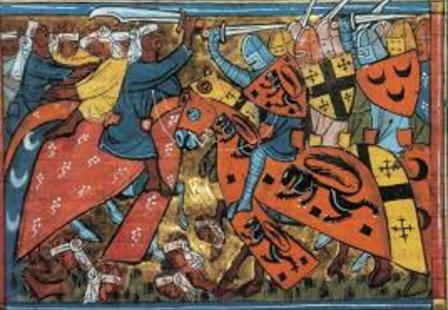 The devastating defeat of the combined Christian army at the Battle of Hattin on July 4, 1187, was one of the most significant disasters in medieval military history.  Christian casualties at the battle were so enormous, that the defense of the rest of the Kingdom of Jerusalem became impossible, and so the defeat at Hattin led directly to the loss of the entire kingdom including Jerusalem itself. The loss of the Holy City led to the Third Crusade, and so to the death of the Holy Roman Emperor Friedrich I “Barbarossa”, and to an extended absence from his domains on the part of Richard I “the Lionheart.” Both circumstances had a profound impact on the balance of power in Western Europe. Meanwhile, the role of the critical of Pisan and Genoese fleets in supplying the only city left in Christian hands, Tyre, and in supporting Richard I’s land army resulted in trading privileges that led to the establishment of powerful trading centers in the Levant. These, in turn, fostered the exchange of goods and ideas that led historian Claude Reignier Condor to write at the end of the 19th Century that: “…the result of the Crusades was the Renaissance.” (The Latin Kingdom of Jerusalem 1099 to 1291 AD, The Committee of Palestine Exploration Fund, 1897, p. 163.)

The importance of Hattin to contemporaries was not just the magnitude of the defeat, but the unexpectedness of it.  In retrospect, the victory seems inevitable. Muslim states had always surrounded the crusader kingdom (as they hem in Israel today) and the Muslim rulers could always been able to call on much larger military forces than their Christian opponents.  In the early years of Latin presence in the Holy Land, the divisions among the Muslim leaders, most especially the rivalry and hatred between Shiite Caliphate of Cairo and the Sunni Caliphate of Damascus, had played into Christian hands.  However, once Saladin had managed to unite Syria and Egypt under a single, charismatic leader the balance of power clearly tipped to the Muslims.

This ignores the fact that Christian armies under Baldwin IV of Jerusalem and Richard I of England defeated Saladin on the battlefield more than once.  Saladin was a powerful, charismatic and clever commander, who knew how to deploy his forces effectively and use terrain to his advantage — but he was not invincible. Indeed, he was dealt a defeat every bit as devastating as Hattin in November 1177 at the Battle of Montgisard. His invading army was annihilated, and he himself had to flee on the back of a pack-camel. In July 1182, the Christian army under Baldwin IV stopped another full-scale invasion by Saladin, forcing him to withdraw across the Jordan with comparatively few Christian losses. In June the following year, 1183, the Christian army confronted yet another invasion on an even larger force and again forced Saladin to withdraw — this time without even engaging in an all-out battle.

Despite these apparent successes, it was clear to the King of Jerusalem that Saladin was getting stronger with each new invasion attempt.  Saladin had increased his own power base from Cairo and Damascus to Aleppo, Homs and Mosul, while the Christians had no new infusions of blood, territory or income. In consequence, in 1184 Baldwin IV sent a frantic plea to the West, begging for a new crusade and offering the Western leader — whoever he might be — the keys to the kingdom. The lack of response reflected Western complacency about the threat to Jerusalem and implicit confidence in the ability of Baldwin and his barons to continue to defeat Saladin’s attempts to push the Christian kingdom into the sea.

It was because of Baldwin’s earlier successes against Saladin, that the news of Hattin and the loss of Jerusalem shocked the West, allegedly causing the immediate death of Pope Urban III. How was it possible that a young and vigorous king, Guy I, could lead the same army to defeat that a youth suffering from leprosy (and only commanding his armies from a liter) had led to victory again and again?

Rarely in human history has a defeat been so wholly attributable to poor generalship on the losing side as at Hattin. To be sure, Saladin set a trap for the Christian armies. The bait was the citizens and garrison of Tiberius under the command of the Countess of Tripoli, who were besieged in the citadel after the fall of the city on July 2.  The Christian army was mustered at Sephorie, only some 15 miles to the west. The pleas for help from the Countess and Tiberius naturally evoked a response from the Christian army, most notably her four grown sons.  But the Count of Tripoli himself warned that it was a trap and opposed the decision to go to the aid of Tiberius. Tripoli’s reasoning convinced the majority of his peers and the council of war composed of the leading barons agreed to stay where they were and force Saladin to come to them. However, the Grand Master of the Temple went separately and secretly to King Guy after the council dispersed and convinced him to order the advance for the following day. In short, although warned, King Guy took the bait.

To relieve Tiberius, the Christian army had to cross territory that was at this time of year devoid of fodder for the horses and where water sources were widely dispersed. With Saladin’s forces already occupying the springs at Cafarsset, on the southern route from Sephorie to Tiberias, the Christian had no choice but to follow the northern track, which led via the springs of Turan. Intense heat and harassment by the enemy slowed the Christian march to a crawl, and by noon on July 3, the Christian army had advanced only six miles to the springs of Turan.  With nine miles more to go, it was clear the army could not reach Tiberius before nightfall and prudence alone should have dictated a halt at Turan, where men and horse could rest and drink. Instead, King Guy against all reason ordered the advance to continue. Immediately, Saladin sent his troops to occupy Turan, thereby not-only blocking the Christian retreat but harassing the Christian rear-guard and further slowing the rate of advance.

When darkness fell on July 3, the Christian army was still six miles short of its objective and forced to camp in an open field completely surrounded by enemy forces.  The Christians had been marching and fighting for hours without water in the intense heat of a Palestinian summer. Men and horses were exhausted and further demoralized by the sound of Saracen drums surrounding them and the countless campfires advertising the enemy’s strength.

By morning, those fires were brush-fires intentionally set ablaze to windward of the Christian army in a maneuver that dried their already parched throats further while half-blinding them with smoke. Out of the smoke came volleys of arrows, and again “some of the Christian lords” urged King Guy to charge Saladin’s position at once, in an attempt to win the battle by killing the Sultan.  King Guy instead chose to try to march the entire army toward the springs of Hattin, still some three miles away and cut off by one wing of Saladin’s army.

While the Christian cavalry tried to drive off the Saracen cavalry in a series of charges and counter-charges, the infantry stumbled forward until, half-blinded by smoke, constantly attacked by the enemy and near dying of thirst, the morale of the Christian infantry broke.  As casualties mounted, some of the infantry retreated up the slopes of the “horns” of Hattin, two steep hills that flanked the plane on which the army had camped and now marched and refused to fight any more.

Meanwhile, the Count of Tripoli with his knights and Lord Reginald of Sidon finally broke-through the surrounding enemy, charging east toward the Lake of Tiberius.  The Christian infantry that had not fled up the slopes tried to follow in the wake of the cavalry, but the Saracens under the command of one of Saladin’s nephews stepped aside to let the armored knights through and then closed ranks again, cutting off the Christian infantry that was cut down or taken captive.

By now it was later afternoon, and with the infantry either already slaughtered or refusing to come down from the hilltop, King Guy ordered his knights to retreat up the slope as well. By now, many of the knights were fighting on foot because their horses became vulnerable once the infantry cover was withdrawn.  It was probably at this stage in the battle that the relic, believed to be a piece of the cross on which Christ was crucified, was lost. The Bishop of Acre, who had been carrying it, was killed, and the effect on Christian morale of the loss of this most precious relic — believed to have brought victory in dozens of earlier battles was devastating.

But still, King Guy did not surrender.  What few knights were still mounted made one (or two) last desperate charge(s) to try to kill Saladin, who was mounted and clearly identifiable among his troops.  This charge was probably lead by Balian d’Ibelin. While the charge came close enough to Saladin for him to have to shout encouragement to his men, like Tripoli before him, once Ibelin was through the enemy, he had no chance of fighting his way back up-hill through the ever-thickening ranks of the enemy closing in on their prey. Within minutes, King Guy’s last position was over-run and he along with most of his barons were taken prisoner.

Of the roughly 20,000 Christian soldiers who had set out from Sephorie, only an estimated 3,000 infantry managed somehow to escape into the surrounding countryside and eventually take refuge in the castles and walled towns then still in Christian hands. Of the 1,200 knights and barons that mustered for the battle, only four barons, Tripoli, Sidon, Edessa and Ibelin, escaped capture along with maybe 100 - 200 knights. The remainder including the King of Jerusalem, the Masters of the Temple and Hospital, the Constable Aimery de Lusignan, the Lords of Oultrajourdain, Toron, Gibelet, and others — effectively the entire nobility of the Kingdom of Jerusalem. While the majority of these lords and knights were held for ransom, the 230 Templars and Hospitallers that survived the battle were executed at Saladin’s orders.

As a result of these losses, both killed and captured, the kingdom was effectively denuded of defenders. King Guy had issued the equivalent of the “levee en masse” of the Napoleonic era, the arriere ban, and every able-bodied fighting man had mustered at Sephorie. Left behind in the castles, towns and cities were women, children, the old and the ill. There were no garrisons capable of offering effective resistance. Worse, even if there had been, there was no point to resistance since there was no army capable of coming to the relief of a city under siege. Thus when Saladin’s army appeared before the walls of one fortress or city after another, the citizens had the choice of surrender in exchange for their lives and such valuables as they could carry or hopeless resistance. Since the rules of contemporary warfare dictated that resistance justified massacre, rape and enslavement, it is hardly surprising that the Christian cities and castles capitulated one after another, starting with Nazareth, and the Acre on July 8, followed by Haifa, Caesarea, Arsuf, Jaffa, Ramla, Ibelin, Darum, Sidon, Beirut, Gibelet, Nablus, Beirut and Ascalon.

By mid-September, only isolated castles and two cities defied Saladin: Tyre which was particularly defensible and to which he barons of Tripoli and Sidon and the garrisons of the surrendered cities withdrew, and Jerusalem itself.  But the siege of Jerusalem is material for another post….

The Battle of Hattin is a major episode in Defender of Jerusalem, the second book in the Jerusalem Trilogy.

The Battle of Hattin:

An Avoidable Defeat with Devastating Consequences