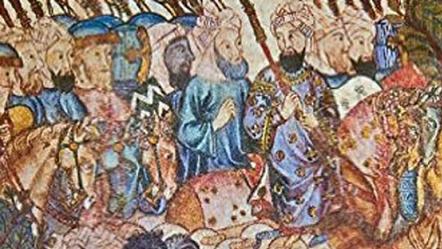 The crusader kingdoms consistently faced an enemy that significantly outnumbered them, and it is often this sense of "massive hordes" that dominates descriptions of Saracen armies. Yet while the size of Saracen armies was certainly a factor in their success, it was by no means their only significant feature. On the contrary, Saracen armies were extremely complex and understanding them better helps explain Frankish tactics.

Perhaps the most important yet often forgotten characteristic of Saracen armies was their ethnic diversity. The term "Saracen" simply means "Easterner" and referred collectively to the Muslim opponents of the crusaders.  Yet while the use of this term is convenient, it plasters over and so disguises the ethnic differences within the "Saracen" armies. The "Saracen" armies included not only Arabs and Turks, the two largest ethnic groups engaged in warfare against the crusaders. They also included Kurds (Saladin himself was a Kurd), Nubians, and Berbers. Furthermore, the Arab elements need to be sub-divided into Syrians, Bedouins and Egyptians, and the term "Turk" actually covers a variety of Turkmenish tribes.

Each of these ethnic groups had their own more or less distinct ways of fighting along with their own language, dress, and preferred weapons. In broad terms, the Nubians were famous infantry archers, who fought with large powerful bows but without shields of any kind, making them very vulnerable in close engagements.  The Arabs, Kurds and Berbers generally fought on horseback with lance, javelin and sword, but Bedouins fought more often as infantry archers. The Turks were the masters of mounted archery.

It was the Turks with their highly mobile cavalry and mounted archers that most impressed the crusaders. Based on Christian descriptions, the crusaders found the infantry and even the heavy cavalry of their opponents unremarkable. The mounted archers on the other hand, with their tactics of pressing in close for a volley of arrows only to flee when challenged, frustrated and won grudging respect from the Franks. The Turkish tactic of pretending flight to lure Frankish cavalry into an ambush was well-recorded and highly effective--over and over again. The comparison to a pesky fly is colorful but somewhat deceptive since these "flies" could kill.

The diversity of tradition in Saracen armies had advantages and disadvantages. Good commanders could exploit the strengths of their various troops and use them to complement one another. Less effective commanders found their armies disintegrating or the units operating independently of one another. It was easy for the infantry to get left behind, forgotten and slaughtered. Cavalry without infantry support was vulnerable when they stopped to rest and water their horses, and utterly useless in siege warfare--which was the dominant form of engagement in the crusader period.

In addition to the ethnic differences within the Saracen armies, there were different kinds of service as well. At the one extreme and completely unknown in the West, Saracen commanders always had a contingent of slave-soldiers completely devoted to them. These slave-soldiers or Mamluks (also Mamelukes and Mamlukes) formed the personal body-guard of commanders and lords. They were composed of men who had been acquired as children (carefully selected, one presumes, for their physical appearance and health) and trained meticulously and rigorously for years to make them crack troops. Although technically "freed" on completion of training, they remained emotionally and financially bound to their master. They were professionals, with no other interests or purpose other than to serving their master in war.

In contrast, the bulk of the troops in a Saracen army were similar to feudal levees in the West. They were men with land and families, who served in the army when called-up, or as volunteers, but who were not professional soldiers. The quality of such troops obviously varied widely. Some of them, young, virile and ambitious were undoubtedly very good. Others, aging, ailing or just disinterested, were not so good.

One element that was of mixed value were the jihadists. These men joined Saracen armies engaged in warfare against the crusader states for religious purification. While often untrained and poorly armed, they were fanatical and often keen for a martyr's death in battle against the "polytheists."  In consequence, these troops could be used for particularly dangerous tasks such as storming a breech in a wall or scaling a siege ladder.

As in the West, most of Saracen troops (like the Mamluks) owed service to a lord or emir, not to the Sultan directly. Thus, as in the West, a Saracen army was composed of small, close-knit clusters of troops bound to a land-owner, who himself owed service to a larger land-owner, who owed service to an even larger land-owner etc. until one came to the top, the Sultan himself. Yet while all theoretically served the Sultan directly or indirectly, the reality was that men served the men they personally knew. If their immediate lord changed sides or just decided to go home, then they did so too. As a result, the only troops the Sultan could rely on 100% were his Mamluks (until they too revolted, cut the Sultan to pieces and took control for themselves, but that wasn't until the mid-13th Century.)

In short, the Sultan, like a medieval King, was dependent upon the loyalty and support of his most powerful emirs, and the emirs had power similar to barons in medieval Europe, with one important difference: the emirs did not hold territory on a hereditary basis. They served as administrators of territory or other sources of revenue (such as customs, or markets) for the Sultan. In theory at least, the Sultans could dismiss them and replace them at whim.

While one might expect this made them more loyal, the evidence suggests the opposite.  Lack of tenure created a sense of insecurity and tended to make emirs more mercenary. Without a vested interest in a specific territory, they were always open to alternative opportunities -- from a different Sultan, or a brother, cousin or son willing to challenge the reigning Sultan. With no long-term perspectives, there was also a strong bias toward plundering one's current position, whether it was territorial or purely administrative.

Furthermore, the fact that emirs came and went (squeezing as much revenue as possible from their subjects) undermined loyalty. Tenants farmers and peasants had little reason to identify with the ever changing cast of landlords sent to exploit them. This fact is reflected in the tendency of Saracen forces to dissolve comparatively rapidly. Saladin had consistent difficulty keeping his troops in the field for more than a  month or so. Even after his great victory at Hattin and the plundering of an entire kingdom, his troops faded away when the rains started.

To compensate for the generally low levels of loyalty and morale among the conscripts, Saracen leaders depended increasingly upon mercenaries. These were predominantly drawn from the nomadic tribes of the Asian steppes, but included Armenians, further adding to the overall diversity of the Saracen force.