The Constitutional Crisis of 1186: Usurpation of a Crown 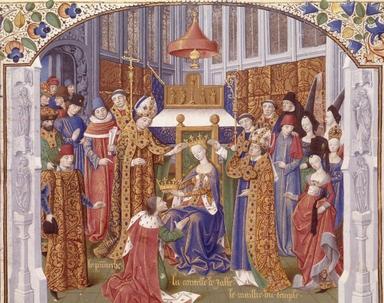 In August 1186, Baldwin V of Jerusalem died at the age of nine. His death had been anticipated even before he became king, and it was the presumption that he would not live to sire heirs of his body that led his predecessor and uncle, Baldwin IV, to settle the succession in advance.

On his deathbed, Baldwin IV had made his barons and bishops swear to seek the advice of the Pope, the Holy Roman Emperor and the Kings of England and France about the successor to his nephew, Baldwin V. The reason was simple: Baldwin V’s closest relative (and so his heir presumptive) was his mother.  While the constitution of Jerusalem allowed women to reign in their own right, it did so only if they had a consort, a husband capable of leading the feudal armies in the threatened Christian kingdom. Sibylla of Jerusalem had a husband — but one that almost no one on the High Court of Jerusalem considered worthy or capable of fulfilling that task. He was the man who would ultimately lead the feudal armies to an unnecessary defeat — but that is getting ahead of the story. At the time of his brother-in-law’s death, Guy de Lusignan was simply a comparative newcomer to the Holy Land, who had succeeded in alienating almost the entire local elite in less than a decade.

Thus, when Baldwin V died, the lords secular and scared of the Kingdom of Jerusalem were bound by oath to seek the advice of the most powerful men in the Latin West.   The kingdom was also surrounded by enemies that had been united by the ambitious, charismatic and ruthless Kurdish leader Salah ad-Din, more commonly known in the West as Saladin. By 1186, Saladin had declared jihad against the crusader states and had already led four full-scale invasions in addition to numerous smaller-scaled campaigns.  There was a short truce in effect and the forces of Jerusalem had so far succeeded in beating off Saladin’s attacks, but the situation was clearly precarious. Under the circumstance, the bishops and barons of Jerusalem were understandably reluctant to await the decision of Western leaders notoriously at odds with one another. The Kings of England and France (Henry II and Philip II respectively) were engaged in nearly perpetual warfare against one another, after all.  Another solution was needed.

The Constitution of the Kingdom of Jerusalem was by this time a well-developed document, which had evolved based on the unique history of the kingdom. The kingdom had been established in 1099 as a result of the First Crusade. That campaign had been led by a group of noblemen, who commanded jointly and did not recognize any of their number as superior to the others.  When, having captured Jerusalem, they recognized the need for more permanent leadership structures, they chose among themselves Godfrey de Bouillon to “rule,” but he was still effectively little more than “first among equals.” Furthermore, he explicitly refused the title of “king” on the grounds that it would be inappropriate for a man to wear a crown of gold where Christ had worn a crown of thorns. Furthermore, within a year Godfrey de Bouillon was dead. The leaders of the First Crusade met again to “elect” their leaders, and although this time their choice, Baldwin de Bouillon (younger brother of Godfrey) had himself crowned, the precedent had been set that the kingship was based less on hereditary right than on the consent of the leaders. By 1186 this tradition had been institutionalized in the form of the High Court of Jerusalem, which retained the right to “elect” the next king at the death of the last.

Although over the years the High Court had shown a strong bias toward choosing a close relative of the previous king, on more than one occasion there were several viable options and the High Court had effectively exercised its rights. Furthermore, the High Court had demonstrated the power to make contenders bow to its will as when, for example, it forced the obvious heir to Baldwin III, his brother Amalric, to set aside his wife of six years (Agnes de Courtenay) before he was acknowledged, crowned and anointed.

Given the threat Saladin posed, no one in the Kingdom of Jerusalem wanted to risk a long interregnum after the death of Baldwin V, while the Pope, Holy Roman Emperor and the Kings of England and France were consulted (and possible bickered) over the next king. Furthermore, there were two obvious successors to Baldwin IV: his elder, full-sister Sibylla — who was unfortunately married to the unacceptable Guy de Lusignan, and his younger, half-sister Isabella, married to a perfectly acceptable young man. Had Sibylla been married to a man more agreeable to the High Court, there is little doubt that the High Court would rapidly have recognized Sibylla. But Guy, as I said, had made himself so hated that Sibylla knew she was facing serious opposition — as did Guy.

Rather than risk a reversal in the High Court, the couple rushed to Jerusalem to seize the throne illegally — i.e. without the consent of the High Court. Guy had secured the support of the Templar Grand Master, who used his knights to secure control of the Holy City. Once there, Guy and Sibylla, supported by Sibylla’s maternal uncle the Count of Edessa, and her mother’s former lover the Patriarch, badgered the aging Master of the Hospital into giving up the third key needed to remove the coronation vestments from the treasury.

But there was still the issue of popular opinion, and Sibylla felt compelled to promise she would divorce Guy in order to garner sufficient support to carry out her planned coup. Sibylla made her promise to set Guy aside conditional on being allowed to choose his successor as her husband. On the basis of this promise, Sibylla was crowned queen in the Church of the Holy Sepulcher in Jerusalem in August 1186. She then promptly broke her promise to her own supporters and crowned Guy de Lusignan as her consort, saying she chose him as her “next” husband.*

The problem was that most members of the High Court were not in agreement and not in Jerusalem. They were meeting in the royal city of Nablus to discuss the succession. While surprised by Sibylla’s coronation, they did not accept it. Without the consent of the High Court, her coronation was in their view invalid.

The High Court (or the majority meeting in Nablus) decided that their best course of action, therefore, was to crown Sibylla’s younger half-sister Isabella queen. They sought to thereby create a legitimate ruler force Sibylla into irrelevance if not submission. Given that the barons known to have collected at Nablus represented the some of the richest of the baronies (Tripoli/Galilee, Sidon, Toron, Nablus, Ramla/Mirabel and Ibelin), and probably included a number of unnamed barons as well, any armed confrontation between the factions of the rival queens would almost certainly have resulted in Sibylla’s forces being outnumbered. Sibylla is known to have had only three supporters: Edessa (an empty title since 1144),  Oultrejourdain — and the Templars.

The High Court’s choice of queen, Isabella, was the youngest child of King Amalric, and her mother was the Byzantine Princess Maria Comnena. In 1186 she was 14 years old and she had been married for three years to Humphrey de Toron.  Although Toron was young, probably in his late teens, his family had been in Outremer for generations. His grandfather had been Constable of Jerusalem and had been highly respected. Toron was present in Nablus when the decision was made to crown his wife as an alternative to Sibylla. That same night he fled Nablus, made his way to Jerusalem and did homage to Sibylla.

When the bishops and barons meeting at Nablus discovered what Toron had done, most resigned themselves to the fate of taking oaths to Sibylla and Guy, but two of the most powerful barons did not. The Baron of Ramla and Mirabel refused to do homage to Guy de Lusignan, preferring to abdicate his rights and titles to his infant son. He left the latter and his lands in the care of his younger brother, Balian d’Ibelin, and he left the kingdom altogether to seek service with the Prince of Antioch. The other baron to refuse to recognize Sibylla and Guy’s illegal coronation was Raymond III, Count of Tripoli. Raymond had been regent of the kingdom for both Baldwin IV and Baldwin V. He ruled Tripoli in his own right as an independent county, which did not owe homage to Jerusalem, and he furthermore held the rich and vitally important barony of Galilee by right of his wife. The latter straddled the River Jordan and surrounded the Sea of Galilee. Raymond III refused to take the oath of homage, withdrew from court altogether, and went so far as to seek a separate peace with Salah ad-Din to protect himself from an anticipated attack on his territories by Guy de Lusignan.

While the departure of Ramla did not seriously weaken the kingdom because his brother was a highly competent commander, Tripoli’s defection gutted it. The barony of Galilee lay on the border and extended far toward the coast. It also owed one of the largest contingents of knights to the crown. Without Galilee and Tripoli, the Kingdom of Jerusalem became effectively indefensible.

Sibylla must have known this, and all she had to do to save her kingdom was to keep her word, i.e. to set Guy aside and marry a man acceptable to Tripoli and the other disaffected bishops and barons. She refused. Her love of Guy was so great, she preferred to see her kingdom torn apart, gutted and, ultimately, overrun by the enemy.

To be sure, thanks to the diplomatic skills of Ibelin, a temporary reconciliation was patched up between Tripoli and Lusignan. Tripoli loyally brought his full feudal contingent to the feudal call-up in July 1187. But Lusignan was still king and he proved all his detractors right by leading the combined forces of the kingdom to a completely unnecessary defeat at the Battle of Hattin.

Sibylla lost her kingdom and three years her life. She died of fever during a squalid siege of the jewel of her former kingdom, Acre. Neither need have happened had she acted legally and sought election by the High Court of Jerusalem, rather than seizing the throne in a coup d’etat. Had she followed the constitution, it is almost certain that the High Court would have recognized her as queen but required her to set aside Guy before she was crowned and anointed, just as her father had been forced to set aside her mother.  She would have been required to choose a different husband, a man who enjoyed the confidence and support of the barons of Jerusalem. Whoever that man might have been, he is unlikely to have been as disastrous for the Kingdom of Jerusalem as Guy de Lusignan.

* The exact timing of the coronation of Guy is unclear. Some sources suggest she did it immediately, during her own coronation; others that it was done later in a separate ceremony.