To appreciate the magnitude of the innovations made by the Franks, one must first call to mind that the era of the crusades (the 12th and 13th centuries) was characterized in Western Europe by feudal armies composed of large numbers of poorly equipped amateur infantry (feudal levees), small numbers of mercenaries armed predominantly with cross-bows, pikes, and swords, and even smaller numbers of professional cavalry: knights. Although the later had excellent weapons, armor, and training, they were very expensive to train and equip. These armies were extremely expensive to maintain and were therefore used only rarely and sporadically, while the bulk of fighting consisted of raids designed to destroy the economic base of the enemy by burning crops and orchards and destroying economic assets such as mills, bridges, etc.

Furthermore, because of the topography and fragmented nature of feudal holdings, confrontations tended to be very localized. Likewise, feudalism fostered affinities that were local, based on personal fealty to one’s overlord rather than national armies. While the amateur infantry received little to no training and was prone to panic and flight, the professional knights “made a cult of bravery…[that] promoted a highly individualistic ethos of war….(1) The result was a style of warfare dominated by sieges of key castles supported by attacks on the surrounding economic base. Any direct combat tended to be small-scale, hand-to-hand clashes between contingents of knights in which individual valor and personal rivalries or animosities played an important role.

When the First Crusade crossed into Asia, however, the Europeans were suddenly confronted with a completely new form of warfare. The Turks, who had established their dominance across the Middle East, were a nomadic people who had triumphed in an open and arid landscape by deploying large hordes of light cavalry armed with bows. The preferred tactic of the Turks was to surround their enemies and then kill them slowly and surely from a distance, without engaging in close combat. Their small, agile horses were fleet and if they were attacked, they fled, waited for their pursuers to tire, and then attacked again.

The heavily armored knights of Europe astonished the Turks by their ability to withstand volley after volley of arrows unharmed, yet the European knights could not win a battle unless they could force the Turks to engage in hand-to-hand combat, where the heavier weapons and greater strength of the Frankish knights and horses could prove decisive. A massed charge of Frankish knights proved decisive in battle after battle — but a poorly-timed or poorly-executed charge almost always resulted in disaster for the Franks. Furthermore, the Turks soon recognized that while the fully armored knights were almost invulnerable, their unarmored horses were their Achilles heel. A knight without a horse was not only worthless, he was cold meat. So the Turks rapidly learned to concentrate their arrows on the horses and to try to provoke the knights into charging after them individually or in small, harmless groups that could be lured away from their comrades and ambushed as soon as their horses tired.

The fighting box was a formation in which the most vulnerable components of an army (baggage train, sick and wounded) were placed in the center, surrounded by mounted knights, who were in turn surrounded by infantry with shields. The infantry protected the horses of the knights — until the commander decided it was time to risk a charge. Then the infantry would open and the heavy cavalry would charge the enemy. These fighting boxes could defend stationary positions — or move as a square across long distances. In a retreat the Franks would take the dead along, giving the enemy the impression that there were no casualties at all. When holding firm positions, fighting strength could be maintained by rotating the front-line units.

The most important feature of this tactic is that it required first and foremost discipline — from all participants. Marching and fighting simultaneously are not easy. To be effective, the fighting box had to work as a single unit. It was necessary to prevent gaps from opening up between the ranks yet to keep moving without tiring the infantry. It was important for the infantry to keep their shields locked together — more like a Spartan phalanx than anything vaguely familiar from medieval Europe.

The most famous campaign in which this formation was used to excellent effect was the march from Acre to Jaffa during the Third Crusade. Yet while Richard the Lionheart proved a master in deploying this formation and added support from his fleet, he was not the inventor of this tactic. The Franks of Outremer had used it for nearly 100 years before the Third Crusade. Indeed, the armies of the Kingdom of Jerusalem had used it, again and again, something that testifies to the remarkable discipline of these armies — and, incidentally, contributed to greater respect for infantry and the burghers that comprised it. When that discipline broke down due to poor leadership, however, the result was utter obliteration — as at the Battle of Hattin.

The crusader states established in the Levant in the wake of the First Crusade were surrounded by hostile states, whose leaders increasingly called for jihad to push the “interlopers” back into the sea. Given the vast numerical superiority of their enemies, it is remarkable that these enclaves of Christian control were able to survive for nearly 200 years. Indeed, from 1100 to 1180 and again from 1197–1244, the armies of the Franks were predominantly on the offensive. This was largely due to two military innovations adopted by the Franks very soon after their arrival in the Holy Land: the "fighting box" and mounted archers. Below a description of the "fighting box" and it's importance. 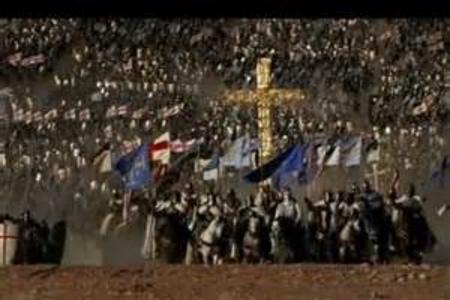