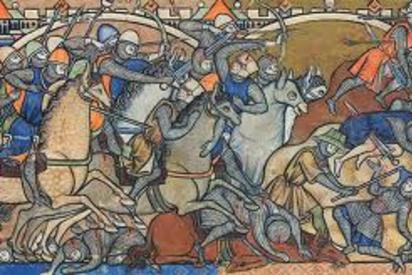 By May 1232, the Lord of Beirut appeared to have his opponent, the Imperial Marshal Riccardo Filangieri on the run. Filangieri had lifted the siege of Beirut citadel in order to withdraw his forces to Tyre. But the triumph was short-lived, and the wheel of fortune spun again.

Beirut's army and his Genoese fleet had only got as far as Casal Imbert when news reached them that the Imperial forces had vacated Beirut (effectively turning it back over to its rightful lord). The very next day, the Patriarch of Antioch sought out the Lord of Beirut to suggest that peace should and could be made between the parties. He had just passed Tyre on his way south and claimed to have full powers to negotiate on behalf of Filangieri. He urged the Lord of Beirut accompany him to Acre where, with the advice of other wise men of the kingdom such as the former regents Balian de Sidon and Eudes de Montbellieard, he promised to arrange an honorable peace between the adversaries.

The Lord of Beirut, who according to Novare "never refused a reasonable peace" willingly agreed to return with the Patriarch to Acre. He did not, however, trust the Archbishop so much as to disperse his army.  Instead, he left both the bulk of his army and his fleet at Casal Imbert under the command of his loyal vassal Sir Anseau de Brie. Notably, the King of Cyprus also remained with the army at Casal Imbert along with three of Beirut's sons (Baldwin, Hugh and Guy) and his nephew John, the future Count of Jaffa. The latter, Novare, says was only only newly knighted and just 17. Guy was roughly the same age and possibly younger, while Hugh and Baldwin were respectively 23 and 24 at the most. King Henry himself was still 14.

The youth and inexperience of these men may explain why they were so complacent. They appear to have interpreted the Imperial withdrawal from Beirut and the peace overtures as weakness on the part of their adversaries. They encamped dispersed, apparently some taking lodgings in the town. More reprehensible was the fact that no sentries were set nor other precautions taken against attack. Indeed, Sir Anseau de Brie allegedly received warnings of an impending Imperial attack and dismissed them as not credible.

But Filangieri had his spies. As soon as he realized the Cypriot host's poor state of preparedness, he gathered his forces and struck. On twenty-two gallies, he brought his army to Casal Imbert from Tyre and struck at night. The Cypriot/Ibelin forces were taken completely by surprise in their sleep.

In the ensuing chaos, the Cypriots fought in their nightshirts and virtually unarmed. Some tried to capture the untacked horses and fight without bridles or saddles.  As long as darkness held, the general confusion appears to have favored them, but with the dawn, their small numbers, lack of equipment and horses were all too plainly revealed. The attack became a rout. The Imperial forces seized the entire camp capturing all the tents with their content and nearly all the horses. They took 24 Cypriot knights captive and killed "a few," according to Novare.

What they did not take was King Henry. At the start of the attack, King Henry had been put "naked" on another man's horse and sent to Acre. He was not simply fleeing the combat and securing his own safety. He brought word to the Lord of Beirut of the attack.  for safety -- and to bring up reinforcements under Beirut. He reached Acre at dawn on the morning of May 3, 1232 -- the morning of his 15th birthday, and with that King Henry had just come of age. He no longer needed any "regent." Henceforth, he was his own man.

Meanwhile, however, the arrival of the "naked" king on a borrowed horse sent shock waves through Acre. Not only did Beirut rapidly muster what men he had, but he was accompanied by the Lords of Sidon, Caesarea and Caiphas as well as Eudes de Montbeliard.  Sidon and Montbelliard had earlier served as Imperial regents and were considered neutral in the conflict. Their presence is a reminder that, despite what blame the Cypriots bore for carelessness, the attack occurred during peace negotiations. International custom -- even in the 13th century -- precluded hostilities during negotiations. Sidon and Montbeliard's presence with Beirut indicates non-partisan condemnation of the attack.

The distance from Acre to Casal Imbert is just over 8 miles. As Beirut advanced, he soon started to encounter men fleeing from Casal Imbert. They cleared the road to make way for the advancing men under Beirut, and a sergeant at once offered to search among them for Beirut's son. Beirut told him not to bother because his sons, he said, would not dare to run so far -- or at least not in a direction where they might run into him!

A little farther along the road, they encountered a sergeant who had been surprised at Casal Imbert. Weeping, he reported that "all" Beirut's sons had been killed in the engagement. Beirut answered, "And what of this? Thus should knights die defending their bodies and their honor."

Beirut put an immediate end to that nonsense and started taking stock of his losses instead. His second son Baldwin was perilously wounded; his nephew John likewise. His son Hugh was completely missing, but he was later found in the town defending himself inside a house, the carcass of his horse on the street outside. Roughly 30 Cypriot knights were dead or captured, and "most" of their horses were gone. Thirty knights may not sound like many, but at this point that represented nearly ten percent of the knights King Henry had brought with him from Cyprus. Perhaps most significantly, the Genoese ships which had been provided to support the operation against Tyre had apparently also been seized by Filangieri's men.

In short, the Ibelins had just suffered a dramatic setback, but far from a crippling blow. As developments would eventually show, Filangieri greatly over-estimated the impact of his victory at Casal Imbert. First, however, flushed with a sense of triumph, he made the dramatic strategic decision to strike at Cyprus. Just as he had struck at the city of Beirut while the Lord of Beirut was on Cyprus, he now struck at Cyprus while the entire Cypriot host was in Syria. The theater of action was about to change yet again, but first the Cypriots had to find a fleet....

The story of the struggle between Beirut and Filangieri continues next week. Meanwhile, these events are depicted in detail in The Emperor Strikes Back.