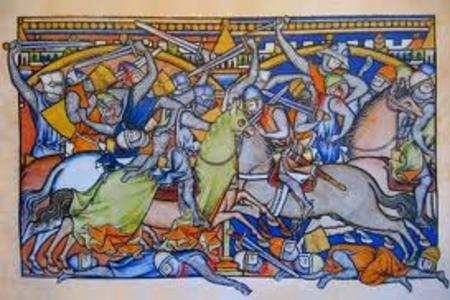 In 1229, the rapaciousness of the Emperor’s baillies provoked a response they apparently had not anticipated. In less than three months, they were facing not resistance or insurgency but a full-scale challenge to their authority in the shape of an invasion. Whereas, with their mercenaries, they had held a monopoly on force of arms up to this point, in early July 1229 they were confronted by an army led by two barons with hundreds of knights.

In the most comprehensive modern history of the Kingdom of Cyprus, Prof. Peter Edbury writes that “spurred on by the news of the sequestration of their fiefs and plight of their womenfolk,”[i] a force of men raised by the Lord of Beirut set sail from Acre and landed at the Templar fort of Gastria to the north of Famagusta. The size of that force is unrecorded, but it must have included several hundred knights. The Five Ballies Frederich II had left in control of Cyprus (See: The Emperor’s Men) controlled not only the feudal resources of the Kingdom of Cyprus, of which they were the effective regents, they had also been supplied with a large force of mercenaries by Emperor Frederick. Although the exact size of this force is likewise unrecorded, all sources agree that it heavily outnumbered the men brought to Cyprus by the Lord of Beirut and his brother-in-law the Lord of Caesarea.

The Ibelins chose to land at a Templar port, possibly in the hope of landing unopposed. The Templars were at this point bitter enemies of Emperor Frederick, who had tried to seize their castle at Athlit and then laid siege to their headquarters at Acre. While the Templars had effectively repelled both of these attacks, the Emperor had the last laugh by confiscating their properties across the Holy Roman Empire and in his Kingdom of Sicily as soon as he arrived back in the West. Meanwhile, however, the Templars chose to remain scrupulously neutral in the secular conflict on Cyprus.

According to Novare, “the five baillies strongly resisted the capture of the port; nonetheless, it was taken by force.”[ii] Given the fact that the return of the Ibelins was hardly expected, it seems unlikely that all five baillies got down to Gastria to defend the port. More probable is simply that they had mercenaries stationed at all the ports of the kingdom, and these forces, representing the five baillies put up a fight but were overwhelmed.

The Imperial forces (whoever they were) withdrew from the coast all the way to the capital of the kingdom, Nicosia, and King Henry was sent under guard to the most luxurious yet still unassailable mountain fortresses of St. Hilarion. Meanwhile, the Lord of Beirut advanced “warily” toward Nicosia, sending “friendly words to the king and even the five baillies, saying that they came from the service to God, that they desired to return to their homes and their fiefs, and that they were prepared both to do right and to exact their rights.”[iii] The baillies, according to Novare, “never deigned to answer.”[iv]

Instead, they called up the feudal army including the commons. This included all the tenants-in-chief of the king, their rear-vassals and knights, the turcopoles or light cavalry supplied by the local elites, and the foot-soldiers and archers of the commons. They also pulled together the mercenaries left behind by Frederick II, who Novare identifies as German, Flemish, and Langobard (south Italian), in short forces from the Holy Roman Empire. They were presumably cross-bowmen for the most part, as that was the preferred weapon of mercenaries in this era. They may also have engaged local mercenaries. Their total force would have numbered in the thousands, with several hundred knights.

When the Ibelin force approached Nicosia, the five baillies took their army and marched out to meet them on the outskirts of the city. Despite efforts by the clergy to broker a reconciliation between the parties, at this point there was no readiness for compromise nor interest in peace on either sidep. The baillies had taken oaths to prevent the Ibelins from returning and knew that the Emperor would not look favorably upon them if they failed to expel Beirut. Since they held their positions at the Emperor’s pleasure, they really had no choice but to attempt to defeat Beirut so soundly that he never dare return.

Indeed, the sources claim that the baillies took the precaution of detailing 25 of their best knights with the task of killing Beirut. This was hardly chivalrous, to say the least, but the reasoning was probably that the elimination of Beirut would end their troubles. Whether they also tasked knights to kill his brother-in-law the former Constable of Cyprus is not recorded, but in light of the outcome, this is not impossible.

It was Saturday, July 14, 1229. The two armies drew up across a plowed field. “The captains of the squadrons surveyed each other and reconnoitered on the one hand and on the other; each placed himself opposite to him whom he most hated…”[v] When the sides clashed, it was (as in all civil wars) with a fury and passion unknown between strangers. Soon the dust of the field had been churned up by the hundreds of hooves and was blown about by a strong west wind. Vision was severely impaired.

Beirut soon found himself cut off from his sons and squires. He was confronted by an attacker without a visor and with a sword-thrust to his mouth cut his head in two, but the collision of the horses forced his own horse into a ditch. Unhorsed, he found himself surrounded by some fifteen enemy knights and none of his own. Fortunately, he had an unnamed number of loyal “sergeants” with him. They helped to extricate Beirut and he took refuge with them together in the called enclosure of a church. Here defended themselves against the attempts of the fifteen imperial knights to break in and slay them. Beirut's situation was apparently desperate, when Sir Anseau de Brie, a loyal supporter of the Ibelins, rode to the rescue. Brie took on all fifteen knights so vigorously that he broke his lance, his sword, and even his dagger. Novare records that “he received so many blows that he could hardly use his hands.”[vi]

Meanwhile, the Lord of Beirut's’ eldest son and heir, a young man only about 22-years-old at this time, had succeeded in setting a portion of the enemy army under Sir Hugh de Gibelet to flight.  Having chased them off the field, he turned back and re-entered the fray with his still large and intact contingent of knights. This charge appears to have been decisive. Novara describes it like this:

“…as soon as his enemies saw and recognized his standards they were afraid and fled towards the city of Nicosia. Sir Balian, who came in advance of all the others, encountered them most eagerly and struck their standard-bearer so hard that he himself fell to the ground, he and his horse falling together; there were many taken and killed, but many escaped due to the fall of Sir Balian.”[vii]

When the dust finally cleared, a bloody field revealed an exceptionally large number of human and equine corpses. The dead included two prominent noblemen: Walter, Lord of Caesarea and former Constable of Cyprus, and Sir Gerard de Montaigu, who had the distinction of being the nephew of both the Master of both the Temple and the Hospital, as well as a nephew of the Archbishop of Nicosia. It was not recorded how Caesarea died, but Montaigu was pinned beneath his horse and evidently crushed.

The dead did not include any of the baillies. All had managed to escape the field. Sir Gauvain de Cheneché took refuge in Kantara, Sir Hugh de Gibelet and the two Amaurys (Barlais and Bethsan) made it to St. Hilarion where they held the king captive. Sir William Rivet appears to have escaped to the port of Kyrenia as he was recorded in Armenia, from whence he sent word to the Emperor requesting aid. He died in Armenia, possibly of wounds incurred at the battle.

The Ibelins had won a great victory and in so doing had re-established themselves on Cyprus. They rewarded their followers with the return of their fiefs, and rescued the women and children who had been frightened into seeking sanctuary with the Knights of Saint John. But they had by no means won the war. King Henry was still held prisoner by three of the baillies, and these held the impregnable fortress of St. Hilarion. The Ibelins were therefore put in the awkward position of laying siege to a castle containing their liege lord and king. See: The Siege of St. Hilarion 1229-1230.

The Battle of Nicosia is a major episode in Rebels against Tyranny.