Baldwin the V is one of the tragic “child kings” of the Middle Ages, similar to Edward VI and other more familiar figures of Western Europe, but perhaps even more deserving of pity.

The Short and Tragic Life 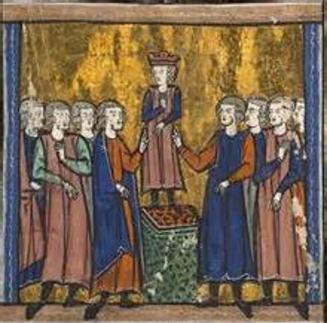 Baldwin was born in August 1177 to Princess Sibylla of Jerusalem. She was the elder sister of the ruling King of Jerusalem, Baldwin IV, who by this time had already been diagnosed with leprosy.  Sibylla was thus the heir apparent to the Kingdom, with the expectation of reigning within a few years due to her brother’s deteriorating and debilitating disease. At the time she gave birth to Baldwin she was a most 17 years old, and already a widow. Her husband, William “Longsword,” Marquis of Montferrat, had died only two months earlier in June, possibly from Malaria. In consequence, her son Baldwin never knew his father.

His mother, being very young herself, does not appear to have taken a strong interest in her child. Certainly, it was imperative for her to find a new husband, as the laws of Jerusalem required a queen to have consort; the precarious security of the Kingdom dictated the need for a ruler capable of leading the feudal armies. No sooner was Sibylla widowed than the search for a new husband began and various names were put forward for her, while she herself appears to have favored a local baron, Baldwin of Ramla and Mirabel — until she met and fell in love with Guy de Lusignan.

There can be little doubt that Sibylla was infatuated with — and throughout her life intensely loyal to — Guy de Lusignan, and this attachment appears to have further weakened her ties to her child by her previous marriage.  Sibylla’s marriage to Guy when she was at most 20 years of age and her son not yet three years old, effectively endangered the boy’s future. Guy de Lusignan had every reason to covet the throne for himself or, at a minimum, want to see his own children wear the crown of Jerusalem; Baldwin V stood in the way of both goals, and so Guy had no reason to look kindly on his step-son.

It appears that Baldwin V was removed from his mother’s care at this stage in his life, if not before. Certainly, two years later, when his uncle King Baldwin IV dismissed Guy as regent, Baldwin was not in his mother’s keeping. On the contrary, while Sibylla was trapped in the Castle of Kerak surrounded by a besieging army led by Saladin, her brother had her son crowned co-King of Jerusalem. Baldwin was just six years old and his coronation was a device to prevent Guy de Lusignan seizing the throne of Jerusalem via Sibylla at the death of the fatally ill Baldwin IV.

For the remaining 16 months of his reign, the dying king sought to have his sister’s marriage to Lusignan annulled, while Baldwin presumably was cared for and educated by men and women who enjoyed the King’s favor. Who these people were is not recorded, but at the death of Baldwin IV the young king, now sole ruler of Jerusalem, was placed under the guardianship of his maternal great-uncle, the titular Count of Edessa, and his kingdom was placed in the hands of a regent, Raymond III of Tripoli.

Edessa was a singularly ineffective, not to say cowardly and selfish, man, whose title was empty: the County of Edessa had fallen to the Saracens in 1144. He distinguished himself by intriguing against the High Court to put his niece illegally on the throne, and then, after the debacle at Hattin, by negotiating the surrender of the rich and defensible of city of Acre without a fight — a completely unnecessary act of cowardice that caused rioting in the streets. His position as guardian of the young king did not arise from concern for the boy’s welfare, but rather the determination of the Count of Tripoli to avoid blame for Baldwin’s death.

This latter fact highlights the fact that by the time his uncle died making him sole King of Jerusalem, Baldwin V was already so sickly that his death was anticipated. The fragile state of his health is underlined by his uncle’s demand that the barons of Jerusalem swear to send an embassy to the Pope, the Holy Roman Emperor and the Kings of England and France begging them to appoint a successor to his eight-year-old nephew. The assumption of everyone seems to have been that he would not live to maturity, let along long enough to have children of his own.

They were right. Baldwin V died in August 1186 just barely nine years old. He had lived all his life as a pawn of the powerful in the kingdom, effectively an orphan, whose closest relative (after his neglectful mother) was a youth dying of leprosy. It is hard to imagine that his short life was a particularly happy one.