Richard I Plantagenet, King of England, is one of those historical figures, who is more legendary than historical. He has been rendered in art in a variety of forms and he generally comes out “larger than life.” Legends of his courage circulated even in his lifetime and soon after his death became even more exaggerated. Richard was seen as the (at least spiritual) descendent of Alexander the Great, Charlemange, and King Arthur.  He was remembered in chivalric romance as the incarnation of chivalry, the perfect royal-knight, as Jean Flori documents extensively in his biography of Richard. (Richard the Lionheart, Jean Flori, Praeger Publishers, 2006.) Richard the Lionheart’s popularity even in popular culture goes back at least to the time of the first Robin Hood legends – whenever that was!

He was, however, as a historical figure, highly controversial even in his own lifetime. He was seen by the Church as excessively proud, greedy and sexual (more on this later). Contemporary clerical chroniclers saw his death as “divine justice” for his sins, and they compared his reign unfavorably with that of his father. Richard was detested by the German Emperor and hated by the French King. He was called “the devil” by his own brother John (not the best person to be calling names, but be that as it may….) On the other hand, there can be little doubt he was adored not only by hard-headed, practical and highly political mother, but also by his troops. Despite the best efforts of his brother John and the King of France, he retained the loyalty of most of his vassals and subjects as well.

Early historians tended to place Richard in the “great” category, but during the Enlightenment, when the crusades were detested as “irrational,” Richard’s reputation among historians started to fade. The famous historian David Hume described Richard as violent, irrational, and excessively passionate. William Stubbs, an important 19th century historian, considered him a “bad ruler.” Sir Stephen Runciman, the most influential historian of the crusades in the early 20th century, called Richard “a bad son, a bad husband and a bad king”.

To this day historians and informed laymen tend to fall into “pro” or “con” camps. It seems as if people can’t be just indifferent to or neutral about Richard.  The main sources of contemporary contention are: 1) whether Richard was a “good” or a “bad” king for England; 2) whether Richard was homosexual or not; 3) whether Richard was a stupid, bloodthirsty brute or an intelligent and judicious nobleman and commander. Obviously, no human being is all good or all bad, and even the advocates of a generally positive or negative view of Richard still concede some points on the opposite side.

In researching Richard Plantagenet for his role in Envoy of Jerusalem, I came to the following personal understanding of this complex and controversial king:

First and foremost, Richard was a product of his age, birth and upbringing. Born a prince to two of the most ambitious, politically savvy, proud and passionate people of the 12th century, Richard had little chance of being humble, meek, dispassionate, indecisive, or easy-going. None of his brothers exhibited particular restraint, humility or benevolence toward their enemies either.  Known even in their own time as “the devil’s brood,” the Plantagenets fought their father and they fought each other as well as their liege lord Philip II and any rebellious vassal for what they perceived as their divine “rights” – their titles, their territory, their castles, their lands.

Richard was, furthermore, only 13 when he was first invested with authority as Duke of Aquitaine. While children in the Middle Ages undoubtedly grew up faster than children do today, that is still a very young age to be raised to such high status. It is hard to imagine that the dignity, power and importance of this title did not go to his head.

Certainly, Richard identified with Aquitaine far more powerfully and emotionally than he ever did with England or Normandy. He spent almost no time in England as a child, and not until the death of his elder brother Henry the Young in 1183 die he expect to become King of England.  Even then, his father kept him guessing about whether he would be recognized as heir or not. It was literally not until his father died in 1189 that Richard had a bond with England. By then he was 32 years old and had already taken the cross. In short, his mind was focused elsewhere. So, no, he neither spent much time in nor cared particularly about England. But that does not necessarily make him a “bad” king. Indeed, it was not until the 18th century that the English “disowned” him. Throughout the Middle Ages, Richard was revered as one of England’s greatest kings, as a king who made England proud because his glorious reputation reflected well upon his kingdom and subjects.

Another thing I learned was that Richard’s relationship with his father was far more complex than that of an impatient and rebellious son. From 1173 to 1183, Richard and his father fought almost continuously together – against the French King, against the rebellious lords of Aquitaine, against Richard’s brothers. They were allied again 1184 – 1187. I hypothesize that the bitterness of the final break that led indeed to Richard hounding his father to his grave was a function of the intensity of Richard’s love for his father. Richard felt betrayed by a man he had come to love and it was this which turned love into hatred.

It is also unquestionable that Richard loved his mother deeply. He had been with her at her court in Poitiers from the ages of nine to thirteen. As Duke of Aquitaine he identified with her and her heritage. He surrendered the Aquitaine to her and her alone, trusting her not to give it to one of his brothers. His very first act as king was to order her release from detention. He sought her advice when he was with her and entrusted her with royal authority during his absence. Arguably there was no other human being that he trusted as much as he trusted his mother, and rightly so. She, more than anyone, held his kingdom together in the face of rebellions and secured his release from German captivity.

But Richard was anything but a “mama’s boy.” He was strong, athletic, and comradely. He won the affection of his troops because he could swear, fight and whore as hard as they did. Indeed, the Church was highly critical of his sexual excesses. It has become popular to impute homosexuality to Richard, but there is no evidence that he was suspected of this in his own time. Certainly, he had mistresses and at least one illegitimate son, so if he was also a practicing homosexual he was bi-sexual. We will probably never know what his sexual preferences were and, frankly, I don’t much care.

What did strike me as exceptional, however, was his willingness to do manual labor. This was anything but self-evident in a medieval nobleman, much less a king. Yet the Itinerarium Peregrinorum et Gesta Regis Ricardi claims that Richard helped rebuild the defenses of Ascalon “with his own hands,” and describes his example inspiring everyone to work together handing the stones up to the wall (Book 5, Chapter 6). The willingness to do menial labor reveals just how sure Richard felt in his own skin. He was so sure of his own innate nobility that he had no need of royal symbols or ceremony. It was perhaps this that enabled him to endure captivity at the hands of the Holy Roman Emperor.

I was also impressed with Richard’s financial savvy. His willingness to invent new means of raising revenues when preparing for the crusade would not have disgraced an investment banker in the 1980s. His astute sale of the Island of Cyprus to the (rich and financially liquid) Knights Templar, thereby refilling his own coffers while securing the strategic objective of ensuring Latin control of this strategically vital island was a stroke of genius. His re-sale of the island to Guy de Lusignan was almost equally shrewd, again giving him resources while also easing a delicate political issue: what to do with a deposed king, who has been your client.

Finally, I was won over by Richard’s leadership style. Richard was a brilliant strategist – who also led from the front. He risked his own life, but was very cautious with the lives of his soldiers. He understood logistics as well as strategy, and he won his battles with a combination of careful planning and sheer audacity. As one of my readers put it, in the end, I just had to love Richard.

Richard the Lionheart is a central figure in Envoy of Jerusalem, where I have attempted to do justice to him as well as highlight the "clash of culture" between crusaders such as Richard and the natives of Outremer such as Balian d'Ibelin. 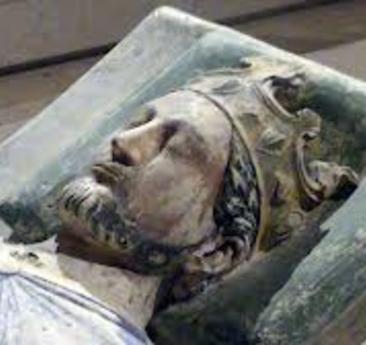