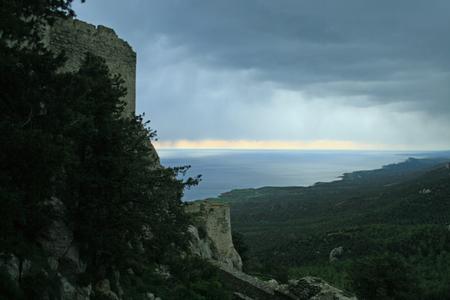 There is no historical evidence that Richard Lionheart planned to conquer the Byzantine island of Cyprus when he set out on the Third Crusade. On the contrary, every indication suggests that he was intent upon reaching the Holy Land as expeditiously as possible and re-capturing Jerusalem for Christendom. Had there been no storm, he would have proceeded, as his fellow-crusader Philip II of France had done, without interruption all the way to Tyre/Acre. Only chance had scattered his fleet, wrecked some of his ships on the shores of Cyprus and left his fiancé and sister stranded there.  Yet even that would not have resulted in a conquest had the ruler of Cyprus, the self-styled Emperor Isaac Comnenus, acted hospitably to Richard’s ship-wrecked men and ladies. Instead, Isaac plundered the ships, imprisoned the survivors, threatened the royal women, and insulted Richard himself (see The Conquest of Cyprus I: Chance and Passion). Richard’s response was to teach the Byzantine tyrant a lesson, which he did by storming ashore, capturing Limassol and then scattering Isaac’s army in a dawn attack. It all would have ended there if only Isaac had been willing to come on crusade with Richard. Instead, he fled to the interior.

Richard responded not with rage but with hard-headed rationality. It was at this point that he appears to have conceived the intention of taking Cyprus from Isaac Comnenus. He rapidly developed and executed a well-crafted strategic plan that made effective use of his large crusader force and fleet. First, he divided his army into three parts. He sent troops to pursue and if possible capture Isaac under the command of Guy de Lusignan (who had landed on the island from the siege at Acre to beg Richard to join the siege in all haste). He sent part of his fleet to the west and took the bulk of the fleet eastward. Both parts of the fleet secured ports and castles along the coast as they advanced.

The latter continued to be easy and bloodless due to the unpopularity Isaac. Even before he left Limassol, Richard had been receiving homage from many of the local elite, most notably the Italian merchants. But it wasn’t only the foreigners that evidently welcomed Richard. Many of the Byzantine nobility also appeared to prefer Richard to Isaac — perhaps because they believed he would not stay long and they would soon have the island to themselves.

Meanwhile, at Famagusta Richard disembarked his troops and made for the inland city of Nicosia. Expecting an ambush, Richard personally commanded the rear-guard of his army. Isaac obliged, attacked and his army was handily defeated yet again by Richard’s superior troops and leadership. Isaac himself, however, escaped as he had on all the previous occasions, and this time he fled to one of the nearly impregnable mountain fortresses, either Kantara or Buffavento.

These castles, perched on the top of a steep, rocky corniche so narrow that it was not possible to build courtyards or wide halls, could be held with very small garrisons. Attackers had to climb near vertical slopes to reach them, continuously under fire by the defenders — or starve the defenders out with a siege. While a siege was by far the more rational military solution, sieges take time, and that was what Richard of England did not have. Isaac Comnenus clearly expected Richard to give up, continue with his crusade, and leave him to re-take his island at leisure.

Isaac might even have gotten away with it if Richard’s fleet (the part that had sailed west and reached the northern shore of the island) had not in combination with the forces under Guy de Lusignan captured the coastal city and castle of Kyrenia.  (This is, as far as I can see the one and only time Guy de Lusignan ever did anything useful for the cause of the Holy Land!) As chance would have it, Isaac’s only child, a girl, was in Kyrenia.

The girl has remained nameless throughout history, referred to only as the “Maid of Cyprus” or as her father’s daughter. Fortunately for the crusader cause, her father, despite all his other faults, loved her. He loved her so much that despite his comparatively secure position in an all-but-unassailable castle, he abjectly surrendered on June 1. Isaac set only one condition: that he not be put in irons. According to legend, Richard of England agreed, only to have fetters made of silver for him.

If Isaac’s hope had been that surrender would enable him to be reunited with his daughter, it was a short-lived reunion. Isaac was handed over to the Hospitallers, who kept him in a dungeon in Marqub (Syria) until 1193 or 1194. The year after his release he was allegedly poisoned for trying to incite the Sultan of Konya to attack the Byzantine Empire. He was dead by 1196. As for his daughter, she was turned over to the care of Richard’s bride and sister and sailed with them first to Palestine and later to Europe. She was used (just like his sister Joanna) as a diplomatic pawn by Richard, and eventually married to an illegitimate son of the Count of Flanders. (During the Fourth Crusade the couple tried to lay claim to Cyprus, but were rapidly sent packing without anyone taking them seriously.)

Thus, in less than a month and with the loss of only two men (according to the contemporary sources), Richard the Lionheart had taken complete control of the rich and strategically important island of Cyprus.   The port of Famagusta is only 118 miles from Tripoli, the closest of the crusader cities, and just 165 miles from Acre.  On a clear day, it is possible to see the coast of Lebanon from Cyprus. Furthermore, Cyprus was a fertile island capable of producing grain, sugar, olives, wine and citrus fruits in abundance.  Its location made it an ideal staging place for future crusades and a strong base for ships to interdict any Saracen fleets intent on preying on the coast of the Levant. Cyrpus was thus both a bread-basket and a military base for the existing crusader states.

Richard of England had profited immensely from his conquest. In addition to the plunder he took on the battlefield (that included rich tents, gold plate and armor according to tradition) he had also captured Isaac Comnenus’ treasury. He also extracted a tax from the lords and burghers of Cyprus. All this replenished his own coffers and enabled him to pursue the crusade with sufficient resources to buy men and materiel as needed. He was not, however, interested in retaining control of the island indefinitely. It was too far from home (Aquitaine). That Richard’s goal in capturing Cyprus was purely strategic (not dynastic) and intended to strengthen the position of the Christian kingdom’s there is evidenced by the fact that he soon sold the island (thereby further strengthening his financial position) to the Knights Templar for 100,000 pieces of gold. See: Templar Rule on Cyprus

The Conquest of Cyprus II: Calculation and Politics