Courts for an Ethnically Diverse Population 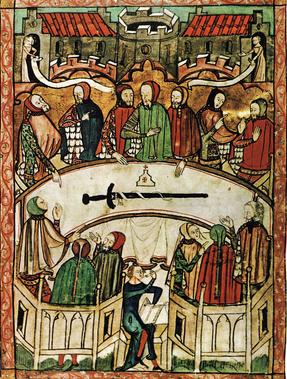 Arguably the most fundamental function of any state is the administration of justice. It is when a government fails to deliver justice that it loses its legitimacy, and either becomes tyrannical or starts to disintegrate into anarchy. This is what makes the study of legal systems so essential to the understanding and assessment of the legitimacy and efficacy of any government. The legal system in the Kingdom of Jerusalem is no exception.

Fundamental to an effective system of justice is that the participants accept and recognize the legitimacy of the legal authorities. This is notoriously difficult when the administrators of justice speak a different language, have a different faith, or follow different legal traditions from the subjects of the legal system. As a result, the imposition of law by an invading force is inherently challenging, and wise conquerors have generally been cautious about replacing local law and custom with their own system.

The Kingdom of Jerusalem faced a particularly daunting challenge, because from its inception the Kingdom of Jerusalem was a multi-ethnic, multi-lingual and religiously diverse state.  Quite aside from the new comers from Western Europe, the native population of the Holy Land was already polyglot and non-homogeneous when the men of the First Crusade arrived. There were, for example, still Jews living in the Holy Land, although their numbers were comparatively small, a large portion of the native population had converted to Islam at some point in the more than four hundred years since the first Arab invasion. However, often forgotten by modern commentators, the majority of the population was composed of Orthodox Christians. These, in turn were composed not only of Syrian Orthodox Christians (both Maronite and Jacobite), but also Greek, Armenian, Coptic and even Ethiopian Orthodox communities.

The rulers of the crusader states responded intelligently to the challenge confronting them by allowing a network of partially over-lapping local courts (in the vernacular) to continue, while adding two additional courts for the newcomers, the High Court (see separate entry) and the Low Court.  They then followed the overriding principle of judgement by one’s peers, supplemented by two corollary principles: that in disputes between individuals from different strata of society, the case should be tried before the peers of the weaker (lower) person, and in cases between individuals from different ethnic groups of the same strata, the case should be brought before the peers of the defendant.

The practical outcome of this theoretical approach is that in all matters of family and religious law, the residents of the crusader states sought resolution from the religious authorities of their respective religion whether Islam, Judaism, one of the many forms of Orthodoxy, or before Latin Christian (Catholic) ecclesiastical courts. In rural areas, furthermore, civil and criminal cases not involving a Frank were tried before local/native judges in accordance with the laws and customs predating the First Crusade.

In urban areas, however, the intermingling of peoples was too great to allow such a simple rule, and the Cour de la Fond evolved for the resolution of commercial cases and the Cour de la Chaine evolved for the resolution of maritime disputes. In each, a representative of the lord presided over the court as “bailli,” but did not rule on a case. Rather, the case was tried by six jurors drawn from the same class of the parties to the dispute. So, for example, in the Cour de la Chaine, the jurors had to be sailors or merchants. Of these, two were Franks and four natives, a ratio that clearly favored the Franks on a national scale, but may have roughly reflected the composition of urban populations because a large portion of new immigrants were city dwellers, and, correspondingly, a larger portion of the rural population was native.

However, there was an exception to the jurisdiction of these court, which again recognized the diversity of the population: the independent “communes” or urban colonies of the Italian city states were granted the right rule on cases involving their own members in accordance to their own laws and before their own courts. Thus two Venetians would be tried by the laws of Venice, and Pisans by the laws of Pisa etc. Disputes between members of different communes, however, would be tried in the courts of the defendant.

During the first century of the crusader states, however, the communes were a comparatively small minority and the bulk of the Frankish population was drawn from all across Western Europe from Norway to Sicily. These residents of the crusader states were Westerners, whose common language was Latin/French, and making them subject to the local Syrian courts would have been illogical and unacceptable.  Instead, a new court, the Cour des Bourgeois, or Low Court, was created to address criminal and civil cases involving non-noble Franks that did not fall within the jurisdiction of the commercial or maritime courts. Although often translated into English as the Low Court, the Cour de Bourgeois was the only court for disputes involving burghers or bourgeois residents. The High Court was not an appellate court; it was the court for disputes between members of the feudal elite, i.e. knights, nobles, and vassals of the king.

In the Cour de Bourgeois cases were tried before a “viscount” appointed by the local lord (e.g. the King in royal domains, the Prince of Galilee in Galilee, the Count of Jaffa in Jaffa and Ascalon, the Lord of Oultrejourdain, Ibelin, Sidon etc. in their respective baronies), and twelve jurors. The viscount like the baillis of the other courts did not have a say in the verdict or sentence but was charged with ensuring due process, maintaining order in the courtroom, and enforcing the sentences pronounced by the jurors.

Interestingly, the various Cour de Bourgeois met more regularly than the High Court, presumably because they had more business to conduct given the larger numbers of burgers compared to nobles. Another striking feature of these courts was the right of the litigants to request “counsel” from the court. If requested (and it was highly recommended by the medieval commentators!), the court appointed one of the jurors, who thereafter did not sit in judgement of the case but became an advocate, much like a court-appointed lawyer today. Furthermore, although there was not yet a profession known as “lawyers,” men who gained a reputation for understanding the law were revered and repeatedly appointed either as jurors or counsellors. The names of some have come down to us, such as John d’Ibelin, and Philip of Novare, because they were also legal scholars, who wrote legal tracts about the laws they were interpreting. There was, however, no such thing as the “prosecution.” The state as such had not yet assumed the role of pursuing justice and punishing crime for itself. Instead, someone had to bring a case to trial by accusing another person of a violation of the law.

Somewhat alienating to modern sensibilities, trial by combat or some other form of “test” (fire or water) were the preferred means of determining guilt and innocence. But this was normal in this period and accepted by litigant and defendant alike.