Popular Misconceptions about the Crusades: A Rebuttal 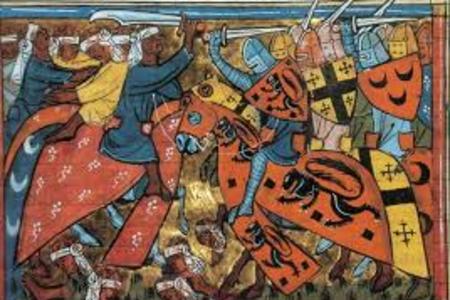 Many popular misconceptions about the crusades abound today in the media -- such as blaming the rise of the Islamic State on the alleged "atrocities" and "aggression" of the crusaders, or lumping "the crusades" together with the holocaust as some of the worst crimes against humanity in human history. I offer, therefore, a concise rebuttal of common myths as a prologue to a discussion of the history of the crusader kingdoms.

1. The crusades were not an act of genocide. There were battles and sieges, but at NO time was the extermination of any ethnic or religious group the policy or goal of the crusades.

2. The crusades were not wars of aggression. They were a response to over four hundred years of Muslim aggression in which invading Muslim armies had threatened Constantinople and nearly reached the Loire.

3. The crusades were not an invasion of traditionally Muslim territory. The Holy Land had been the home of Christianity since Christ himself, and Christianity had become the official and dominant religion by the end of the 4th Century. At least 50% of the population of the Holy Land was still Christian when the first crusaders arrived.

4. The crusades were not wars of religious conversion. There was no attempt to force the Muslim population in the crusader states established by the First Crusade to convert to Christianity. The Church explicitly condemned forced conversions, and secular authorities found it convenient to tax non-Christians at a higher rate.

5. Except for the First, and to a lesser extend the Third and Sixth Crusades, the Christians LOST all the crusades, and were driven out of the Holy Land in a long series of brutal, bloody campaigns in which the Mamelukes repeatedly slaughtered civilians, broke truces, failed to keep their word and enslaved thousands of civilians. The last crusader foothold in the Holy Land was lost in 1291 with the fall of Acre. In short, there is no need for modern Islam to revenge the crusades--they did that very effectively and brutally in the late 13th century.

Modern apologists for ISIL, however, are obsessed with pointing to the atrocities and injustices allegedly committed by the crusaders, while excusing, dismissing or simply ignoring the atrocities perpetrated by their contemporary opponents. This narrative is apparently motivated by the naïve hope that if we “confess” our “guilt” we can somehow deflect or weaken the hatred directed against us.  Or perhaps it is motivated by a desire to demonstrate the superiority of our “enlightened” standpoint over the “bigotry” of our enemy?

Whatever the reason, most modern references to the “barbarism” of the crusaders and the “atrocities” they committed are little more than rhetoric, yet they draw their inspiration from two "facts" that have been repeated so often that most people don't know the source but accept them unthinking.

First, the Greek historian Anna Comnena used the term “barbarian” to describe the participants of the First Crusade, and second, after finally taking Jerusalem by storm in 1099, the crusaders sacked the Holy City and massacred the garrison.

Now, it must be remembered that the Greeks used the term “barbarian” to refer to anyone who didn’t speak Greek. This included, in a different age, the highly civilized Persians, Babylonians, Egyptians etc. Second, the Greek Emperors considered themselves the descendants and heirs to the Roman Empire—and viewed the German, French, and Norman crusaders as the descendants of the “barbarian hordes” that had over-run the Western Empire.

Furthermore, because the Byzantine Empire preserved greater continuity with Rome, it also had a very sophisticated bureaucracy and hierarchy that left the Byzantines confused and offended by the lack of formalized command structures among the crusaders. Indeed, the complete absence of a supreme commander among the crusaders was utterly incomprehensible to a society in which the Emperor was an absolute autocrat. Thus, Anna Comnena certainly saw the crusaders as barbarians, but that does not mean that we should. The lack of understanding for a different culture exhibited by the Byzantine chroniclers does not mean that that other culture was inherently inferior. Modern readers — particularly enlightened, tolerant modern readers — ought to appreciate and recognize that fact.

The sack of Jerusalem, on the other hand, was unquestionably a barbaric act — from the modern perspective. It was hardly so in the eyes of contemporaries. The contemporary rules of war were clear and universally accepted: a city that surrendered could expect mercy, a city that did not could expect “to be put to the sword.” This had been the rule of war at least since the sack of Troy.

Modern sensibilities are offended particularly by the fact that Christians, allegedly fighting in the name of a peaceful, forgiving and loving Christ, could commit this “atrocity.” The fact that they did commit this act of bloodshed may be evidence that the medieval understanding of Christianity and our own diverges somewhat — but that would ignore the very sophisticated and centuries-long discussions about the nature of “just wars” and the complex theological debates about the justifications for the crusades themselves. Far more likely, by the time the crusaders at last reached Jerusalem after horrendous suffering and huge losses, they were simply not willing to curb their baser instincts -- even in such a sacred place.

Yet this does not make the crusaders “barbarians” in the contemporary context, certainly not when it is clear that most apocalyptic descriptions of the sack are exaggerations and that thousands of Jerusalem’s inhabitants survived. Nor was this in any way an exceptional atrocity, much less justify modern-day atrocities against innocent and unarmed populations inside the Islamic State, or against unarmed civilians in terrorist attacks around the world.