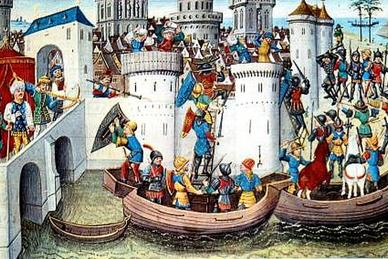 The loss of Jerusalem to Saladin in 1187 inevitably altered the dynamics of crusading in the following century. Saladin had proved that the Christian kingdoms were vulnerable, and this made it easier for subsequent Muslim leaders to inspire to their followers with religious zeal. Meanwhile, in the West, crusaders and crusading had lost the aura of invincibility. Men increasingly doubted God’s Will when it came to the crusades. But the process was slow. Five more crusades – or six depending on how one counts – occurred before the last outpost of Outremer fell to the Saracens in 1291. (It is important to remember that the numbering of crusades is a historical convenience and completely anachronistic. No one in medieval times talked about "crusades" at all, much less referred to specific campaigns by set numbers.)

The first of the crusades that followed the fall of Jerusalem was, of course, the Third Crusade that achieved sufficient success to  make the crusader states viable for nearly a hundred years -- but it failed to recapture Jerusalem, so in 1198, when the crusaders had hardly returned, Pope Innocent III began preaching a new crusade.

Enthusiasm for this crusade was notably diminished compared to the three earlier ones. No king, nor any important nobleman, was prepared to lead it, and financing was so short that when the crusaders reached the port of embarkation, Venice, they were unable to pay for transport. The Venetians offered to provide the shipping for “free” – in exchange for crusader help in eliminating their (Christian) commercial rival, the city of Zara. Over the vehement protest of many participants -- and the Pope! -- and after much soul-searching, the crusade’s commanders agreed to do Venice’s dirty work, but a number of crusaders refused to follow their leaders and proceeded independently to the Kingdom of Jerusalem to offer their services there.

Following the capture of Zara, however, the crusaders still lacked the resources to sail for Egypt and their proposed crusade. They were no closer to recapturing Jerusalem than before they embarked. Furthermore, they had been excommunicated by the Pope for attacking a Christian city and pursuing material gain when under crusader vows. Many men abandoned the army altogether, the wealthy traveling independently to the Kingdom of Jerusalem to take up the struggle for Jerusalem as individual armed pilgrims rather than as part of a crusading army.

It was now, however, that the son of a deposed Byzantine Emperor, sought their aid. Alexios Angelos alleged that he would be welcomed with jubilation by the people of Constantinople and offering huge rewards. The crusaders succeeded in putting Alexios on the Byzantine throne in August 1203, but his promises of pay proved empty. Worse, he was highly unpopular and deposed in a popular upraising in January 1204 -- an uprising that was directed against the Latins still camped outside the city.

There was now no hope the crusaders would be unpaid for their services and they were in worse straights than ever. At this juncture, Venice proposed taking the wealthy city of Constantinople on their own account..

It was a daring plan. The crusaders were few in number, and morale was low. On the other side was a city that had defied all attempts to capture it up to now. Twice, massive armies led by devout (not to say fanatical) Muslim leaders had failed to take the city after months-long sieges.

The crusader victory is largely attributable to the remarkable technology of the Venetian ships which enabled an assault from the sea -- something the Arabs had not been able to do. Equally important, however, is the fact that the mob in Constantinople did not elect a new emperor until the very day before the city fell. This suggests the population was divided and that there was no clear leadership of the defense. The great city fell to the crusaders on April 13, 1204, and the erstwhile crusaders captured and sacked one of the greatest Christian cities in the world.

Although this action was repudiated by the Pope and reviled by many devout Christians throughout Western Europe, the damage had been done. The reputation of so-called "crusaders" was besmirched forever -- and the "Fourth Crusade" is always held up as an example of the corruption of the entire concept by opponents. Yet the capture of Constantinople was not a crusade at all! The Pope had very explicitly prohibited the siege and capture of Constantinople and papal approval is the essence of a crusade. It is only a historical convention to refer to this hijacked crusade as the "Fourth Crusade."