True Tales of the Knights Templar: Battle of Montgisard 1177

A modern portrayal of the Battle of Montgisard by Mariusz Kozik

In in 1177, Salah-ad-Din (known in the West as Saladin) launched the first of what were to be several full-scale invasions of the Christian Kingdom of Jerusalem. At this time Saladin had effectively united the Caliphates of Cairo and Baghdad for the first time in 200 years, but his hold on power was still precarious. In Egypt his faced suspicion and opposition because he was Sunni, and in Syria he was viewed as a usurper and upstart because he was a Kurd and had stolen the Sultanate from the rightful heir.

Saladin countered these internal doubts and dissatisfaction with the age-old device of focusing attention on an external enemy: the Christian states established by the crusaders along the eastern shore of the Mediterranean. These states represented a clear and serious military threat to his lines of communication between Egypt and Syria.  But Saladin did not simply beat the drum of alarm concerning an external enemy in order to rally his subjects around him; he also took up the cry of “jihad” — Holy War. This was a obvious attempt to increase his stature vis-a-vis his remaining rivals in Syria. Salah-ad-Din means “righteousness of the faith,” and throughout his career Salah-ad-Din used campaigns against the Christian states as a means of rallying support.

Meanwhile, in the Kingdom of Jerusalem, King Amalaric, who had been led five expeditions into Egypt, had died.  He had been succeeded by Baldwin IV, a youth suffering from leprosy. Conscious of his own weakness and immanent death, Baldwin IV sent to the West for aid, and in early August 1177, Count Philip of Flanders reached Acre with a large force of Western knights.

On the advice of the High Court, Baldwin IV offered Philip of Flanders the regency of his kingdom, whose armies were preparing yet another invasion of Egypt aided by a large Byzantine fleet. Flanders, however, insisted on being made king of any territories the joint Christian forces conquered. The idea did not sit well with either the King of Jerusalem or the Emperor of the Eastern Roman Empire, both of whom were footing the bill and providing the bulk of the troops for the expedition. The result was that the entire expedition was called off, the Byzantine fleet withdrew and Philip of Flanders took his knights and half the barons of Jerusalem north to attack the Seljuk strongholds of Hama and Harim instead.

Salah ad-Din had gathered his forces in Egypt to repel the impending attack. He rapidly learned that not only had the invasion of Egypt been called off, the Byzantine fleet had withdrawn and the bulk of the fighting forces of Jerusalem had moved north. It was a splendid opportunity to strike, and the Sultan seized the opportunity, invading with a force estimated at 26,000 light horse — which leaves open the question of whether there were infantry with him or not. The force also allegedly included some 1,000 mamluks of the Sultan’s personal body guard.

Salah ad-Din's army crossed into Frankish territory from Egypt and significantly by-passed the Templar stronghold at Gaza. Presumably, Salah ad-Din considered it too tough a nut to crack. Laying siege to a Templar fortress would, he calculated, cost far too much time and too many lives. Salah ad-Din (as throughout his career) preferred "soft targets.

Significantly, the Templars let the Saracen army pass without offering any resistance. The Templars were said to have gathered a large fighting force at Gaza, thinking this would be the target of the invasion. (Howarth, p. 132; Robinson, p. 131.)  Furthermore, the Master of the Temple had taken personal command at Gaza in anticipation of this confrontation.  The new Master was Odo de Saint Amand. He was a man William of Tyre (who knew him personally) described as "dictated by the spirit of pride, of which he had an excess." (Barber, p. 109.) Two years later, Saint Amand would be responsible for a Templar charge that very nearly cost the Kingdom of Jerusalem their king, and landed him in a Saracen prison. So it is unlikely that the Templars failed to respond to Salah ad-Din's invasion out of indifference or fear. Furthermore, as my essay on the Siege of Ascalon highlighted, the Templars were capable of impetuous acts in which they took on forces much larger than their own. The most likely explanation is that despite an ethos that viewed numbers as irrelevant in the face of faith, the size of the invading army was simply too daunting for the roughly 300 knights collected at Gaza.

Meanwhile, according to an anonymous Christian chronicler from northern Syria, the news of Saladin’s invasion plunged Jerusalem into despair. The king was just 16 years old, had no battle experience of his own. His most experienced commanders (or many of them) were besieging Hama. The Constable of the Kingdom, the competent and wise Humphrey de Toron II, was gravely ill. Nevertheless, Baldwin rallied his forces and with just 376 knights made a dash to Ascalon, the southern-most stronghold of his kingdom.

Baldwin and his improvised force of secular knights arrived in Ascalon only shortly before Salah ad-Din with his whole army on November 22.  King Baldwin took control of the city, but then hesitated to risk open battle with the Saracens because of the imbalance of forces.  Thus, while King Baldwin's dash to Ascalon had been heroic, it had been rash as well. Salah ad-Din was now in a position to keep the King and his knights bottled up inside Ascalon with only a fraction of his forces, while taking the rest of his army and striking at the now unprotected Jerusalem

This was exactly what Salah ad-Din did, and it might have resulted in the fall of Jerusalem had Salah ad-Din not made a major error. The Sultan and his emirs were so confident of victory that they took time to plunder the rich cities of the coastal plain, notably Ramla and Lydda, but also as far inland as Hebron. In Jerusalem, the terrified population sought refuge in the Citadel of David.

But Baldwin IV was not yet defeated. With the number of Saracen troops surrounding Ascalon dramatically reduced, he risked a sortie. H also somehow managed to get word to the Templars at Gaza of his plans and request that they rendezvous with him.

The Templars were not vassals of the King of Jerusalem and not obliged to do as he asked. But Saint Amand did not hesitate to join the King.  He sortied out of Gaza with his entire mobile force of just 84 knights, plus an unknown number of sergeants and Turcopoles.

Together this mounted force started to shadow Saladin’s now dispersed and no longer disciplined army. Frankish tactics, however, required a combination of cavalry and infantry, so King Baldwin could not engage the enemy until he had sufficient infantry as well. He issued the arrière ban, a general call to arms that obligated every Christian to rally to the royal standard in defense of the realm. Infantry started streaming to join him.

On the afternoon of November 25, King Baldwin’s host of about 450 knights (375 secular knights and 84 Templars from Gaza), with their squires, Turcopoles and infantry in unspecified numbers caught up with the main body of Saladin’s troops at a place near Montgisard or Tell Jazar, near Ibelin (modern day Yavne).

The Sultan, as he later admitted to Saracen chroniclers, was caught off-guard. Before he could properly deploy his troops, the main force of Christian knights, probably led by Templars, smashed into Saladin’s still disorganized troops, apparently while some were still crossing or watering their horses in a stream.

Although the battle was hard fought and there were heavy Christian casualties, the Sultan’s forces were soon routed.  Not only that, Salah ad-Din himself came very close to being killed or captured and allegedly escaped on the back of a pack-camel.

For the bulk of his army there was no escape. Those who were not slaughtered immediately on the field, found themselves scattered and virtually defenseless in enemy territory. Although they abandoned their plunder, it was still a long way home — and the rains had set in.  Cold, wet, slowed down by the mud, no longer benefiting from the strength of numbers, they were easy prey for the residents and settlers of the Kingdom of Jerusalem.  The latter, after the sack of Lydda, Ramla and other lesser places, had good reason to crave revenge. Furthermore, even after escaping Christian territory, the Sultan’s troops still found no refuge because once in the desert the Bedouins took advantage of the situation to enslave as many men as they could catch in order to enrich themselves. Very few men of the Sultan’s army made it home to safety in Egypt.

Saladin was badly shaken by this defeat. He had good reason to believe it would discredit him and initially feared it would trigger revolts against his rule. Later, he convinced himself that God had spared him for a purpose. Certainly he was to learn from his defeat. He never again allowed himself to be duped by his own over-confidence and his subsequent campaigns against the crusader states were marked by greater caution. It was not until the crushing defeat of the Frankish armies at Hattin in July 1187 — almost ten years later — that he had his revenge not just on the Frankish kingdom but specifically on the Knights Templar as well.

The Battle of Montgisard is an important episode in "Knight of Jerusalem," the first book in a three part biography of Balian d'Ibelin. 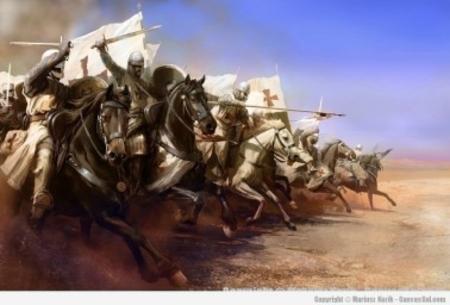 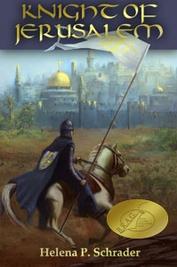