Diplomacy of the Third Crusade 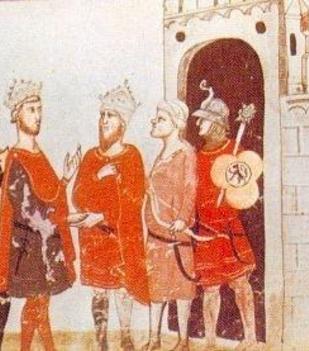 The Third Crusade was the first -- but not the last -- crusade to end with a truce, meaning it was ended by diplomatic rather than military  means. It is therefore an interesting case-study in diplomacy at the interface between Christendom and the Dar al-Islam. It is particularly interesting because the principle actors, Richard the Lionheart and Salah al-Din, are more famous as men of war then men of peace. The last entry looked at the 1191 and the opening diplomatic moves, including the absurd offer by al-Adil to marry Richard's sister Joanna. Today’s entry looks at diplomacy in 1192 that led to the conclusion of a successful truce, the Treaty of Ramla, in early September.

As the year 1192 dawned (cold, bleak and snowy for the crusaders huddling outside Jerusalem), Richard of England faced the unpleasant task of convincing his exhausted army to withdraw back to the coast of Palestine. The advance on Jerusalem had been made against his better judgment because the bulk of the crusaders were motivated by sincere religious zeal to free Jerusalem from Muslim rule.

Richard the Lionheart as a seasoned military commander, on the other hand, had rapidly recognized what the military orders and the local barons had pointed out: that the force he had was 1) unlikely to take Jerusalem by storm against a determined, well-supplied and well-lead defense (such as Saladin had at hand), and 2) wholly inadequate to re-establish Christian control over Jerusalem for an extended period, even if they did take it. The Itinerarium Peregrinorum et Gesta Regis Ricardi put it this way: "...[Jerusalem] could not have been held for long, because when the pilgrimage was completed the people would have gone home and there would not have been anyone left who could defend it."

On or about January 10, 1192, a council composed of representatives from all the contingents of the crusading army was persuaded by the arguments of the militant orders and the native barons that an assault on Jerusalem at this point was pointless. A much-demoralized crusader army riven by rivalries between the French and Richard's vassals withdrew back to the coast. Here Richard led his army to the coastal city of Ascalon, whose defenses had been torn down when Saladin evacuated and abandoned it the previous fall.

The significance of Ascalon was that it lay on Saladin's lines of communication and supply between Egypt and Syria. Throughout his reign, Saladin depended primarily upon Egyptian wealth to support his ambitious campaigns against both his Muslim rivals and the crusader states. If Ascalon was in Frankish hands, could be used for as a base for interdicting Saladin's supplies.

But Richard by this point was thinking even farther: he saw Ascalon as a staging ground for an assault on Cairo itself. His reasoning was simple. Jerusalem was economically insignificant and religiously only of secondary interest to Islam, whose holy cities were Mecca and Medina. Cairo, on the other hand, was Saladin's treasury and power-base. In short, Saladin lost little more than prestige if he gave up Jerusalem, but he would likely lose his throne if he lost Cairo. Richard calculated that if he threatened Cairo (note, he didn't even have to capture it), Saladin would be forced to withdraw from Jerusalem. At that point, seeing that his own resources were not infinite, Richard was probably banking on a diplomatic solution: Richard expected to force Saladin to recognize the right of Christian rule over Jerusalem by treaty. That this was not a far-fetched idea was demonstrated by later crusades (5th and 6th) in which Muslim leaders indeed offered to surrender Jerusalem during negotiations.

The plan, however, came to naught because at this point the latent tensions between Richard and the large contingent of French crusaders led by the Duke of Burgundy after King Philip's departure deserted him. The French returned to Acre, leaving Richard's army to gutted to conduct offensive operations. Furthermore, it was while Richard was at Ascalon that word reached him of his brother John's revolt against him. His chancellor and justicars in England begged him to return to England, while the news that Philip of France was preparing to prey upon his continental possessions added further urgency to his return.

Nevertheless, Richard was persuaded to remain in the Holy Land long enough for another assault on Jerusalem, although none of the essential facts had changed. The advance was duly made and again ended short of its goal. Again the army withdrew back to the coast without having achieved the objective of the crusade: the liberation of Jerusalem.

Notably, throughout this period (January to July, 1192) we hear of no efforts on the part of either Richard or Saladin to seek a diplomatic solution. The reason seems clear: the Franks were steadily losing strength. Not only had they been forced to withdraw from Jerusalem twice, Saladin would have been well informed about the dissension within the crusader camp -- and about the dire situation in Richard's lands. Saladin had no reason to negotiate since he had every reason to expect he could win without a major battle or concessions at the negotiating table. Saladin had time on his side. He was winning and he knew it.

Richard knew it too, and it was at this juncture that he tried to re-open negotiations with Saladin. He sent word to Saladin's brother that he was ready to consider a truce recognizing the status quo until such time as he could return with a fresh army to resume the crusade. The Sultan had no reason to agree to these terms, but he revealed how right Richard's reasoning on Cairo had been by insisting that first Ascalon be razed to the ground.

Clearly, Richard needed another military victory in order to bring Saladin to the negotiating table. Since the strategic goal was beyond reach with the resources he could command, he sought a tactical victory that was both obtainable and valuable, even if more limited in scope; he started to prepare the capture of the coast north of Tyre. This plan was intended to strengthen the viability of the remaining crusader states, by re-establishing contiguous Frankish control over the coast from Ascalon to Tripoli and beyond to the Principality of Antioch. The importance of this was that it enabling them to last long enough for the West to muster, equip and launch a new crusading army at a later date.   increased the probability that the crusader states would survive long enough for a new crusading army to be raised, equipped and sent from the West. Richard was already talking about bringing a new army to the Holy Land -- just as soon as he'd taught his younger brother and Philip of France a lesson at home.

Before he could carry out even his modest tactical campaign, however, Saladin struck in his rear. The Sultan's army seized control of the vitally important city of Jaffa. Richard the Lionheart, the remnants of his crusading force and the fragile crusader states were once again on the defensive. He Richard rushed back to Jaffa with just a handful of troops, while the army of Jerusalem started down the coastal road to the relief of Jaffa. In two separate engagements, Richard the Lionheart managed to not only secure Jaffa for the Franks but to humiliate Saladin and demoralize his entire army.

Now, and only now, was Saladin was willing to negotiate in earnest. Richard this time selected one of the most prominent barons of Jerusalem as his envoy and a man who was known to hold Saladin's respect: Balian d'Ibelin. The choice is significant in that Richard and Ibelin had been at odds for much of Richard's stay in the Holy Land because of Ibelin's refusal to support Guy de Lusignan. Now, however, Richard had himself abandoned Guy in favor of his nephew Henri de Champagne, who had married the heiress of Jerusalem after her husband Conrad de Montferrat was assassinated.

The terms Ibelin negotiated left the Christians in control of the coastal strip only as far as Jaffa and Lydda. Ibelin's own baronies (Ramla, Mirabel and Ibelin) and the holy cities of Jerusalem, Nazareth and Bethlehem remained in Saracen control. Worse, the Treaty required the Franks to destroy their strategic position on Saladin's lines-of-communication: Ascalon. The city was to be destroyed and left unoccupied by both sides. If these terms sound paltry or humiliating, it is important to remember that a year earlier the Franks had controlled only two isolated cities: Tyre and Acre. Furthermore, the overall strategic situation still overwhelmingly favored Saladin. Richard and the crusaders were going back to the West; the great crusade led by the three richest monarchs in Christendom was over. It is rather amazing that Saladin was prepared to negotiate at all, much less give the Franks a three-year and almost-nine-month breathing space. The Treaty reflects the fact that Saladin's own army was exhausted and demoralized and also wanted peace.

As so often in human history, the weapons are only put away after they have failed to achieve their objective, for if war is the continuation of politics by other means, it is by no means always successful.

The negotiation of the Treaty of Ramla is an important episode in Envoy of Jerusalem.  Buy now!