A Cypriot Hermit, Saint and

Neophytos was born to a peasant family in the Cypriot mountains in 1134. He, like his parents, was illiterate. At the age of 18 he caused a family scandal by running away to a monastery to avoid an arranged marriage. Because he was illiterate, he was initially assigned to tend the monastery vineyard, but after five years he had learned to read and write sufficiently to be made assistant sacristan. He performed these duties for two years, but then he expressed his desire to become a hermit. His superiors did not think he was ripe enough at the age of 25 for such a life, so instead he was sent on a pilgrimage to the Holy Land. He spent six months there visiting the sacred sites and other monasteries, but returned to Cyprus still determined to live a life as a recluse.

In 1160, Neophytos found a cave in the Trodos Mountains just north of Paphos and began turning this into his hermitage by hand. When the Bishop of Paphos heard about this, he insisted that Neophytos accept consecration as a priest and also take on a disciple. Over time that one discipline turned into many, and an entire monastery grew at the foot of the cliff containing Neophytos’ cave/hermitage. A church was built and dedicated to the Holy Cross.

Although Neophytos had initially sought solitude, he was (he says) “forced” to interact not only with the monks of his monastery but with the many visitors who sought his advice. He read voraciously and was also an extremely prolific writer, producing numerous biographies of saints, interpreting scripture, composing hymns, codifying the rules of his monastery, and writing a (lost) history of Cyprus. He also maintained a rigorous correspondence with people as far away as Constantinople. Last but not least, he commissioned the magnificent wall paints of his hermitage, which had grown into a nave, church and cell, which can still be admired to this day. He is believed to have died in 1214.

Both his writings and his letters demonstrate that far from being disinterested in the affairs of the world, Neophytos was actively concerned and, indeed, engaged in with current events―from his cell in the side of a mountain. In short, although he did not want to live with others in a community, he did care about what was happening beyond his cave. More: he recorded ― and at times tried to influence ― the course of events by the advice he offered his visitors and those with whom he corresponded.

For the historian interested in the establishment of Frankish rule on the Island of Cyprus he is particularly important because, in contrast to the Latin and French chronicles (that in a sentence or two claim that the people of Cyprus welcomed Guy de Lusignan―after driving out the Templars―and every one lived happily ever after), Neophytos’ account suggests an extended period of oppression, resistance, violence and struggle. To be sure, Neophytos’ descriptions of all the twelfth century rulers of Cyprus are negative and his commentary on contemporary events is characterized pervasive sense of gloom and impending doom. Yet the fact remains he was living on Cyprus during the period he describes. As such he is the only eye-witness of events that we can still “hear from” today―and he describes the increasing lawlessness and deterioration of governance -- something that is a major theme of my novel The Last Crusader Kingdom.

There is considerable evidence that the educated and aristocratic elites disparaged Neophytos’ somewhat simple and direct style of writing, but this may have been the very reason he was so well loved by the common people of Cyprus: they could understand what he was talking/writing about better than the religious tracts of the more erudite writing from distant Constantinople. It was above all the common people of Cyprus who saw in Neophytos a man of exceptional spiritual wisdom. 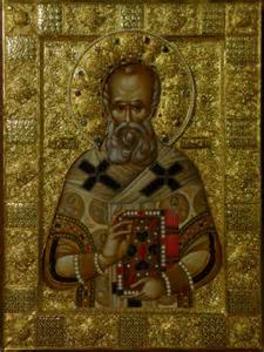