The siege of Acre began in 1189 more by mistake than design. By 1191, however, it had consumed tens of thousands of Christian lives and become an obsession for crusaders. As in WWI, action had become bogged down in a slogging match over a very small piece of territory, while the overall strategic objectives had largely become obscured by the focus on this one, at best tactical, target. The Franks were determined to take Acre, and the Saracens to hold it -- regardless of the cost on either side.

The fall of Jerusalem in 1187 had, however, ignited a massive and vigorous response in the West long before the start of the siege of Acre. The call for a new crusade fell on ready and eager ears in 1187. The Holy Roman Emperor Friedrich "Barbarossa," King Henry II of England, King Philip II of France,  the Dukes of Austria and Aquitaine, the Counts of Champagne and Flanders, and literally hundreds of other noblemen, thousands of knights and tens of thousands of commoners "took the cross" and vowed to retake Jerusalem.

Organizing a military campaign thousands of miles away, even in the age of instant communications, is not child's play and kings and emperors are not amateurs. Once committed to leading armies to the Holy Land, the Holy Roman Emperor and the kings began to meticulously prepare for the campaign, pulling together financial resources, and building or chartering fleets in the case of the English and French, or organizing land-transportation in the case of the Germans. In addition, supplies for men and horses, siege engines, munitions and medical support had to be arranged. The complexity of these operations was enormous, as the noted historian Christopher Tyerman documents in his excellent work How to Plan a Crusade: Reason and Religious War in the Middle Ages. Last but not least, when monarchs prepare to leave their kingdoms for extended periods of time, they also need to provide for a functioning administration to rule in their absence and ensure lines of communication between their mobile headquarters and their capitals. All this takes time.

As a result, the first crusading army did not set out to relieve the Holy Land until almost two years after the disaster at Hattin or only a little before the start of the siege of Acre. This was the army led by the Holy Roman Emperor. Unfortunately, a little more than a year later, Friedrich Barbarossa drowned while crossing a river in Anatolia, and his army was subsequently decimated by disease. Only a small remnant made it to Antioch and from there continued down the coast to -- whether it was rational or not -- join the siege of Acre.

Meanwhile, in July 1190, King Philip II of France and King Richard of England (who had succeeded his father Henry II) set off from Vezelay in France. Both traveled overland as far as Marseilles and then took ships to Sicily, where they gathered their forces, planning to transport their entire army by sea to the Holy Land.  Unfortunately, they did not arrive until after the "sailing season" in the Mediterranean was over and so wintered in Sicily.

It was the spring of 1191, therefore, before the great hosts under Philip II and Richard I set sail for the Holy Land. By now, the siege of Acre had been going on for 21 months, and all the independent crusaders as well as the remnants of the German campaign and Guy de Lusignan with his native troops were concentrated at Acre. Whether seizing Acre made strategic sense or not, the dye had been cast and the kings made for Acre to contribute their fresh reserves of troops and considerable material resources to the siege.

Philip arrived first on May 20 and immediately took command of Frankish operations at Acre. He had brought a number of deconstructed siege engines, which were quickly re-assembled and went into action. King Philip also ordered the undermining of the walls and one of these mines succeeded in bringing down a significant portion of the wall. French assaults on June 5, later in the month and July 2-3, however, failed to achieve a break-through because Saladin's army surrounding the Frankish camp attacked whenever the assaults on Acre were made, preventing the Franks from bringing sufficient force to overwhelm the defense in the breach.

Finally, on June 8, Richard of England and his army joined the siege at Acre after being delayed in the Mediterranean by contrary winds and a diversion to capture the island of Cyprus. While the arrival of so many additional troops should have (and ultimately did) seal the fate of the Saracen garrison at Acre, operations were also undermined by the hostility and rivalry between the French and English kings. Thus, according to an account friendly to the French king, at some undefined point after the English king's arrival, the garrison sent envoys to offer terms of surrender to Philip of France, but Richard of England launched an attack while the Saracens were negotiating with Philip causing them to believe they had been tricked and deceived and hence withdraw. Even accounts friendly to Richard admit that he did not always support attacks ordered by the French king. Furthermore, both kings soon fell ill with a disease called "Arnoldia," and despite (or because of) their presence no single, over-all plan of action was pursued and various assaults, including one by the "squires" without knightly let alone baronial leadership, were undertaken -- all unsuccessfully.

Despite these set-backs and his illness, however, Richard brought a huge fleet that was  now completely choking off all hope of relief and resupply by sea for the Saracen garrison.  He also deployed powerful siege engines that started battering down the so-called "Cursed Tower" and long sections of the wall.  By July 7, the garrison's situation was so desperate that a messenger secretly swam through the Frankish fleet to get word to Saladin that they could not hold out much longer and plead for him to relieve them. Saladin's response was to imperiously order the garrison to hold firm, without offering any form of assistance. Unsurprisingly, five days later the garrison surrendered without Saladin's permission.

The terms of the surrender were not draconian considering the casualties the Christians had suffered in two years. The garrison was to be granted their lives and allowed to depart without their weapons, in exchange for Saladin paying 200,000 Saracen gold pieces, returning the relic that the Franks believed was a fragment of the cross on which Christ was crucified (the "True Cross"), and -- significantly -- returning 2,500 of the prisoners taken at Hattin.

The importance of the last point of negotiation is consistently overlooked in modern accounts, but the Lyon Continuation of William of Tyre's history of the Kingdom of Jerusalem -- the chronicle most likely based on a source written by a native of that Kingdom rather than a cleric sitting thousands of miles away and decades later -- notes that the terms of the agreement called for Saladin to "release one Christian that he held in prison for every Saracen they had captured in the city." To ensure that Saladin upheld his part of the bargain, an estimated 2,500 men (accounts vary) from the garrison were held as hostages.

It is important to note that these hostages were not women or children, not innocent civilians, nor were they technically prisoners; they were hostages. According to the rules of war at this time, their lives were forfeit if the terms of the surrender agreement were not met. Saladin, possibly because he had not been consulted about the terms the garrison negotiated, or possibly because he couldn't raise the money or find the hostages or didn't have the True Cross any longer, failed to comply with the terms of the agreement. He asked for first one extension and then a second, and when he still failed to deliver the prisoners, the True Cross or the money, Richard of England ordered the hostages executed.

The decision was Richard's alone because Philip of France had already packed his bags and sailed back to France as soon as Acre fell to the crusaders. (Much could be said on this topic but it is beyond the scope of this essay.) When on August 19, 1191, Saladin reneged on the negotiated settlement a second time, the mood in the crusader camp turned ugly. The crusaders and Christian clergy had come out in great pomp to receive the True Cross and welcome home fathers, brothers, wives and daughters from captivity only to be disappointed. When Saladin failed to deliver the prisoners "there was great sorrow among the Christians; many tears were shed on that day, and all the men of the host were greatly troubled." (Lyon Continuation of William of Tyre, 125).  There was also considerable dissatisfaction with the Christian leadership (namely Richard and the Duke of Burgundy) who had, from the perspective of the troops, been duped by Saladin.

We will never know why Richard made the decision he did, but there were a number of sound military and political reasons for executing the hostages. First, Richard needed to restore morale and respect for his leadership among the diverse volunteers that made up the crusading force. (Most of the crusaders were not his vassals and could not be commanded; they had to be persuaded to follow him.) Second, he needed to start moving on the true objective (Jerusalem)--so long obscured by the siege of Acre, and he could not do that with 2,500 Saracen fighting men still in Acre inviting an attack on his rear. Third, and most important, he needed to signal to Saladin that he was not to be trifled with -- that he was a dangerous foe.

Richard achieved all three of these objectives, but at a high price to his reputation. To this day, the massacre of hostages at Acre is almost always sited by Richard's detractors as an act of "barbarism." It was far from that, but it was an act of cold-blooded realpolitik in a brutal age.

The Siege of Acre and the massacre of the garrison are important events described in Envoy of Jerusalem. Buy now! 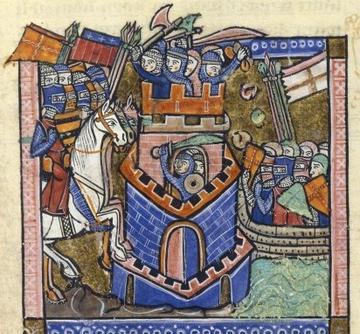 The Arrival of the Third Crusade --

OF Kings and Massacres