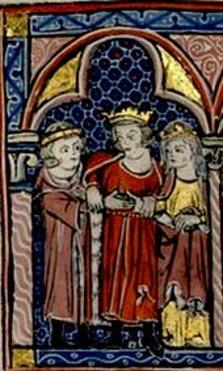 Humphrey de Toron is known mostly for what he lost. He lost his fief, his wife, and his freedom; he surrendered the most powerful border castles of Kerak and Montreal to Saladin--and he rejected a crown. Having lost everything to which he had been entitled by birth and marriage, he fades from the pages of history to die in an unknown place at an unknown date, without ever having sired children.

That would be tragic in itself, but what puts Humphrey on the brink of pathetic is that he was very much to blame for most of these losses. A man of different character might have been the founder of a dynasty, rather than an obscure footnote in history. When researching for my novels in which Humphrey plays a key role, I was very much looking for an explanation of why Humphrey was the way he was. I had a major hint: contemporary accounts of him call him “cowardly and effeminate,” or “more like a woman than a man.” He was said to be very learned, and to have “a gentle manner and a stammer.”

Why would the heir to of one of the greatest barons of Jerusalem, Humphrey de Toron II, be so “cowardly and effeminate?

Humphrey de Toron II (the grandfather of the subject of this essay) had not only been the lord of the important fief of Toron, he was Constable of the Kingdom of Jerusalem from 1153 to 1179. Toron owed 18 knights to the crown, making it a mid-sized barony by man-power, but it held two great castles, Toron itself and Castel Neuf on the border with Syria east of Tyre. Furthermore, the position of constable was not an empty title at this time; it brought with it the duty to muster and command the feudal armies. Humphrey de Toron II repeatedly proved his competence in this role, and died of wounds received defending the young King Baldwin IV at the Battle on the Litani. His son, Humphrey III, had predeceased him, making Humphrey IV his heir.

We do not know how old Humphrey IV was at this time. He would have been at least five and at most thirteen, in either case still a minor. Since young men came of age at fifteen in the Holy Land and Humphrey continued to live with his mother and step-father at least until in November 1183; I think he was most likely born in 1168. If so, he was only eleven when he inherited his grandfather’s barony of Toron. In accordance with the customs of the Kingdom of Jerusalem, although still a minor, he did not become a ward of the king, but remained in his mother’s care. She, however, had remarried after his father’s death. When the elder Toron died making his grandson his heir, she was on her third husband, the infamous Reynald de Châtillon.

Humphrey had most probably been just six years old when Châtillon became his step-father. Thus, from the age of six he had been in the care of a man notorious for having brutally plundered and burned the peaceful, friendly and Christian island of Cyprus, for having tortured a patriarch to extort money, and would soon make a reputation as a truce-breaker.  If Humphrey was latter “more like a girl than a boy” it was Reynald de Châtillon that made him that way. As a novelist I hypothesize a childhood of intimidation and terror, perhaps intended to make Humphrey “stronger,” but which in fact only succeeded in making him timid and unsure of himself ― as the stutter, and later actions, suggests.  Worst case scenario: he was subjected to child abuse by Châtillon, but there is no historical evidence of this.

Châtillon was also responsible for negotiating a brilliant marriage for his step-son: with the king’s half-sister, Isabella of Jerusalem, in 1180, when Isabella was just eight, and Humphrey probably eleven. While the match itself was a major coup, the marriage contract Châtillon negotiated stripped Humphrey of his entire paternity, the barony of Toron. In exchange he received an annual cash payment. Officially this was because Humphrey would one day inherit his mother’s barony of Oultrejourdain and the King did not want two such powerful baronies in the hands of a single lord, but this argument is disingenuous. First, Châtillon held Oultrejourdain in an iron fist and wasn’t about to give it up as long as he lived. Secondly, other even more important baronies, such as Galilee, were held in personal union by extremely powerful lords, e.g. the Count of Tripoli. It is far more likely that the Queen Mother and her avaricious brother, the titular but landless Count of Edessa, were grasping for Toron to enrich themselves (as they did). Apparently, Châtillon didn’t give a damn about Humphrey’s feelings or interests ― or perhaps he had already despaired of Humphrey ever being capable of commanding troops. Whatever the reasons, the loss must have humiliated Humphrey and isolated him further from his paternal heritage and traditions.

The other consequence of the marriage was that Isabella came to live with Humphrey at the border castle of Kerak. She was imprisoned here, cut off from all contact with her mother and step-father. She too was at the “tender mercy” of the notorious Châtillon. It seems probable, given later actions, that it was in this hostile environment that caused two frightened children to form bonds of friendship and affection. They probably both saw Châtillon as “the enemy,” the man who had torn Isabella from her mother’s arms and taken Humphrey’s inheritance away from him.

I hypothesize that this shared childhood under a notorious brute is the key to Humphrey’s relationship with Isabella. We can, based on the description of Humphrey and the fact that his marriage was later invalidated in part because it was not consummated, assume that Humphrey was homosexual. Yet all accounts stress that he did not want to be separated from Isabella, and pined for her years after she had married not just once but three times!

But loving Isabella was not the same as sharing her vision and dreams nor the same as respecting her dynastic role as heiress of Jerusalem. In 1186, when Isabella’s older half-sister Sibylla usurped the crown of Jerusalem without the consent of the High Court, the majority of barons were prepared to crown Isabella as a rival queen ― and make Humphrey king of Jerusalem. He was by then at least seventeen years old, more than old enough by the standards of the day to take up the scepter. Baldwin IV, despite suffering from leprosy, had led his armies in person at the same age.  Any young man with an ounce of ambition, a trace of courage, or a sense of self-respect would have snatched such an opportunity. Humphrey instead snuck out in the dark of night and groveled at Sibylla and her husband’s feet.

The argument that Humphrey did this to save the kingdom from civil war cannot be dismissed out of hand, since even if what came was worse (complete annihilation of the kingdom), Humphrey can’t be blamed for not having foresight. He can, however, be blamed for not having the courage to tell the barons who supported him as king to their faces that he refused to play the role they intended for him. Apparently, he pretended to agree, and then betrayed the barons. His actions were certainly characterized as “betrayal” by the baronial faction later.

It is also significant that Humphrey’s step-father, Châtillon, was a major supporter of Sibylla. It is possible, therefore, that his betrayal of his wife may have stemmed from a terror of opposing Châtillon, or a pathological devotion to the man who had beaten him into a stammering “coward.” How this affected his relationship with his wife can only be speculated upon. While they initially remained married, Isabella’s later willingness to divorce him may have in part been caused by a sense of betrayal at this time.

But first the man to whom Humphrey had done homage, Guy de Lusignan, had to lose the entire kingdom to Saladin. Humphrey is listed in all sources as one of the prisoners taken by the Sultan at the Battle of Hattin, although it’s unclear what purpose our “more girl than boy,” troop-less ex-baron was doing there. He was not released for two years, by which time he spoke excellent Arabic. It is not clear whether he learned it in captivity or already commanded the language. What we do know, however, is that Humphrey did not come out of captivity hating the Saracens as, for example, Châtillon did.

Humphrey promptly joined Guy de Lusignan’s siege of Acre and took Isabella with him. One presumes this was because after two years of separation the young couple (Humphrey was about 21 and Isabella 17) could not bear to be apart. On the other hand, a medieval siege camp was a horrible, unsanitary place infested with disease, rats and insects, and this siege was one in which the besiegers were subject to frequent attacks as well ― not a terribly romantic place to be.

In November 1190, Queen Sibylla and both her daughters died in Acre and Isabella became the heir presumptive to the throne. Unfortunately, however, she needed the consent of the very barons that her husband had betrayed four years earlier. They weren’t having Humphrey. The condition of her coronation was that her marriage to Humphrey be dissolved. This was not difficult, since she had not been the age of consent when it was contracted.

Humphrey tried to retain his bride. He testified that she had consented to the marriage and that the marriage had been consummated. Unfortunately, there were men present willing to challenge his testimony and demand that he defend his words in judicial combat. Humphrey declined.

Why? He must have known that his refusal to defend his testimony with his body would be seen as 1) proof that he lied and/or 2) cowardice. He must have known that by refusing to fight for Isabella he would lose her. Perhaps he recognized that he was too weak to oppose the barons and that he would lose Isabella whether he fought for her or not. Perhaps, being “effeminate” he simply knew he could not win any contest at arms. In either case, Humphrey surrendered yet again, this time his last and arguably most beloved possession.

Humphrey accompanied Guy de Lusignan to Cyprus in 1191, when the former went to meet Richard the Lionheart and seek his support in the dispute over the crown of Jerusalem.  Humphrey, having failed defend his right to his wife in judicial combat, hoped that the powerful Plantagenet would do what he could not and regain his wife for him.  Initially, Richard the Lionheart favored the Lusignan claim to the throne and used Humphrey, who was fluent in Arabic, as an envoy to Saladin.  However, these negotiations soon broke down. By spring 1192, Richard had seen enough to recognize Guy de Lusignan was not fit to be King of Jerusalem and withdrew his support. Conrad de Montferrat, Isabella’s new husband, was recognized as the legitimate king.

Just days later an assassination cut Montferrat’s life short before he could be crowned. Isabella needed a new husband and the choice of the barons fell on Henri de Champagne. Not only did Humphrey remain utterly unacceptable to the High Court, when Richard next opened negotiations with Saladin he turned not to Humphrey but instead to Balian d’Ibelin.

Humphrey is last mentioned as one of the barons that accompanied Guy de Lusignan when the latter when to Cyprus for the last time.  Apparently, having sacrificed everything because of his homage to Guy in 1186, he remained slavishly devoted to him. It is not recorded that he achieved anything on Cyprus, and he is believed to have died in 1197 or 1198, at which time he would have been approximately 30 years old. There is no indication what the cause of death might have been. He left no heirs.

The Man Who Would NOT Be King