Jews in the Crusader Kingdoms 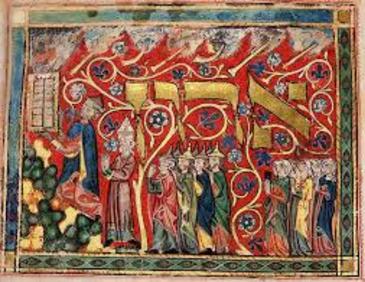 Everyone has heard how the crusaders slaughtered all the inhabitants of the Jerusalem when they captured the city by storm on July 15, 1099. Among the dead were allegedly the entire Jewish population of Jerusalem at the time.  We also know that long before the first crusaders reached Jerusalem, in 1096, Jewish communities in the Rhineland were attacked and massacred mercilessly, and that all subsequent crusades were likewise accompanied by greater or lesser outbreaks of violence against Jews in Western Europe. It may therefore come as a surprise that Jews in the crusader states themselves suffered no persecution. On the contrary, by the end of the 13th century, the crusader kingdom of Jerusalem had become home to a flourishing community of Jews and a major center of Talmudic studies.

How was this possible and how did it come about?

Although Robert Chazan[i] traces the roots of anti-Semitism to the start of the 11th century, when the Jews were complicit in the destruction of the Church of the Holy Sepulcher by the Fatimid caliph in 1009, there is strong evidence that the crusades intensified anti-Semitic feelings among large portions of the population of Western Europe. Daniel P. Franke[ii] rightly points out that the Popes ― right into the 15th century ― maintained a policy of tolerance, quoting from a papal bull in 1120, which states:

We decree that no Christian shall use violence to force [Jews] into baptism while they are unwilling and refuse… Moreover…no Christian shall presume to wound their persons, or kill them, or rob them of their money… Furthermore, while they celebrate their festivals, no one shall disturb them in any way.[iii]

Yet the very fact that 23 popes of the 12th to 15th centuries felt compelled to re-issue this directive underlines the fact that violence against the Jews continued across Western Europe. Certainly the attacks on Jews by the first crusaders spread from Speyer to Worms, Mainz, Trier, Metz, Regensburg, and Prague.  Some historians argue they were not confined to the German-speaking world, but also spread to France. Certainly, England saw a terrible outbreak of violent anti-Semitism in association with Richard I’s coronation in 1190. King (Saint) Louis IX went so far as to elevate Jewish persecution to state policy, although there were less spontaneous acts of violence against them than elsewhere in Europe. So why not in the Holy Land itself?

The initial contact between crusaders and Jews had been bitter. The Jews actively supported the Muslim defenders of Jerusalem, Haifa, and other cities of the Holy Land. When these cities fell to assault, the Jews were massacred along with the Muslim defenders; when the cities agreed to terms, they were allowed to withdraw with their portable goods and chattels. Within ten years, most Jews, who were predominantly urban-dwellers, had been driven out of the territories held by the crusaders. In Jerusalem itself, a ban prohibited Jews from ever re-settling in the Holy City.

Yet there is ample evidence of the fact that the Jews remained or returned to other cities ― or never left at all. Records show there were large Jewish communities in Tyre and Acre, smaller communities in Ascalon and elsewhere.  Furthermore, there were two dozen villages occupied entirely by Jews in Galilee, between Tiberias and Nablus.

Even more astonishing and significant: the First Crusade sparked a Jewish messianic movement.  According to Prawer, “in some communities the Jews sold their property and waited for the Messiah who would bring them to Jerusalem.” [iv] Certainly, the establishment of the crusader states and regular trade and pilgrimage traffic between the Holy Land and Western Europe allowed European Jews to undertake the pilgrimage to Jerusalem and other sacred places in the Holy Land.  The pilgrim traffic to the crusader states included a significant portion of Jews ― and like their Christian counterparts, many of these chose to stay in the Holy Land after they arrived.

They were encouraged to do so not merely by the proximity to their holy sites, but by the prevailing atmosphere of tolerance in the crusader states ― in sharp contrast to the situation “at home” in Western Europe. Precisely because the Frankish elite was a minority in the crusader states, they were dependent upon the cooperation and contribution of a variety of native inhabitants. The majority of these were other kinds of Christians ― Melkites, Maronites and Jacobites, Armenian, Abyssinians and Copts ― but there was also a large Muslim population. People in the Holy Land had to learn to deal with all of them; Jews were just one more “flavor” in the mix.  (See: Muslims in the Crusader States and Native Christians in the Crusader States.)

This social tolerance was underpinned by the laws of the crusader states that did not discriminate against Jews either. Rather, Jews were treated the same way as Muslims and non-Latin Christians in that they were allowed to retain their own laws and customs, living according to their own traditions and celebrating their festivals and rites without interference. In consequence, there were rabbinical courts in both Acre and Tyre (and possibly Tiberias), and Palestine in the crusader period was one of only three centers in the world for Talmudic Study.

Furthermore, the Jews continued to pursue respected professions such as medicine, and took part in commercial activities. There is no evidence that they were required to wear distinctive clothing or live in segregated communities, although it is almost certain that, like the remaining Muslim population, they were subject to additional taxes.

In addition, there was still a large Samaritan population. (Note: Samaritans accept only the first five books of the Hebrew bible as divinely inspired.) Although many Samaritans had been driven into exile across the Middle East, the center of Samaritan worship and scholarship was located in Nablus, and this was where the largest Samaritan population was concentrated in the crusader era. The Samaritans appear to have flourished under crusader rule and a large number of Torah scrolls produced by Samaritans have survived, suggesting a flourishing of activities rather than the reverse.

To be sure, the Jews welcomed Saladin’s victories because he allowed Jews to re-settle in Jerusalem, but within a few decades the situation there had become too precarious. In 1229, the Sultan al-Kamil handed Jerusalem back to Fredrick II Hohenstaufen for ten years, and the Emperor immediately re-imposed the anti-Jewish ban. The Turkoman invasion of 1244 resulted in the sack of Jerusalem, and the Mongol raids of the 1260s made life in and around Jerusalem dangerous. Yet tellingly, the Jews moved not further east to Damascus and Aleppo, but rather preferred to live in the remaining crusader cities, notably Tyre and Acre.

As a result, from the second quarter of the 13th century until its fall, Acre became a vibrant Jewish center, a “cross-section of the different communities of the Diaspora. The leading elements were Jews from Spain and from northern and southern France, in addition to eastern Jews, whether Palestinian-born or from neighboring Moslem, countries…Here a Talmudic academy continued the tradition of the French Tosafists, whereas rabbi Salomon Petit expounded the Kabbala and Spanish Jews continued their own tradition.”[v]

Tragically, despite Islam’s vaunted “tolerance” for Judiasm, this Jewish center and the entire Jewish community that fed and surrounded it were exterminated mercilessly by al-Ashraf Khalil when he captured Acre in 1291.