Battles may win (and lose) kingdoms, but no kingdom can survive without an administrative apparatus that ensures taxes and customs dues are collected, coins are minted, weights and measures standardized, borders controlled, trade fostered, resources regulated, laws enforced and criminals brought to justice. These are the just some of the aspects of “good governance” that help determine a country’s level of civilization. The construction of great cities and a flourishing in crafts, industry and art is rarely (if ever) possible without a sophisticated administrative structure that allows raw materials and labor to be obtained, transported, and paid for, for example.

Feudal kingdoms were no exception, and the twelfth and thirteen centuries were periods in which stronger, more centralized governments with more sophisticated royal administration were evolving in both England and France. In Western Europe the rise of more centralized government generally entailed a strengthening of the crown at the expense of the feudal vassals. (Although Magna Charta and the Oxford Provisions provide examples of how the tensions between crown and vassals could be used to strengthen institutions of consultative government.) Because the Kingdom of Jerusalem in the twelfth century was characterized by absentee kings (two in succession never once set foot in their kingdom) and strong, independent barons, it is often assumed that the Kingdom of Jerusalem lacked sophisticated administration.

In fact, nothing could be farther from the truth. It could, indeed, be argued that the baronial movement that fought off all attempts by the Hohenstaufen to crush their independence through the imposition of autocratic Imperial government was only possible because the administrative apparatus in the Kingdom of Jerusalem was so sophisticated. How else could barons holding fiefs in two different kingdoms (as almost all of them did) otherwise have had the time to engage in a protracted legal struggle with their overlord, defend their fiefs against the enemy, take part in crusades, and still find time to write legal tracts and other scholarly works? The mere fact of being dependent on income from two geographically dispersed places, made it essential for the leading men of the kingdom to have institutionalized deputies capable of acting in their absence and in their interests. Furthermore, warfare is expensive, and so impossible at a national ― or baronial ― level without a means of maintaining sources of income.

Giving credit where it is due: the Franks possessed such sophisticated means of raising money and administering their fiefs as absentee landlords because they were able to take over existing structures left to them by their Arab and Greek predecessors. The Holy Land had, after all, been administrated by the ultimate bureaucracy, the Byzantine Empire, for over three hundred years! Arguably, few of the institutions that served them so well were their own, but the Franks must be given credit for adapting them to their needs so well.

Turning first to the sources of income, the Franks like their predecessors enriched their treasury by the following means:

Rents on land, i.e. tenant farmers paying to the lord rent for the right to work the land and retain three-quarters to two-thirds of the harvest;
Mills for grinding grain into flower;
Olive and wine presses;
Sugar factories;
Ovens (which were usually communal as it took a great deal of wood to heat one and it was more efficient to do this for large quantities of bread;
Taxes on garden produce and orchards;
Bath-houses;
Tolls on roads and at gates;
Import and export duties at the ports;
Anchorage and harbor fees;
Rights of salvage;
Rents for store-frontage;
Fees assessed by the courts on people found guilty of crimes and misdemeanors;
And more.

As this list demonstrates, there were many more ways of making money than “taxing peasants,” and rents of one quarter to one third of the harvest (or the monetary equivalent) was not “excessive,” particularly since it was not the practice in Outremer to require labor on the lord’s own domain as in the West. Merchants bore a higher burden ― and could well afford to because they were making money hand over fist selling high-value, luxury products like spices, silk, ivory, pharmaceuticals, glass, sugar, wine and olive-oil in the markets of the West at many times the cost for those products in Outremer.

To collect all those revenues, however, the kings and their vassals required a veritable army of lessor officials, who represented them, enforced their laws, and collected their fees, duties and taxes.

At the village level there was a local and resident “Head Man” known as the ra’is (also rays). He was a tenant, usually with a bigger house and somewhat more profitable land, e.g. olive orchards or vineyards, and he spoke the same language and shared the religion of the other inhabitants of the village because he was the descendent of the ra’is, who had been there before the Franks came. In new Frankish settlements, the function of the ra’is was performed by the lord’s agent, referred to variously as dispensator or locator.  The ra’is was an intermediary between the lord and his tenants and represented the interests of the community to the lord.

On the other side the lord employed a dragoman and a scribe to represent his interests and enforce his laws in the community. The dragoman was similar to the English sheriff or modern police chief, responsible for law and order, capturing outlaws/criminals, and carrying out the sentence of the responsible court. The scribe, far from being a mere note-taker, was responsible for collecting taxes, rents, duties etc. and recording their collection so that no one could be taxed twice etc. Both of these positions were usually held by Franks of the “sergeant” class (free burgesses), but there are records of natives holding these offices. Since many native Christians at this time spoke Arabic and used Arabic names, however, we cannot know if the individuals entrusted with these important offices were Muslim, Orthodox Christians or converts to Catholicism. Notably, these men of the sergeant class also clearly needed to be literate to carry out their duties.

In addition to these officers who lived in the domain or territory (some scribes and dragomen served multiple villages) which they were responsible for, the king and the greater lords had household officials, who managed their affairs centrally. These officials oversaw the dragomen and scribes, kept central records, and the lord’s treasury. Various titles were used but common terms were “chancellors” for keeping charters and legal records, seneschals for maintaining financial records (CFO), and constables for military affairs assisted by the marshal for maintaining the vital horses.

Finally, in the urban centers and ports, there large customs houses staffed by a bevy of customs officials who kept an eye and records of all the ships and their cargoes moving in and out of the port. There were customs officials at the gates to the city as well. Other officials were responsible for monitoring and checking on the weights and measures used in the markets. Others oversaw the removal of refuse and the rules of the wells, bakeries, and bath-houses. There were men who patrolled the streets to keep order, especially at night. All of these individuals were part of the sophisticated administrative system which enabled the Kingdom of Jerusalem to survive ― and relied on the native Christians with the greatest institutional memory. They are indicative of a well-functioning state, and particularly impressive when one considers just how weak the crown was in light of its near perpetual absenteeism. 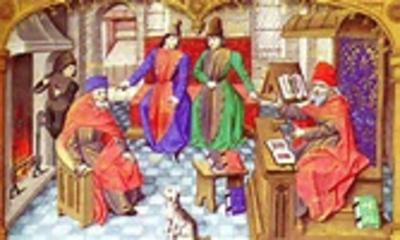 Dragomen, Scribes and Ra’is: The Administrative Backbone of a Kingdom