The early history of the Kingdom of Cyprus is largely lost in the mists of time, and much of what we think we know―or what is currently accepted in academic circles―is dubious. Particularly questionable is the notion that Guy de Lusignan arrived on a peaceful island, whose Greek population was ready to accept the deposed Latin King of Jerusalem (and architect of disaster in the Holy Land) as their overlord. I believe this notion is the result of greatly abbreviated historiography in the 13th century, which has been adopted too uncritically ever since.

We know that Richard I of England, having conquered Cyprus in May 1191, sold it to the Knights Templar for 100,000 bezants in July of the same year. According to Peter Edbury, the leading modern historian of medieval Cyprus, their rule was “rapacious and unpopular,” resulting in a revolt in April 1192. (See Templar Rule on Cyprus.) Although a Templar sortie temporarily scattered the rebels, the causes of the revolt were hardly addressed and the latent threat of continued/renewed violence was clear. In the circumstances, the Grand Master of the Templars recognized that his Order would have to invest considerable manpower to regain control of the island.  He also recognized that he did not have the resources to fight in both Cyprus and Syria. In consequence, he gave precedence (as he must) to the struggle on the mainland, the Holy Land itself, against the Saracens. The Templars duly returned the island to Richard of England.

Richard promptly sold the island a second time, this time to Guy de Lusignan. Guy de Lusignan had been crowned and anointed King of Jerusalem in 1186 in a coup d’etat engineered by his wife, Sibylla. Although widely viewed as a usurper, the bulk of the barons submitted to his rule in order to fight united against the much superior forces of Saladin that threatened the Kingdom. Guy, however, proceeded to prove the low-opinion of his barons correct by promptly leading the entire Christian army to an avoidable defeat on the Horns of Hattin on July 4, 1187.  He spent roughly a year in Saracen captivity, while his Kingdom fell city by city and castle by castle to Saladin, until only the city of Tyre remained. Needless to say, this further discredited him with the surviving barons, prelates, and burghers of his kingdom. His claim to the crown of Jerusalem was undermined fatally when his wife, through whom he had gained it, died in November 1190. Although Guy continued to style himself “King of Jerusalem,” a fiction at first bolstered by King Richard of England’s support, by April 1192 King Richard had given up on him. Bowing to the High Court of Jerusalem, Richard abandoned Guy and acknowledged Conrad de Montferrat as King of Jerusalem. The sale of Cyprus to Guy was, therefore, a means of compensating him for the loss of his kingdom of Jerusalem.

Guy may have left for Cyprus at once, in which case he would have arrived in April 1192.  However, this is far from certain because at the time the Third Crusade was still in progress. It seems unlikely that Guy would have convinced many knights to accompany him to Cyprus as long as Richard the Lionheart was still fighting for Jerusalem and Jaffa. A more likely date for Guy’s arrival on Cyprus is therefore October 1192, after Richard’s departure for the West.

Guy was apparently accompanied by a small group of Frankish lords and knights whose lands had been lost to Saladin in 1187/1188 and not been recaptured in the course of the Third Crusade. The names of only a few are known. These include Humphrey de Toron, Renier de Jubail, Reynald Barlais, Walter de Bethsan, and Galganus de Cheneché. (Guy's older brother Aimery is notably absent.)

Guy would have arrived on an island that was either still in a state of open rebellion or completely lawless. Admittedly, historian George Hill (who was actually an expert in ancient history, coins and iconography rather than a medievalist), tries to explain how Guy arrived on an island eagerly awaiting him by inventing (that is the only word one can use since he sites no source) the story that the Templars “slew the Greeks indiscriminately like sheep; a number of Greeks who sought asylum in a church were massacred; the mounted Templars rode through [Nicosia] spitting on their lances everyone they could reach; the streets ran with blood…The Templars rode through the land, sacking villages and spreading desolation, for the population of both cities and villages fled to the mountains.” (George Hill, A History of Cyprus, Volume 2: The Frankish Period 1192 – 1432,” Cambridge University Press, 1948, p. 37.)

There’s a serious problem with this lurid tale. As Hill himself admits, the Templars had just fourteen knights on Cyprus and 29 sergeants; the Greek population of the island at this time, however, was roughly 100,000. Yes, in a surprise sortie to fight their way out of Nicosia and flee to Acre (as we know they did), the Templars would surely have killed many civilians, including innocent ones. It is unlikely, however, that the fleeing Templars would have taken the time to stop and slaughter people collected in a church since that would have given the armed insurgents (who had forced the Templars to seek refuge in their commandery in the first place) to rally, attack and kill them. They certainly did not have the time and resources to slaughter people in other cities and towns scattered over nearly 10,000 square kilometers of island. In short, we can be sure the Templars slaughtered enough people to be remembered with hatred, but not enough to break the resistance to Latin rule, much less to denude the island of its population. If nothing else, if the Templars had broken the resistance, they would not have fled to Acre, admitted defeat and urged the Grand Chapter to return Cyprus to Richard of England!

Despite the absurdity of the notion that Guy arrived on a peaceful island willing to receive him without resistance, most histories today repeat a charming story. Namely: as soon as Guy arrived on Cyprus he sent to his arch-enemy Saladin for advice on how to rule it. What is more, the ever chivalrous and wise Sultan graciously responded that “if he wants the island to be secure he must give it all away.” (See Edbury, The Kingdom of Cyprus and the Crusades, 1191 – 1374, Cambridge University Press, 1991, p. 16.) Allegedly, based on this advice, Guy invited settlers from all the Christian countries of the eastern Mediterranean to settle on Cyprus, offering everyone rich rewards and making them marry the local women. According to this fairy tale, the disposed peoples of Syria, both high and low, flooded to Cyprus and were rewarded with rich fiefs, until Guy had only enough land to support just 20 household knights, but after that everyone lived happily ever after.

History isn’t like that, although―often―there is a kernel of truth in such legends. I think it is fair to assume that very many of the men and women who had lost their lands and livelihoods to the Saracens after Hattin did eventually come to settle on Cyprus, but I question that they arrived in the first two years after Guy acquired the island. The reason I doubt this is simple. The Knights Templar had just abandoned the island because it would be too costly, time-consuming and difficult to pacify.

In short, whoever came to Cyprus with Guy in early or late 1192 would not have found an empty island―much less one full of happy natives waiting to welcome them with song and flowers. On the contrary, they were already in active rebellion against the Templars and ready to resist further attempts by the Latins to control and dominate them. Perhaps the one sentence about making the settlers marry local women is a hint to a more chilling reality: when the settlers finally came that after years of resistance to Latin rule had been suppressed, they found a local population with few young men but many widows.

Furthermore, we know that at no time in his life did Guy de Lusignan distinguish himself by wisdom or common sense. He had alienated his brother-in-law King Baldwin IV and nearly the entire High Court of Jerusalem within just three years of his marriage to Sibylla.  He lost his entire kingdom in a disastrous and unnecessary campaign less than a year after he was crowned king. He started a strategically nonsensical siege of Acre that consumed crusader lives and resources for three years. He did nothing of note the entire time Richard the Lionheart was in the Holy Land. Is it really credible that he took control of a rebellious island (that the Templars thought beyond their capacity to pacify) and set everything right in less than two years?

I think not. And Guy had only two years because he died in 1194, either in April/May or toward the end of the year depending on which source one consults. That is too little time even for a more competent leader to be the architect of Cyprus’ success. That honor belongs, I believe, to his older brother, the ever competent Aimery de Lusignan, who was lord of Cyprus not two years but eleven.  See:Founder of a Dynasty 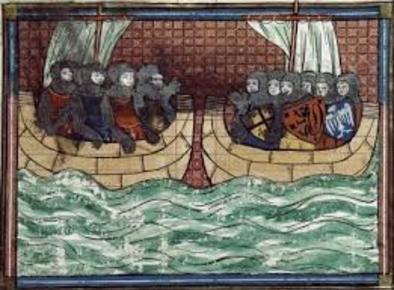 The Creation of the Kingdom of Cyprus

The history of Outremer in the 13th century was materially altered by the establishment of a stable Latin Kingdom on the island of Cyprus.  It is important to understand how this kingdom came into being -- even if the sources are so dubious that speculation is called for.