The Knights Templar and 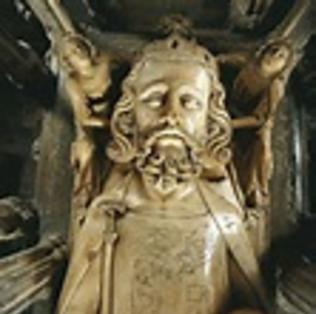 Edward II has not gone down in history as one of Britain’s greater monarchs.  He lacked the military effectiveness of his brutal father, and suffered the humiliating defeat at Bannockburn. He was openly homosexual in an age when this was widely despised, illegal and a cardinal sin. He indulged his favorites and lavished favors on them – to the outrage of the magnates of the realm, who expected to be the recipients of royal favor. And, of course, he ended his reign ignominiously, abandoned by the bulk of his vassals and subjects, and forced to flee before the invading forces of his estranged queen, her lover and his fourteen year old son.  But, for all his weaknesses and errors of judgment, he was not entirely unscrupulous or heartless, and he should be remembered with respect for his stance concerning the Knights Templar.

On the night of Friday, October 13, 1307, King Philip IV of France’s men broke into the commandaries of the Knights Templar throughout France and arrested everyone they found, knights, sergeants and lay-brothers.  The Templars were accused of a catalogue of heinous crimes from idolatry to sodomy. They were alleged to have cremated the bodies of their comrades (a sin in the medieval church) and then consumed their ashes. They were said to have roasted infants alive and eaten them as well.  Compared to these charges, the accusations of devil worship, blasphemy, corruption and deflowering virgins were almost child’s play.

Modern historians agree that the charges were trumped up and motivated by Philip IV’s empty coffers. Philip IV used similar charges to justify confiscation of the property of the Jews and to remove Pope Benedict the XI.  Further evidence that he did not believe the vile charges against the Templars was Philip IV’s close association with them prior to their

arrest.  Indeed, the day before the mass arrests, the Grand Marshal of the Templars was given a place of honor as pall bearer to the deceased wife of Charles of Valois, the king’s brother -- hardly the place for a man sincerely suspected of devil worship, cannibalism and sodomy, but Philip IV was nothing if not cold-blooded.

All those arrested, including the very men King Philip had treated as friends and advisors only months, days and even hours before, were subjected to brutal torture until they confessed to the catalog of crimes the French King had concocted. The tortures employed included tearing out men’s teeth, burning the soles off their feet (crippling many), suspending men by their wrists after tying their hands behind their backs, tearing off fingernails etc. etc. Between torture sessions, the arrested monks were held in dungeons with little (if any) light or air, given poor rations, and no access to sanitary facilities, so that many became ill, weakening their ability to withstand the torture further. The treatment was so brutal that no less than 36 Templars died under torture in the first week after the arrests. Most of those that did not die, however, eventually confessed to one or more of the charges against them. Only a few held out, while fifty-four Templars, who had the courage to retract the confessions torn from them under torture, were burned at the stake as “relapsed heretics.”

While this was all going on in France, the rest of Christendom was dumbstruck and amazed. Since the Templars were an international organization owing allegiance only to the pope, it was important for Philip IV to gain papal support for his actions, and to convince his fellow monarchs to follow his lead. Tragically, the Pope at the time lived in terror of King Philip IV, who had deposed his predecessor with accusations almost identical to those leveled against the Templars. He preferred to sacrifice the Templars rather than risk confrontation with King Philip. (The pope resided in Avignon at this time and was widely viewed as a prisoner or puppet of the French king.)

Enter Edward II of England, the son-in-law of Philip IV. A month after the arrests in France, Edward’s “dear” father-in-law sent a special envoy to him laden with documents that purported to prove the guilt of the Templars.  Edward’s reaction was to write to the Kings of Portugal, Castile, Aragon, and Sicily, denouncing the King of France. Edward rejected the charges against the Templars as monstrous lies, and reminded his fellow monarchs of the Templars service in the Holy Land and their “becoming devotion to God.” He urged the recipients of his letter to turn a deaf ear “to the slanders of ill-natured men.”

Edward also wrote to the pope urging him to open an independent inquiry, but the pope responded by ordering the arrest of the Templars.  Edward II received these papal instructions on December 15, 1307, but he delayed arresting the Templars until January 7.  This three week delay enabled many English Templars to “disappear,” – and possibly some of their portable wealth with them. But most “wealth” in medieval England was, of course, land and Edward II now made a virtue out of necessity and seized all Templar properties for the crown. One can hardly blame him.

What I find remarkable and noteworthy is that even now he did not entirely abandon the Templars. When the pope insisted that the arrested Templars (those like the Master of England William de la More, who was determined to defend his Order, or those too old and feeble too escape) be tortured to force confessions, Edward of England blandly replied that torture was not part of English jurisprudence, adding that he didn’t have anyone in the kingdom experienced in such skills. (The English crown had resolutely refused to allow the Dominicans to introduce the Inquisition into England.)

For three years (!), Edward continued to resist demands that the Templars be tortured until the pope threatened him with excommunication – and sent ten of his best torturers to help the backward English crown. (Today we call it "capacity building.")  Edward caved in, but in a last gesture of loyalty he told the torture team they were not to mutilate their victims, leave permanent injuries or cause violent effusions of blood.

Edward of England enriched himself from the Templars, but, to the extent that he was able, he spared them from cruel and inhuman treatment. It is perhaps only a footnote in an otherwise sad and unlucky reign, but I think Edward still deserves to be honored for his stance on this issue.

The last Grand Master and Marshal of the Knights Templar, Jacques de Molay and Geoffrey de Charney respectively, were burned at the stake for retracting their confessions, in the presence of King Philip, on March 18, 1314.

In 2007 the Vatican officially declared the Templars’ innocent based on the evidence still in the Papal archives.