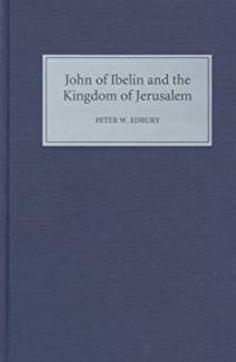 John of Ibelin was one of the most influential and colorful barons of the 13th century crusader kingdoms of Jerusalem and Cyprus. He was the grandson of Balian of Ibelin, the man who defended Jerusalem against Saladin in 1187 and later negotiated the truce that ended the Third Crusade for Richard the Lionheart. (Balian is familiar to most people because of the historically inaccurate Hollywood film "The Kingdom of Heaven" starring Orlando Bloom.) His father, Philip of Ibelin, had been the Regent of Cyprus, and John may have grown up on the island. He supported his uncle, also John of Ibelin and Lord of Beirut, in the baronial conflict with Friedrich II Hohenstaufen, 1228 - 1243. He participated in the 7th Crusade under King (Saint) Louis IX, playing a prominent role and winning praise for Jean de Joinville. He was also the first Ibelin to raise to count, having obtained the title of Count of Jaffa -- previously a royal domain -- in or around 1246. For all that, John of Ibelin (or John of Jaffa as he is more commonly known to distinguish him from the many other Johns of Ibelin) is most famous and most revered not for his deeds at arms or in government, but as a scholar. John of Jaffa was the author of a legal treatise on the laws and feudal customs of the Kingdom of Jerusalem, which has been described by scholars as "one of the most remarkable lay writings of the thirteenth century." (Jonathan Riley Smith, The Feudal Nobility of the Kingdom of Jerusalem 1174-1277.)

Edbury, one of the leading contemporary scholars of the crusader states, divides his book into two parts. In the first, he traces John of Jaffa's political career, starting with the (still somewhat mysterious) rise of the Ibelin family, and then looking at John's own biography in some detail. In the second part of the book, Edbury examines the appendices of John's famous treatise.  Far from being an arcane study of legal trivia, these appendices provide detailed insight into the feudal structure, military obligations and clerical establishment of the 12th century Kingdom of Jerusalem. For anyone interested in the history of the crusader states this is a gold-mine, a resource one will want to own and have at one's fingertips.

Edbury writes in an accessible, fluid style that makes it easy to read his works and this is no exception. The book is also sufficiently concise to make the first part of the book an excellent introduction to the history of the Holy Land during the period of John of Jaffa's lifetime, roughly 1215 - 1266. Edbury provides maps and invaluable genealogy tables of the House of Ibelin as well as an extensive bibliography.

John of Ibelin and the Kingdom of Jerusalem