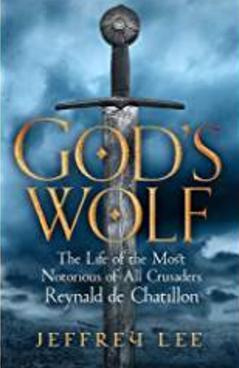 The conventional portrayal of Reynald de Châtillon as a “rogue baron,” whose brutal and fanatical policies led directly to the destruction of the Christian Kingdom of Jerusalem, has long been in need of revision. Professor Bernard Hamilton, one of the leading historians of the crusades, argues persuasively in his biography of Baldwin IV, for example, that Reynald de Châtillon’s strategy in the last decade before the Battle of Hattin was both brilliant and effective. Even the infamous Red Sea Raids, usually treated as appalling piracy, Hamilton notes, were a highly effective in undermining Saladin’s authority and support among his fellow Muslims. I, therefore, bought this book eager for a more detailed and more fully documented account than Hamilton provided in passing.

Instead, I was confronted by a work dressed-up as if it were scholarly ― with footnotes and bibliography ― but, in fact, not only cluttered with errors but intentionally manipulative of the primary sources to the point that it borders on fraud. To put it simply: whenever a source can be quoted to support his case, Lee quotes it like the Gospel truth; if the exact same source says anything against Châtillon, he dismisses it as “biased” or ignores it altogether. (Lee incidentally blithely quotes and cites the Chronique d’Ernoul throughout the book as if he is quoting a single, comprehensive firsthand account; in fact, the original Chronicle of Ernoul has been lost, and all we have today are often contradictory and subsequently modified chronicles that scholars believe include fragments of the lost original.) More serious, perhaps, is Lee’s tendency to omit important relevant facts from his narrative whenever they get in the way of his thesis ― apparently on the assumption that his readers will be so ignorant that they will not notice. Alternatively, Lee makes bald assertions without bothering to give a source of any kind. Last but not least, Lee’s logic is bizarrely biased. Below are some examples of all these practices for those who need evidence to be convinced.

1. The High Court and Constitution of Jerusalem: Lee’s entire description of Sibylla and Guy de Lusignan’s usurpation of the throne in 1186 is cast as the legitimate queen (Sibylla) supported by the “loyal” Châtillon against a coup attempt by the Count of Tripoli and his cronies. Lee’s account conveniently ignores both the High Court of Jerusalem and its role in the election of the king. The point Lee either ignores, forgets or intentionally conceals is that the crown of Jerusalem was NOT hereditary. The king was chosen by the High Court of Jerusalem, and no one could legally wear the crown without the consent of the High Court. Far from being a loyal supporter of the legitimate monarch, Châtillon actively supported an illegal putsch by crowning Sibylla against the wishes of the majority of the High Court. She was not the “legal” queen of Jerusalem as Lee would have us believe (although I suspect he knows better himself.)

2. The Springs of Cresson: Although Lee otherwise frequently cites the Chronique de Ernoul, he doggedly refuses to follow this source’s description of the events leading to the slaughter of the Templars and Hospitallers at the Springs of Cresson. He thereby omits the important attempts by leading members of the High Court to reconcile Tripoli and Lusignan.  Yet scholars believe that the description of the events surrounding the engagement at Cresson is the most accurate and verifiable piece of the entire (lost) chronicle of Ernoul because it is the only section in which Ernoul identifies himself as having been present. In short, this is a firsthand account, not just the account of a contemporary who had the opportunity to question participants or an account that was written decades later or half a world away, as the sources Lee cites. Furthermore, this part of the chronicle (that takes up fully six pages of text in the Ashgate translation, or paragraphs 23-28 of the original) is very precise. Yet Lee discredits the passages that all legitimate scholars find credible with a dismissive footnote in which he remarks: “Ernoul spun a convoluted yarn about the Battle of Cresson.” In other words, the firsthand account by an eyewitness that Lee otherwise quotes as absolute truth is suddenly just “spinning tales” while Lee, living over eight hundred years later and half a world away, knows the “truth.” Really?

3. The Count of Edessa at Hattin: Lee argues that everyone who escaped from Hattin alive were “precisely the forces most opposed to Guy’s faction….”(p. 264). He conveniently “forgets” or overlooks the fact that the Joscelyn de Courtenay, Count of Edessa, the uncle of Queen Sibylla, and a core member of putsch that illegally made Guy king a few months early, also escaped from Hattin alive. Edessa’s escape undermines and exposes the absurdity of his Lee’s entire thesis, namely: that a traitorous clique of nobles around the Count of Tripoli deliberately lost the battle ― strangely by charging with leveled lance straight into the Saracen lines.

In describing the Battle of Hattin, Lee writes: “The charge was the Franks’ most fearsome weapon. To opponents it seemed that a mounted mailed knight could ‘drive a hole through the walls of Babylon.’ In close formation wedged together so tightly that some horses might even be lifted off the ground” (really? I wonder if Lee has even ridden a horse in his life, but ok), “the charge, with its cutting edge of couched lances, could prove unstoppable.” (p. 262) So far so good. This is all well-known, accepted fact (except for the fanciful bit about horses being lifted off the ground), but two pages earlier when he mentions the Count of Tripoli’s charge into the very teeth of the Saracen army he calls it “fleeing the field.” Indeed, he imputes that not only Tripoli but Ibelin (who was almost certainly not with Tripoli since Tripoli led the van and Balian commanded the reargurad) and Sidon (who he never mentions by name, incidentally) all just “fled,” while “Reynald de Châtillon stood and fought loyally beside the king.” (p. 260.)  Now the point here is that the charge was indeed the Frank’s greatest weapon, and when Tripoli mounted his charge it could very well have succeeded had it only been reinforced by King Guy and Châtillon. Instead, Lee’s hero, portrayed throughout his book as a strategic genius, just stood around stupidly with the infantry while Tripoli attempted (according to some accounts on the orders of the king) to break the Saracen encirclement with the Frank’s best weapon: a cavalry charge with leveled lances. Then having waited until the infantry had become completely demoralized and abandoned the knights, Châtillon allegedly made the "courageous and brilliant" strategic decision to do what Tripoli had already done. According to Lee, Châtillon failed not because he had been too stupid to charge with Tripoli and so ensure critical mass, but rather because of Tripoli’s “desertion.”

This is nothing short of turning the facts on their head. A charge is charge, and, it is not inherently less “brilliant” or less effective, just because it is led by the Count of Tripoli rather than by Reynald de Châtillon. You cannot rationally call two groups of men doing exactly the same thing ― charging the enemy with leveled lances ― two different things simply because one group is led by your hero and the other by your villain.  Indeed, it is far more likely that a charge undertaken after the disintegration of the army -- when the field was lost -- was an attempt to run away than a charge taken at the height of the battle.  Ultimately, what matters is timing, and Châtillon had once before landed himself in Saracen captivity because he failed to charge at the appropriate time.

Manipulation of Sources and Half Truths:

1. Aftermath of the Springs of Cresson catastrophe: Having told an apparently fabricated account of the Springs of Cresson that deviates from the rare first-hand account provided by Ernoul, Lee describes a delegation allegedly sent from King Guy to the Count of Tripoli to “censure Raymond for his actions.” Lee provides verbatim quotes of the exchange between the king’s messenger and Tripoli ― and cites a Muslim source (p. 249). In short, Lee expects his readers to believe that Saladin’s secretary was sitting in the room during an exchange between two Christian leaders. Nonsense. On the other hand, the first-hand accounts that genuine scholars follow make it clear that the delegation of nobles was on their way to Tiberias to meet with Tripoli before the catastrophe at Cresson and their message was one of reconciliation, not censure.

2. Battle of Montgisard: In Lee’s description of the Battle of Montgisard he makes Châtillon the sole architect of the victory. This ignores completely the role of the Templars, led by their Grand Master, and all the other leading nobles listed in contemporary accounts of the battle (Edessa, Sidon, Ramla and Balian). Indeed, Lee even dismisses the role of the young King himself. Instead, he depicts Baldwin IV as deathly ill and incapable of leading. This is false. At this stage in his reign Baldwin IV was NOT crippled by his leprosy. On the contrary, according to Tyre (who was Baldwin’s tutor and chancellor, and one of the sources Lee repeatedly cites), the young king was “more skilled than men who were older than himself in controlling horses and in riding them at a gallop.” (Tyre, History of Deeds done Beyond the Sea, I, XXI, p. 962) Indeed, whereas Lee consistently portrays Baldwin the IV as a crippled and disfigured invalid, in reality, Baldwin was neither disfigured nor handicapped when he came to the throne and his condition only deteriorated significantly after Montgisard. Even two years later, at the Battle on the Litani, Baldwin IV fought on horseback at the head of his troops. (Note: Ridley Scott in his otherwise inaccurate film “The Kingdom of Heaven” was more accurate on this point; he has Baldwin IV reminiscing about Montgisard, saying how he had then been beautiful and strong.)

3. King Richard’s Support for Chatillon’s “Faction”: Lee attempts to show that Richard the Lionheart was an admirer of Châtillon by claiming: “…Richard embraced Reynald’s faction and backed the claim of Guy de Lusignan to the disputed throne of Jerusalem.” Aside from the fact that Richard had other motives for favoring Lusignan quite irrelevant to Châtillon’s support for a usurper, Lee conveniently leaves out the fact that Richard soon recognized his error, changed sides, and endorsed “the party led by Reynald’s bitter enemy, Balian of Ibelin.” Indeed, not only did Richard recognize Conrad de Montferrat as king of Jerusalem, he personally appointed “Reynald’s bitter enemy, Balian of Ibelin” is own envoy in his negotiations with Saladin ― an extraordinary mark of both trust and respect. Lee doesn’t want his readers to know that since it might cast doubt on his depiction of Ibelin as a lackey of Tripoli, so he just ignores the judgment of ― in Lee’s own words ― “the great King Richard himself.” (Lee, p. 281-282.)

These are littered throughout the book and I’ve only selected three examples to underscore my case.

1. Lee arbitrarily declares that Isabella of Jerusalem was 12 when she went to Kerak to live with her future husband under Châtillon’s guardianship; historically she was 8.

3. Lee dismissively claims that medicine of the period was “no more than base superstition, with treatment usually exacerbating any malady.” (p. 11). In fact, as experts such as Piers Mitchell (Medicine in the Crusades, Cambridge University Press, 2004) make abundantly clear, medical practice at this time was remarkably sophisticated, made extensive use of anesthetics, saved many lives, and ― with respect to trauma treatment ― was not very different from medical practice today.

I could go on for almost as many pages as God’s Wolf, but that would be a waste of everyone’s time.

The Life of the Most Notorious of All Crusaders,