Leprosy in Byzantium and the Medieval West 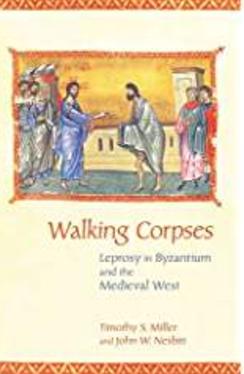 This is an important scholarly work on the treatment of lepers in the Middle Ages. It covers everything from theories on the causes of leprosy to the administration of leper colonies. The book is well researched and the theses are well presented, argued and documented.

Given the subject matter, this is not an “easy” read and is intended more for academics than for the general public. Yet it provides very valuable insights into medieval society that would benefit more casual students of the Middle Ages.  For one thing, Miller and Nesbitt effectively debunk the notion that leper colonies were places of punishment or that lepers were consistently and cruelly expelled from society out of moral revulsion.  On the contrary, they convincingly argue “ spiritual leaders [shaped] a new ethical imperative to accept lepers as suffering brothers in Christ, not to reject them as ritually impure or as objects of divine punishment.” In Byzantium, leprosy even came to be called “the Holy Disease” and a number of legends associated lepers with Christ, while service to lepers was viewed as particularly holy.

Nevertheless, the fear of contagion was — understandably — enormous and so civil and responsible ecclesiastical leaders sought to separate lepers from society at large.  Leper colonies were thus generally located outside city walls — but close enough for lepers to engage in trade and receive alms and visits from relatives, friends and patrons.

Because the organization of several important leper colonies is documented, we have insight into how the lepers managed their affairs, and Miller and Nesbitt highlight the fact that most leper colonies were run by the lepers themselves, who appear to have most often elected their own leaders! Furthermore, women lepers took part in the administration of leper colonies on equal footing with men and in some cases even obtained positions of authority.

This later fact begs the question if only leprous women were deemed the equals of men, or if medieval society wasn’t considerably more respectful of women’s intellect and capabilities than is generally assumed? Or was, as Miller and Nesbitt ask at the very end of their work, the role played by women and the “democratic” nature of leper colonies a reason for increasing suspicion and hostility to lepers at the end of the Middle Ages?