In this highly readable history, Christopher MacEvitt has made an outstanding contribution to crusades scholarship.  Noting that most histories of the crusades rely on Latin/Frankish and Saracen sources but almost completely overlook or ignore the works of native Orthodox Christians, MacEvitt has undertaken a study of how these sources depict the crusaders and the states they established. His conclusion, based on a meticulous analysis of the sources, is that “the segregationist vision of the Frankish Levant is deeply flawed….” (Christopher MacEvitt, The Crusades and the Christian World of the East: Rough Tolerance, University of Pennsylvania Press, 2008, p. 21.)  He goes on to note that “the Frankish aristocracy allowed conduct and beliefs that would have been unacceptable in Christian Europe.” (MacEvitt, p.21) Finally, he concludes the book by stressing that “…the eventual defeat of the Frankish principalities of the Levant can no longer depend on the argument that their fall was caused by their lack of roots in their new home, or because of the antagonism of the people they ruled.” (MacEvitt, p. 179.)

The evidence MacEvitt marshals to support his theses is not only overwhelming, it is well-presented. MacEvitt’s understanding of Armenian and other native Christian societies, helps place crusader actions in a new context. He explains in clear and understandable terms the differences between the various Christian sects in the region, and helps the reader comprehend the complexity of dealing with them in a period when language divisions did not follow theological ones.

Rather than relying solely on theory and church commentary, MacEvitt produces concrete examples of behavior that demonstrates beyond a doubt that the Frankish population of Outremer intermingled, intermarried and cooperated extensively with the native Christians of the region.  This was not just a matter of Frankish and native Christian communities visiting the same bazaars and taverns, but of them undertaking joint pilgrimages, sharing churches, taking part in the same processions, and using each other’s priests as confessors. Such actions are clear indications that for the average Frank the common belief in Christ outweighed the theological differences that animated church scholars.

MacEvitt discounts the usual argument for Frankish “oppression” (the imposition of Latin bishops/patriarchs) by pointing out that Greek Orthodox patriarchs were replaced by Latin patriarchs because the senior Greek clergy had already fled the Holy Land in the face of Muslim persecution before the arrival of the crusades. He notes further that “the crusaders enthroned the Greek patriarch in Antioch in the cathedral, recognizing his authority over Latins and Melkites alike” on their arrival there. (MacEvitt, p. 111.) Adding, “more Melkite bishops could be found throughout Palestine after the crusader conquest than had been there in the previous fifty years.” (MacEvitt, p. 112).

Perhaps more important, while noting that all “Orthodox” Christians were viewed with various degrees of skepticism by the Roman Catholic hierarchy, he points out that the crusader states were not theocracies run by religious scholars, but secular states run by educated but fundamentally hard-nosed, practical, fighting men. The rule they “imposed” on the liberated territories borrowed far more from the traditions of the Eastern Roman Empire (Byzantium) than Western Europe. MacEvitt demonstrates, for example, that the crusader states did not introduce any form of serfdom on the native peasants ― Christian or Muslim, and that the crusader states offered a variety of opportunities for advancement and enrichment for native elites.

MacEvitt argues convincingly that the new rulers needed the support of local elites in order to govern. As a result, the native elites had opportunities in a wide range of fields from collecting taxes and administering rural communities to serving as tax-collectors, harbor-masters, and accountants in the cities. MacEvitt provides examples of native Christians being land-owners in their own right, and being wealthy enough to make charitable bequests of significant value.  In addition, he claims to have identified native Christians serving as knights and, in one case, even as Marshal of Jerusalem. While earlier historians have assumed that these native Christians “must have” first converted to Latin Christianity, MacEvitt argues that there is no evidence of this whatsoever.

In short, MacEvitt completely debunks earlier histories that allege the Franks practiced a kind of “apartheid” on the native Christians, and sets the record straight. Anyone interested in the crusades and crusader states ― particularly anyone writing about them ― should not overlook this important and enlightening work. 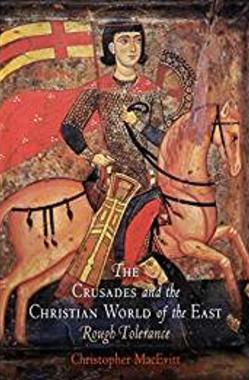 The Crusades and the Christian World of the East: Rough Tolerance