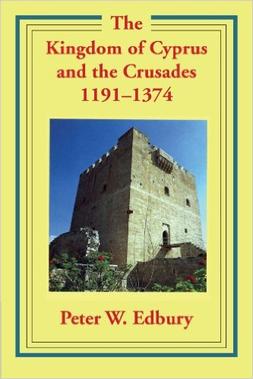 This is the "definitive" modern history of the crusader kingdom of Cyprus by the leading scholar, Peter W. Edbury. Professor Edbury  is the author of numerous books on the crusader kingdoms, their history, architecture, legal code and some of the leading figures in the kingdoms. This book is a concise, chronological history of roughly the first two hundred years of the crusader kingdom, starting with the conquest of the island by Richard I of England in 1191 and ending with the war with Genoa in 1373-1374. The latter triggered the economic decline of the island, and saw the slaughter of many of the noblemen descended from the Syrian nobility, among them the last Ibelin. It is an absolutely essential source for anyone interested in medieval Cyprus, and an excellent introduction to the last but most enduring of the crusader states.

Edbury writes in an easy, straight-forward style, avoiding the excessive use of footnotes and not overloading the text with his evidence. Indeed, unlike many academic works, he is clearly concerned with telling the story of Lusignan Cyprus  rather than debating with his fellow scholars about sources and interpretation thereof -- perhaps because his subject matter has not been as heavily researched as, say, the Kingdom of Jerusalem or the various crusades.  The result is a book that intrigues and inspires greater curiosity, rather than bludgeoning the reader with details or debates about arcane topics.

The only weakness of the book is in its admirable (but inhibiting) goal of covering two hundred years of complex history in just over 200 pages. Inevitably, some events are condensed and simplified, perhaps, in some places too much so. For example, Edbury follows the conventional (but patently absurd) version of Guy de Lusignan's arrival on Cyprus, suggesting Guy de Lusignan arrived on a depopulated island whose remaining population was happy to receive him -- despite that same population of 100,000 having just driven the Knights Templar from the island with an armed insurrection!  Ultimately, however, occasional oversights such as this are a small price to pay for getting such a great deal of fascinating history in a few hundred pages. The greater frustration is that after Edbury creats an appetite for more in-depth study of the crusader Cyprus, one discovers there are not the usual plethora of books that look more closely at individual aspects of the history available on the market today.