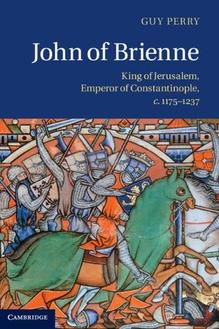 This is a solid, scholarly biography of a largely forgotten figure of the 13th century. Like the more familiar/famous William Marshal, John de Brienne rose from younger son to ruler of a kingdom. In Marshal's case, as regent for Henry III, in John de Brienne's case as a crowned an anointed monarch, first King of Jerusalem and later Emperor of Constantinople. Yet his life, so typically medieval in many ways, was filled with many disappointments and set-backs as well.

Perry provides excellent context and background for his biography. I found his analysis of the role of the Champagne in the "Latin East" particularly enlightening. The book also shines a light on patronage systems generally.

Disappointing, however, was that despite all the careful analysis of events, the character of John never came to life. I was left feeling I did not know him or what motivated him, much less what he felt -- for his wives, his daughter, his subjects -- anyone! This was less the author's fault than a function of the kind of sources he had to rely on. John left no diary and few letters, and charters make for dry reading.