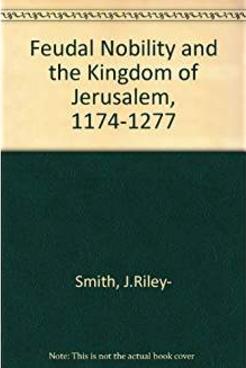 This book by one of the great 20th century historians of the crusader states is an invaluable resource. It is divided into two parts. The first “Lords and Lordships” provides a wealth of information in concise and readable form about the economy, social and legal structure, and the administration of the crusader states. The second part, “Constitutional Conflict,” looks at the sophisticated legal issues surrounding the governing of the kingdom and the school of highly educated and subtle jurists that evolved highly sophisticated theses on feudal government.  It also provides a chronology, two genealogical charts, and lists of the regents and lieutenants of the Kingdom of Jerusalem.

The first part on Lords and Lordships was particularly valuable because the information provided is relevant to any study of the crusader states, regardless of focus. It is, of course, a gold mine to a novelist, who needs to be able to describe everyday life in the Holy Land in this period. The second part is very legalistic and many readers without a legal background or interest in constitutional issues of a long-since defunct state may find it tedious. The conclusion Riley-Smith draws from his own research in two short pages was also sadly unsatisfying, as it seemed to answer a question that had not been asked, or at least failed to address many questions that I still had. However, even this second part shines a needed light on the high levels of education and the sophisticated reasoning of elites in the crusader states.