Feudal Monarchy in the Latin Kingdom of Jerusalem 1100-1291

Although first published in 1932, this is a gem of a book for scholars and serious laymen interested in the crusader states established in the Holy Land following the First Crusade. La Monte’s principle thesis is that the crusader states preserved feudalism in its “near perfect” form, at a time when powerful monarchs in England and France were gradually but systematically weakening this form of government in favor of more centralized states, authoritarian state. While the debate is academic, the evidence La Monte marshals to argue his case is a gold mine of information about the political and legal structures that formed the basis of society in the crusader states.  This book makes it easier for the reader to both picture and understand these fascinating states at the interface of Christianity and the Dar al-Islam.

After a short summary of the history of “Outremer” from the founding of the first states in the wake of the First Crusade to the fall of Acre in 1291, La Monte offers chapters on the most important administrative institutions of the Kingdom of Jerusalem followed by chapters on the relationships between the kings and their most powerful vassals and subjects. There is a chapter each on the High Court, the lesser courts, the principle royal officers, on the military establishment and feudal tenure system, and on the financial administration of the kingdom. In addition, La Monte devotes chapters to the relationship between the crusader states, between the Kings of Jerusalem and the Church, and between the Kings of Jerusalem and the privileged commercial communes, primarily from the Italian city-states of Venice, Genoa and Pisa.

Each of these chapters is valuable in their own right and can readily be consulted as specific questions arise. As a whole, however, this book greatly enhanced my appreciation for the complexity and yet well-documented and eminently reasonable nature of the political institutions that shaped crusader society.  What emerges is not so much “ideal” as comprehensible structures ― not all that different from what exists in many parts of the world today. 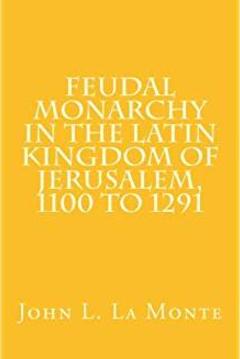