Flori is a French historian, who first published this biography of Richard the Lionheart in Paris in 1999.  It was this fact that attracted me to the book, as I felt a French historian would bring a different perspective (as well as a consummate grasp of French sources) to the work.

The book is divided into two parts. The first part is a description of Richard’s life in chronological order, in short, a traditional biography. The second part examines the degree to which Richard reflected and/or shaped contemporary ideals of chivalry, a concept, as Flori stresses, that was still inchoate during Richard’s lifetime. The book also provides maps of the Plantagenet territories in the West and of the Holy Land, as well as two genealogy tables that are very useful.

On the whole, the first part is concise, straight-forward and balanced. As expected, Flori is more critical of Richard than John Gillingham in his biography, but he does not paint Richard in a uniformly negative light.  As hoped, he is intimately familiar with the chronicles of the age, and subsequent historiography about Richard of England and his arch-rival, Philip II of France. Indeed, he errs on the side of citing too many sources to make the same point, highlighting nuanced differences in contemporary perspectives in a manner more suited to demonstrating his academic credentials than helping his reader understand his subject.  Moreover, he too often lets his sources speak for him rather than stating his conclusions confidently. Since most Medieval chroniclers were clerics, it is not surprising that the result is a rather bland picture overlaid by moralizing and preaching.  As a result, Richard himself never seems to come entirely to life. I felt I learned a great deal about what churchman (both English and French) thought of Richard, but gained no insight into Richard Plantagenet himself.

This part of the book is further marred by an obvious unfamiliarity with history beyond Flori’s central area of expertise, the Plantagenet-Capet conflict and France in the late 12th century. He makes silly errors with respect to the history of the Kingdom of Jerusalem such as claiming Isabella of Jerusalem married Humphrey de Toron “for love” (a princess at the age of 8?) or confusing Bohemend (son of the Prince of Antioch) with Raymond of Tripoli, and is evidently woefully ignorant of unconstitutional nature of Guy de Lusignan’s coronation, among other things.

The second half of the book in contrast is a useful, if somewhat academic, analysis of what chivalry was in Richard’s era. Flori explores 12th century perceptions of social order, the division of the world into those who pray, those who fight and those who work, and describes Richard’s relations with these three “orders.” He next looks at what and why prowess, largess and courtesy were the defining characteristics of chivalry, and examines the degree to which Richard fulfilled chivalric ideals. I found this part of the book intellectually entertaining and useful as a novelist writing about this period.  It remains flawed, however, by the dependence on essentially clerical sources. Knights and lords — much less ladies — do not have much of a voice here. In consequence I was left feeling I had only half the story. 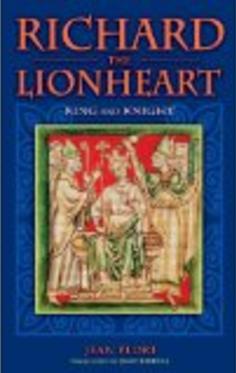