The modern world has coined the phrase “Renaissance Man” to refer to someone of diverse talents, bridging both arts and sciences, such as Leonardo da Vinci. Philip of Novare, although he lived in the 13th century, was such a man. He was a knight who actively participated in most of the military campaigns and battles of his age, yet he was also a poet, troubadour, philosopher, historian and lawyer.  Among his contemporaries, he was most famous for his legal handbook on the laws of the Kingdoms of Jerusalem and Cyprus full of practical tips for how to “plea,” i.e. argue a case.  Today he is remembered as the author of the only comprehensive narrative describing the baronial resistance to Emperor Frederick II’s rule in Outremer. Novare wrote his account based on his personal participation in the this war and his familiarity with the major protagonists of the conflict. Given his importance to our understanding of this period in the history of Outremer, I thought Novare deserved a short biography.

By the time Novare died, he was so well-respected that he served as the executor of King Henry I of Cyprus’ will in 1253, yet his origins are obscure, his parents unnamed and probably insignificant. Historians believe he derived his name from the town of Novara in Lombardy, where he was presumably born sometime between 1205 and 1208.  The date is interpolated from his autobiography in which Novare describes himself as a “page” to a certain Cypriot knight, Peter Chappe, taking part in the first siege of Damietta in 1218. Were he older than 13, he would almost certainly have been a squire, and if he were younger than ten it seems unlikely he would have been taking part in a crusade so far from home.

Apparently, Novare was already orphaned at this time but sufficiently educated that he could read to his master.  One day, Chappe invited the famous lord and lawyer, Ralph of Tiberias, to dinner in his tent, and Novare was asked to read aloud as entertainment.  Tiberias was so pleased with his reading that, when he fell ill, he asked Chappe to send Novare to him. In his memoirs, Novare admits that he was not pleased with this assignment, but he was an obedient boy and for the next three months found himself spending hours with the dying Tiberias.

It was a fateful meeting. Ralph of Tiberias has been called the “Socrates” of the baronial movement. He was, according to Professor Jonathan Riley-Smith, “an inspiration to succeeding generations…the sovereign of cleverness in court cases and in speaking beautifully and highly.”[i] At this man’s knee Novare learned the laws of Jerusalem and Cyprus, and it was to be his knowledge of the law, not his skill at arms that would make Novare’s fortune.

But his future was not clear, much less bright, in 1218 when Tiberias died. Fortunately, the orphaned and still very young Novare was given an undefined place in the household of John d’Ibelin, the Lord of Beirut.  Beirut and Tiberias had been friends, so one assumes that Tiberias commended Novare to Beirut’s keeping on his deathbed. As Novare grew up, he evidently moved from page to squire and was, eventually knighted. At some point before 1228 Novare was granted a fief on Cyprus by Beirut, and later one on the mainland as well, but they could not have been very large or very lucrative because Novare remained “poor.” Indeed, he makes multiple albeit vague references to his debts which were evidently so infamous that his enemies used them to try to manipulate him.  His financial embarrassment did not end until Queen Alice paid all his accumulated debts and granted him a money fief worth 1,000 marks of silver for convincing the High Court of Jerusalem to recognize her claim to be Queen in 1243.

This royal grant and the peace that came with the fall of the last Imperial stronghold, Tyre, paved the way for Novare to devote more of his time to legal activities and writing. His “History,” the account of the civil war 1228-1243 which is the basis of most of our knowledge of this conflict, was written shortly after the end of the war. His book on the laws and legal norms of the Kingdoms of Cyprus and Jerusalem, the Livre de forme de plait, appeared sometime around 1250. His last book, a philosophical reflection on the four ages of man (Les Quatre Ages de l’homme) was written shortly before his death in 1265. In addition to these major works, Novare tells us that he wrote poems on love, politics, and religion. Only a few of these have survived, but enough to testify to his wit, humor and talent, even if he does not rank among the great poets of his age.

What is striking about Philip de Novare’s life is that a man of obscure origins and limited financial resources could gain so much stature by his scholarship in the mid-thirteenth century crusader states. Novare was viewed by contemporaries as “the best pleader [i.e. lawyer] this side of the sea.”[ii] He was admired for this. His services were in demand, and he was influential as a result. That says a great deal about the society in which he lived: it was one that valued intellectual as well as military prowess, and it was less bigoted and class-conscious than later centuries.

Equally striking is that Novare was a man of action as well as letters. While so many chronicles were drafted in the peace and isolation of monasteries by men who had no familiarity with the clash of weapons much less the events described, Novare’s “history” was conceived as an autobiography. Novare knows his subject ― too well, some modern historians point out. Writing an autobiography, Novare makes no attempt at objectivity.  Novare is telling his story and he saw it. His friends and patrons are the heroes; their enemies are his enemies.

Novare was a close friend of Balian the younger, the eldest son of Beirut. They were much the same age, and the fact that Novare often refers to the younger Ibelin as his “compeer,” suggests they may have served together as squires and so earned their spurs together. Certainly, the first personal action Novare describes entails him refusing to take an oath of homage to the imperial baillies on Cyprus in order to remain true to “his lord,” the Old Lord of Beirut, John d’Ibelin.  Yet, after being pilloried for his “treason” and narrowly escaping an assassination attempt, Philip sends a plea for help to his “compeer” Balian d’Ibelin, a youth without the resources to actually help. It is as if Novare, at this point just 23-years-old, too in awe of Beirut to write him directly. He trusts that his “compeer” Balian will persuade his powerful father to come to his rescue.

Having so publicly cast his lot with the Ibelins, Novare had no choice but to stand by them through all that was to come. He took part in the sieges of Kantara and St. Hilarion in 1229, receiving a wound at the latter.  He also composed satirical songs about the plight of the Imperial garrisons, and poems predicting the treachery of the enemy after Beirut pardoned his enemies. Novare took part in the attempt to relieve Beirut in 1232, accompanied Balian of Beirut to Tripoli on his diplomatic mission to gain support of the Prince of Antioch, and he negotiated the surrender of the citadel at Kyrenia and Famagusta. Significantly, when in early 1233, the Lord of Beirut had a falling out with his heir Balian because of the latter’s marriage, Novare was one of just five knights who stood by the younger Ibelin. He took part in Balian’s daring and dangerous charge up the slope at the Battle of Agridi.

We know very little about Novare’s marriage. His wife has not been positively identified, but was probably Stephanie, the daughter of a Cypriot knight Berthelmy du Morf. We know of only one child that came of this marriage, a son baptized Balian after Philip’s “compeer,” Balian of Beirut. The marriage does not appear to have been particularly happy. Novare says nothing about it or his wife in any of his writing, yet he exhibited clearly misogynous tendencies. For example, he argued against the right of daughters to inherit except when there was no male heir, an extreme position in Outremer, a place where  women were recognized as heiress, regents, guardians. Many of Novare’s contemporaries argued the contrary, underlining the fact that his hostility to female inheritance was not “the norm.” Novare also expressed doubts about the value of education for girls; again an extreme position in a society in which most noblewomen were highly educated.

Novare’s final work, The Four Ages of Man, provides us with his own reflections on his rich life.  In retrospect, Novare divided life into four phases of twenty years each. The first phase of life, he says, is “childhood,” a period of learning from one’s elders. The second phase “youth,” is a period characterized (for both men and women) by “love, sin and folly, and of impetuous acts of violence and revolt.”[iii] Middle age, by contrast, is the when a man develops his greatest virtues and accomplishes his greatest achievements. It is characterized in men by prudence, loyalty and moderation, but, tellingly, Novare claims that in women “middle age” is a period of even greater folly than youth. Novare claims that women between 40 and 60 seek to regain their youth by affairs with younger men. (This sounds remarkably like a man speaking from bitter experience and then generalizing to an entire sex!) Finally, the last twenty years of life, “old age,” is a period granted by a benevolent God to give man time to “recall adequately God’s kindness and the debts he owes to his Creator.”[iv]

If we apply this measuring rod to Novare’s own life we see it matches remarkably well with the phases he lived through. From ca. 1205 to 1225 he was still learning at the knee of Tiberias and then Beirut. The two decades from 1225 to 1245 encompass all the deeds described in his history of the baronial revolt ― from his impetuous declaration of loyalty to the Ibelins when surrounded by Imperial loyalists and his taunting of his enemies with song, to his various, sometimes daring, deeds at arms.  The next twenty years, however, witness his rise to prominence as a lawyer and scholar. It is in these years that Novare is an advisor to kings. As he settles down to write his final work, however, his attention has turned to the hereafter.  He is clearly reflecting on his own feelings when he says the years after age sixty are a blessing. Most of his contemporaries, after all, including the Old Lord of Beirut and his “compeer” Balian, died before they reached that age. Nor did Novare live much beyond this marker. His name no longer appears as a witness after 1264 and his eldest son appears on the witness lists in 1269. Sometime between those two dates, Philip de Novare died.

Philip de Novare is an important character in my current series covering the civil war in Outremer, particularly in: Rebels against Tyranny. 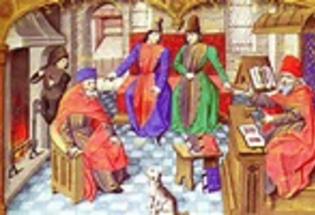